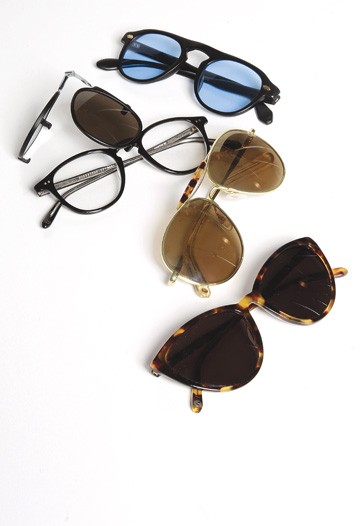 “Someone once told me that they just wanted to create beautiful things. This stuck with me, and essentially, I just want to create beautiful eyewear for people who appreciate true craftsmanship and interesting design,” explains Garrett Leight, who is launching his first, self-named collection of eyewear this spring.

If the name Leight in association with eyewear rings a bell, that’s because his father, Larry Leight, was one of the founders of Oliver Peoples in 1986 and sold it to Oakley 20 years later. When asked how he will differentiate himself from his father, Leight replies, “There will never be another Oliver Peoples.…It will be a great and, hopefully, similar journey, but I am a different person, and my sensibilities will show in my collection throughout the years.”

Garrett Leight’s collection is inspired by vintage designs, so the early days of Oliver Peoples do factor in. But the younger Leight goes further with this and takes iconic frames and gives them a Garrett twist, like the cat-eyes Susan Sarandon wore in “Thelma & Louise,” an aviator inspired by Hunter S. Thompson and another shape worn by Arthur Miller.

Leight explains, “I’m not one to emulate the obvious icons like James Dean and Steve McQueen. It’s more the characters who weren’t always in the public eye, but still had their own amazing and original style.”

The designer believes that his obsession with every millimeter of the frame will make for eyewear that has the perfect fit. Six styles, five made of zyl and the aviator of alloy and stainless steel, will wholesale from $80 to $150. There are polarized and nonpolarized options for the sunglasses, as well as an 18-karat gold plate frame to choose from. While the frames are put together in China, most of the materials are sourced from Japan. Leight already has a tight, but international, retail list, and plans to keep it that way. It includes Silver Lining in New York, Marc Le Bihan in Paris, A. Kinney Court in Venice, Calif., Opticien Loyd in Harajuku and Blinc in Aoyama, Tokyo.

Besides warning him of some of the dangers and common beginner’s mistakes in the eyewear business, he says, his father taught him, “Love what you do, stay humble and work hard. Nothing comes for free, and you always need to hope for the best and be prepared for the worst.” From his mother, Cindy, who was also one of the founders of Oliver Peoples, the lesson was to “be grateful and go with your instincts. Trust the people around you, because no one can do everything alone.”