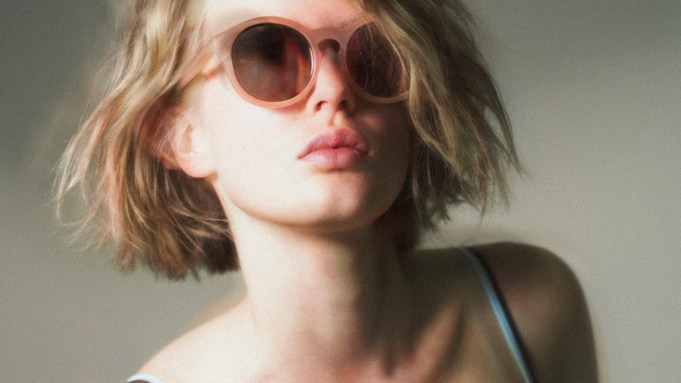 The collaboration was inspired by Self-Portrait founder and designer Han Chong’s own love of sunglasses. “Even before I was doing clothes I’ve always loved sunglasses; I’ve got about 50 pairs — they’re good for hangovers,” he said, as he talked through the collection at his East London studio. “When I was building this collection, I was thinking of me and my habit of buying sunglasses. I wanted these pieces that stand out enough but also something I could wear out all the time. I don’t like something that is too crazy, just special enough to get noticed.”

There are five styles and 15 stockkeeping units in the collection, which incorporates three colorways stretching from blush pink to mother of pearl and navy.

The styles were inspired by pictures of vintage eyewear that Chong found on Instagram, like those seen on the @forgotteneyewear feed, and by styles that he would turn up in the Opera Opera optician shop on Percy street in Covent Garden, downstairs from his apartment. For materials, he was inspired by the mix of materials in interiors images.

The collaboration came about after Chong discussed his desire to create a sunglasses collection with his sales agent Polly King, who introduced him to the team at Le Specs, which is also a client of King’s.

The collection was developed over a six month period of Skype sessions, during which Chong designed all of the styles with guidance from Le Specs’ creative director Hamish Tame. “I love Le Specs and how they inject sportswear influences, which is good to make [eyewear] more current because I don’t like it to be too sickly feminine,” said Chong. “I don’t like too much like very precise and perfect sunglasses; they freak me out a bit. These are a bit kind of cooler, I think.”

“At Le Specs we [consider deeply whom] we partner and collaborate with,” said Tame. “Joining forces with a strong fashion brand like Self-Portrait made perfect sense for us, with their fresh and innovative approach to ready-to-wear. After meeting with Han and designing the collection, his vision was exactly what we were after, with feminine yet sleek shapes imagined in a soft yet strong palette that feels new and exciting for the eyewear market.”

Highlights of the collection, which retails at a flat price of $125, include a pair of blush pink acetate cat-eye frames with a gold half-frame at the bottom, and mirrored gold lenses. There is also a dramatic sporty pair that has a white angular frame set over a larger cloudy pink acetate frame.

The accessible price point of Self-Portrait, which recently launched a bridal collection, has hugely contributed to its stratospheric rise in popularity since the brand’s spring/summer 2014 launched three years ago. It sold out on Net-a-Porter in three hours when it launched online there. It’s delicate and feminine Azalea guipure lace dress retails at $480.

It’s a pricing strategy Chong is keen to repeat for his debut into the accessories market. “I never buy sunglasses for more than 200 pounds [about $287 at current exchange] because you lose them. And unless they’re amazing I’ll pay usually at most 150 pounds [about $215],” he said. “It’s like that with accessories: you always want something new so I don’t want to spend so much money for one pair and then lose it.

And depending on the success of the collection, Chong is contemplating an own-name sunglasses licensee deal but is still in negotiations as to whom he will manufacture with. “I think accessories should be a fun thing so you don’t have to think about ‘Oh my God, I’ve scratched them!’ If I can get a licensing [deal], I’ll want to keep the price point,” said Chong.

This collection will be sold in around 150 doors internationally including Net-a-porter, My-Theresa, Selfridges, Lane Crawford and Shopbop.