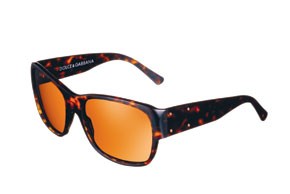 NEW YORK — The eyewear industry is coming off of a year filled with a plethora of new licensing deals, strong retail growth and enough celebrity coverage to establish the category as a true player in the luxury fashion market.

Those developments generated a positive atmosphere at the Vision Expo East trade show that ended a three-day run on April 13 at the Jacob K. Javits Center Convention here. Big-name manufacturers are growing their brand rosters and are indirectly helping smaller, independent firms gain traction in a competitive accessories market.

“We are growing the business for everyone,” said Vittorio Verdun, vice president of marketing for Luxottica Group, which holds the eyewear licenses for more than 15 luxury brands. “One of the main strategies of our company is we think eyewear has a place in fashion accessories and there is growth opportunity for everyone by our investment in bringing fashion to eyewear.”

While this form of vertical consolidation can be difficult for independent retailers, the market also has opened up for smaller brands such as Barton Perreira and Cutler & Gross to present innovative product offerings to such stores.

“We respect big businesses, as they have upped the ante for everyone, but we’re playing on a different field,” said David Duralde, vice president of creative development for Kenmark Group, which produces Vera Wang eyewear for mostly smaller specialty stores. “We’re building a base so that independent retailers can have something that is an alternative to the big houses. It’s not competitive, but complimentary.”

Blake Kuwahara, creative director at Base Curve eyewear, which manufactures collections for Carolina Herrera and John Varvatos, said the retail consolidation gives brands a chance to design for the luxury consumer who wants something different.

“Because of what the bigger players have done in retail, there is definitely a limited number of independent chains with large open-to-buys,” Kuwahara said. “But that just means we need to work harder to make interesting, unique product.”

Luxury eyewear is moving away from big-name designer logos and over-the-top temple treatments and is instead focused on iconic brand embellishments or, in some cases, purely clean looks.

“As consumers become more sophisticated, they don’t want the same things as other people,” Kuwahara said. “They want limited edition, unique. The big logo on the frame is starting to look a bit more pedestrian. People who have bought luxury for a long time are looking to differentiate themselves.”

Even Chanel and Dolce & Gabbana are paring down. Both produced by Luxottica, these two brands are known for strong logos and flashy temples. This season Chanel is using other themes from the brand such as chain symbols. Similarly, Bulgari incorporated its signature check print on the side of the frames.

“It’s more about embellishments than logos,” said Mark Ugenti, senior vice president of sales for Safilo USA’s sunglass division. “It’s about tying the details back to the handbags and shoes.”

Safilo’s Gucci brand is also utilizing iconic pieces from its accessories collection, such as bamboo and buckles.

“In the luxury sunglass arena, the trend continues to be not only understated, but more refined and more elegant,” said Michael Hanson, vice president and general manager at Ilori. “Details are more integrated and embellishments, while less overt than logos, have evolved beyond stones and crystals into enameling and foil printing.”

Sama eyewear, which produces eyewear for Badgley Mischka and Loree Rodkin, is introducing its new collection of understated eyewear called, rather appropriately, Incognito.

“Everyone owns logos and we’re over it,” said Joseph Tallier, Sama’s vice president of global sales. “People are walking around like billboards. This collection is responding to a thirst for understated elegance.”

Some manufacturers said the subdued look is a reaction to a weakened economy in which consumers shopping for eyewear are shying away from flashy product.

“During tough times, it’s a different way of expressing the brand,” Ugenti said. “It’s not ostentatious and people don’t really want to show off right now.”

L’Amy America, which produces eyewear for Proenza Schouler and Theory, also is straying from logos in its normally decked-out Chloé collection, instead using rich colors in earth tones to convey the essence of the brand.

Although firms are downplaying brand names, sunglasses are by no means minimal. Even the most classic collections are working in reds, blues, yellows and even dual tones.

“Everyone is really embracing color in eyewear,” said Ed Burstell, senior vice president and general merchandise manager of jewelry and accessories at Bergdorf Goodman. “Similar to other accessories categories, like bags or shoes, it can be the punctuation mark to an outfit, so we’re really excited to see it because we sell color so well.”

Christian Dior featured an entire collection in gumball colors such as pink, green and purple. At Betsey Johnson, the “Glitz and Glam” line included color combinations of yellow and purple and black and pink. Leiber’s frames showed mosaic temples in multicolored enamel.

Even Cartier, known for its low-key elegance, updated its classic collection to feature colored engravings on the upper corners of the lenses in such shapes as orchids, panthers and dragons.

“Color is exciting for us,” said Frédéric de Narp, president and chief executive officer of Cartier North America. “Women think of Cartier as having classic design and timelessness. But color is another way we embrace that.”

The oversize style that celebrities such as Nicole Richie and Sienna Miller helped bring back from the Sixties is still a trend, although the scale is shrinking.

“Eyewear on both ends is either really small or large,” Kuwahara said. “We’re still seeing them oversized on the large end, but the ‘frames-on-steroids’ look is over. Vintage looks are still key, but we’re moving out of the Sixties and into the Seventies and Eighties.”

Oliver Peoples launched its latest oversize shade, the Sofiane. In the 20 years since the brand made its debut, it has rarely incorporated flashy logos or complicated temple treatments.

“Maybe other brands finally realized that the consumer they’re after doesn’t want something like that,” said Larry Leight, founder and creative director. “But you must have enough faith and confidence to grow the brand without recognition, which isn’t always OK for other brands who normally rely on that. I get wealthy people in my store all the time saying, ‘I never buy brands with logos. I’ve been buying yours for 20 years.'”