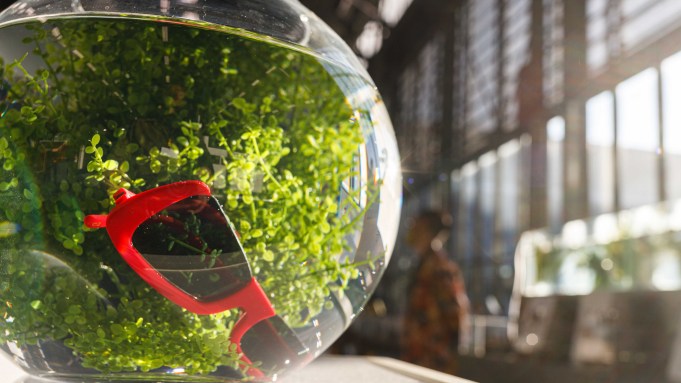 The eyewear industry — from Europe at least — gathered for the first time in two years late last month at the Villepinte exhibition center north of the city.

Running Sept. 24 to 27, Silmo gathered some 500 exhibitors, compared with 970 in 2019. Among the majors, Safilo and Dita were notable for their absences.

Visitor numbers were not available at press time.

After a challenging 2020, exhibitors reported strong sales this year, and opticians, having not bought inventory last year, were keen for new products.

“Our distributors last year sold more than they bought, 45 percent of distributors didn’t buy anything. For that reason, we started 2021 really well. I thought it would only be the first quarter, but for the moment, it’s ongoing,” he added.

World market leader EssilorLuxottica was showcasing its Ray-Ban Stories concept in partnership with Facebook, soon to launch in Europe after a successful introduction Stateside. “It’s the first time we’re exhibiting as a merged group,” said Chrystel Barranger, president of the firm’s European arm.

Following a difficult year in 2020, she said, “We’re pretty happy with business in Europe, although things are still difficult in Asia and South America.”

At the show, she said, “people are really keen to see what’s new, to discover the innovations. Their business is bouncing back.”

But supply chain difficulties have hindered the market.

Several exhibitors said the context of the past few months had favored suppliers that can manufacture closer to the market of consumption, and this has also benefited technologies like 3D printing and sustainable frames.

Sébastien Brusset, chief executive officer and creative director of Lyon-based Jaw Studio, said, “The pandemic has highlighted the need for local production. Lots of products were out of stock. We are trying to put in place tools to work more locally.”

Germany’s Mykita echoed this. “We have a very close network of suppliers within Europe, we are not dependent on imports from Asia, that’s been an advantage,” said Julia Mehlhorn, the firm’s head of brand marketing. “We feel we’ve become even stronger.”

Highlights on the company’s stand included the Studio 13 concept, with graphic frames combining acetate and proprietary 3D-printed material Mylon in a patented process with a retro shape and plays on transparency.

Many buyers were playing it safe, Mehlhorn said. “As a result of the pandemic, people are looking for more timeless styles, it is less dependent on trends.”

“The customer wants safe products, they don’t want to experiment,” agreed Marcolin’s Jove. “They want to buy the brands they are sure they will sell.”

There were opticians shopping for novelty, however.

“I’m looking for something that really stands out, something colorful, something fun,” said Brigitte Berman, owner of Les Opticiens du Bac on Paris’ tony Left Bank.

Sustainability was one area where ramped up innovation was tangible, also providing leads for countering supply chain issues.

Belgian 3D printing specialist Materialize, for example, present in the Futurology space focusing on new technologies and innovations, was hoping to convince optical players of the relevance of its model.

“Digital printing allows for less equipment investment and less logistics,” said Cedric Decroos, the company’s eyewear project engineering team leader. “We are able to reduce the number of components. What we are doing is much more sustainable than what is already out there, there is much less waste in our flow, because we only use the material that is really needed.”

French company Sintermat offered the possibility to recycle production waste to create new materials. “In eyewear, 70 percent of the plastic sheet used is waste, and we can reuse that,” said sales agent Eddy Baulot. “Aesthetically, it also offers something different, and people have been really interested.”

Spain-based Sea2See, launched in 2016, makes its frames from recycled ocean waste, mainly sourced in Africa by paying fishermen to collect plastic detritus. The company has seen exponential growth since, and is now distributed by 3,800 opticians, mainly in Europe. “The next step is going into the U.S.,” said founder François van den Abeele.

While optical giants have approached him to use his material, he has so far turned down all but co-branded partnerships, he said.

The product has the advantage in the current context of not being susceptible to supply chain tension. “I have enough material now to produce for 10 years at least,” he said – currently the company’s foundation is financing the construction of a recycling plant to transform excess into yarn for the textile industry.

Based in Nantes, France, Waiting For the Sun, which specializes in biodegradable frames made from bio-acetate, introduced its first line fully made in France. Called Archives, the collection is around twice the price of the label’s core line, at around 125 euros wholesale for sunglass frames.

Manufactured in specialist factories in China and South Korea, its core range suffered due to the supply chain issues of recent months, said logistics and technical director Leonard Le Bozec. “It’s impacted us quite a lot, with delays in deliveries, closed borders and sourcing difficulties,” he said.

In the startup space, Valencia, Spain-based Proud was highlighting its fully biodegradable frames in acetate made with cotton, which has the advantage of being flexible, unlike most other eco-options in eyewear, according to founder Marce Garcia Soto.

In other show news, the prestigious Silmo d’Or award for technical innovation in eyewear went to Austria’s Rolf Spectacles for its glasses with a screwless patented hinge that is 3D printed at the same time as the frames, reducing the number of suppliers and parts.