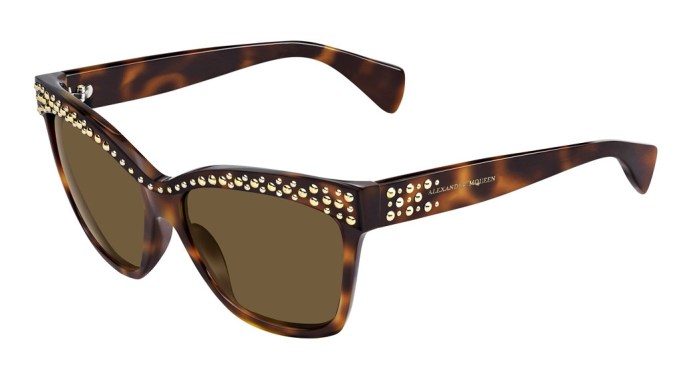 New fashion brands are entering the eyewear arena for 2014. Marchon launched the G-Star Raw collection, which features the same industrial details as the denim line: zipper pulls and the “G” serif incorporated into end-pieces, grommets on temples and style numbers printed on the outside of frames. Frames will retail for between 120 and 150 euros, or $162 and $202.50 at current exchange.

At the three European designer lines Marchon launched at last year’s show — Chloé, Valentino and Ferragamo — signature elements like Valentino’s pyramid stud and Chloé’s micro studs were incorporated into acetate styles, while metal and acetate layering produced a striped effect on the front of Ferragamo frames.

“We’re investing heavily into the European markets,” said Marchon president and chief executive officer Claudio Gottardi. “We’ve grown there by 25 percent each year for the last four years and we’re very bullish because the European economy seems to be doing well and the American markets are holding.” The company added direct sales channels in Portugal, Greece and Turkey, and earlier this year acquired the Scandinavian eyewear company Scaga.

Marchon has also signed a deal with Google and its Google Glass technology, but Gottardi said a non-disclosure agreement prevented him from sharing details. Worth noting: The company holds the license for Diane von Furstenberg eyewear, and the designer has previously used the glasses in her runway show. Other technological initiatives at Marchon include developing glasses that measure body functions, 3-D printed frames and Flexon memory metal frames.

Despite the recent press that no-frills eyewear brands have garnered of late, recognizable names still drive the sunglass market, where designer frames retail between $250 and $500, with some brands, such as Judith Leiber, going into the $700 to $800 range.

“There has been polarization in the marketplace. Bridge has been a long driver in the market but luxury is taking off once more in terms of brands and retailers,” said Ross Brownlee, president of Safilo Americas. “Luxury brands are benefitting from the wealth effect in healthy stock markets.”

The company’s latest launch is Fendi eyewear, a 15-style collection being introduced in January at the same time as Bobbi Brown eyewear, which will match frames to a woman’s skin tone and face shape.

“Branded eyewear is still very relevant across all price points,” said Luxottica’s Milena Cavicchioli, vice president of marketing. “But there is a greater need to create relevant stories, so we are creating more special projects and capsule collections than before.” For example, Chanel will launch a range of glasses with stingray temples based on the work of 19th-century artisans while Ray-Ban created a capsule of aviators with pastel frames and lenses.

Cavicchioli also noted the need for a new retail showcase for sunglasses at the midrange price point. “The department store model of glasses stuck in a wall doesn’t tell the story. We’re looking to reinvent this by looking at how the cosmetic industry shows its product,” she said.

“The company is going through an evolution, having changed ownership from Diego Della Valle to Pi Partners last year. We are poised for growth, particularly in the U.S. market,” said Marcolin’s U.S. chief executive officer Fabrizio Gamberini. The company is beefing up its U.S. retail distribution and looking to acquire more firms as well as sign new licensing deals to enhance its current portfolio of Swarovski, Roberto Cavalli, Diesel, Montblanc, Tod’s, Kenneth Cole, Cover Girl and Timberland.

Other launches at Vision Expo included Ann Taylor at L’Amy, Ted Baker at Tura, Phillip Lim and Prabal Gurung at Linda Farrow, and a collaboration between Oliver Peoples and Isabel Marant.