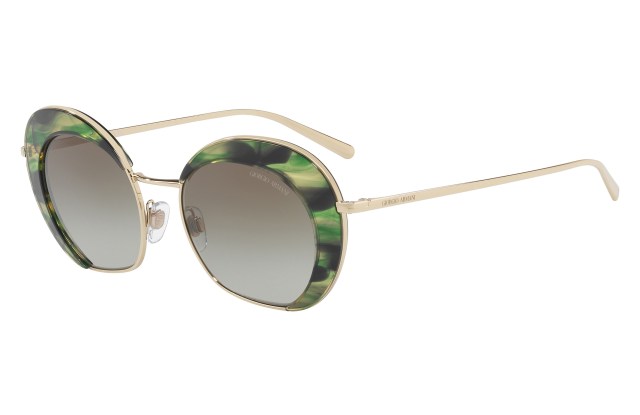 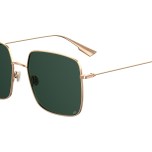 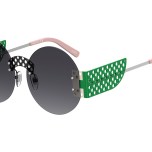 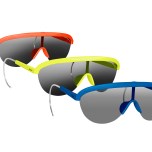 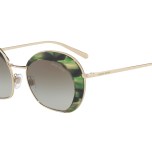 The Nineties are back on fashion’s runways, and eyewear is following the trend.

As Vision Expo West gets set to run from Sept. 14 to 16 at the Sands Expo in Las Vegas, Nineties-style shields, pastel lenses and lightweight metal frames will be among the most directional looks in the sunglass category for 2018. In addition, Space Age materials, new lens technology and more integrated “smart” features are on the horizon for both sun and optical eyewear.

Within the designer licensing world, a slew of new deals will see the debut of Moschino and Rag & Bone eyewear at Safilo, Moncler at Marcolin, and Longchamp at Marchon.

“The role of trade shows is ever-changing, but Vision Expo is still a major showcase for us,” said Thomas Burkhardt, senior vice president of global brands, marketing and design at Marchon. “We are excited to be unveiling Longchamp, one of the few globally recognized brands that has never had an eyewear license. You’ll see that translate into an elegant timelessness that plays with color.”

Marchon also holds the license for several designer brands that have newer creative directors, such as Raf Simons at Calvin Klein; Jonathan Saunders at Diane von Furstenberg; Natacha Ramsay-Levi at Chloé, and Paul Andrew for footwear at Salvatore Ferragamo.

Ramsay-Levi didn’t do much to deviate from the oversize metal frames favored by her predecessor Clare Waight Keller, though Simons’ vision for Calvin Klein brought a new, distinct point of view to the eyewear, as well as more high-end retailers interested in picking up the brand. At Ferragamo, the Fiore heel shape is translated into several frames with flower silhouettes.

“People are looking for unconventional and unique, such as alternative bridges and hinges and asymmetric shapes, pastels for men and bright red, yellow and blue,” said Burkhardt. “The Eighties and Nineties are still playing a big theme in reinvented retro.”

Fabrizio Uguzzoni, Luxottica’s president of wholesale, North America, said he saw five major trends across all the group’s brands, which include Ray-Ban, Oakley, Chanel, Valentino, Prada, Miu Miu and Dolce & Gabbana. He listed them as “the frame-within-a-frame, open or cut-out structures, layering of materials and minimal wire frames.”

For example, at Prada, various materials are suspended in acetate, and at Valentino, the lenses are cut out to create passages of light through the frames.

At Luxottica’s cash cow Ray-Ban, two new products will be introduced at Vision Expo West — the Blaze collection, a new aviator style, and The Marshal, a new icon style which fuses the angled profile of The Hexagonal and the flat upper bar and temples of The General.

Also making its debut at VEW is Oakley’s Crossrange, equipped with interchangeable nose pads and temples allowing men to adapt style and performance depending on use.

At Marchon’s performance division, Nike will unveil some new women’s styles as well as its first optical collection.

Alessandro Marcer, vice president and creative director of Safilo, said the company journeyed back to the Seventies, Eighties and Nineties for inspiration for its house brands Polaroid, Carrera and Oxydo, as well as licenses for Dior, Moschino and Tommy Hilfiger.

“The most important thing that distinguishes the new frames is the oversized effect of the frames, which we call a new vintage evolution,” he said. “We go back to a romantic nostalgia and a new concept of youth, which is about self-expression and street art blending into high fashion. We look a lot at the post-Internet generation where Nineties street style is reinterpreted by Generation Z.”

That manifests itself in shield shapes at every brand from Polaroid to Fendi. These aren’t the ski-goggle shields of old, but rather flatter silhouettes with two distinct lenses cut out for each eye. Carrera’s America style, Oxydo’s 2.6 and Moschino’s 0004/S style all interpret this in different ways, the latter with neon details and studs.

Over at Marcolin, smaller-profile frames are trending at the Balenciaga license while Tom Ford and Roberto Cavalli are going big. There is a big sport influence at Moncler, whose heritage is in skiwear. “It is very colorful, with smart grip technology around the ears and nose,” noted Cara Diorio, Marcolin’s U.S. director of fashion brands.

Other non-prescription lens treatments include hologram-like snake motifs at Roberto Cavalli and Barberini-tempered glass at Ermenegildo Zegna. In general, the flash, or mirror effect is still trending but it’s softer and more gradient, such as the antique pink at Tom Ford.

Metal frames are also given a more luxurious treatment by taking on articulated architectural details that offer a high perceived value for luxury brands. “We are talking about an elevated design, season-less pieces, like at Dior and Boss,” said Safilo’s Marcer.

At niche Southern California brand Dita, cofounder Jeff Solorio was inspired by innovation in the transportation industry, both past and future. The brand often repeats popular silhouettes, but this season created two new frames: The Endurance88, an oversize plastic aviator inspired by muscle cars and the men who drove them, and the Nachtone, a futuristic motorcycle wraparound. The Endurance88 is made from a stainless steel core sandwiched between layers of acetate and the Nachtone has two flat lenses encased in plastic.

Sama Eyewear, an independently owned luxury brand based in Los Angeles, was the first to introduce titanium frames to the market in 1987 as well as laser-cut frames. Now Sama founder and designer Sheila Vance said she’s preparing to introduce a third, Space Age material in late 2017.

“Right now the industry uses titanium, nickel alloy and plastic, but I’ve been developing a new material that so far has only been used by NASA. It is lighter and stronger than titanium,” she said.

In addition, Vance said she has partnered with a tech giant to develop new smart technology that will allow glasses to have invisible features that make them into “a cross between an iPhone and a Fitbit.”

She added, “The best part is they will look just like regular Sama eyewear, you can’t see the technology at all. And you will be able to change the color of the glasses with just the push of a button.” The prototypes should be ready by spring 2018 and the price will approximate that of iPhones.