A Bijou for Jimmy Choo

The British brand has opened its first stand-alone men’s store in Europe inside London’s Burlington Arcade. 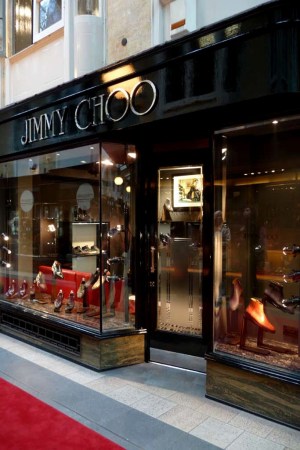 Air Mail Teams Up With Stubbs and Wootton

J Balvin on His Air Jordan I Collaboration Sneaker

LONDON — The Jimmy Choo man finally has a home — or at the very least a luxury hangout — in Europe. The British brand has opened its first stand-alone men’s store in Europe inside London’s Burlington Arcade, off Piccadilly.

The store, which spans 441 square feet over two floors, stocks the full range of footwear from lace-ups to slippers to biker boots and sneakers. It comes on the heels of openings in Osaka and Tokyo earlier this year.

“We’re pleased to be in our hometown, and the Burlington Arcade dovetails perfectly with the brand’s positioning,” said Jimmy Choo chief executive Joshua Schulman. “Literally and geographically, we’re located between the international glamour brands of Bond Street and the haberdasheries and tailors of Savile Row.”

The interiors are meant to evoke a polished gentleman’s club — the sort of place David Niven might duck into for martini, a cigarette and some clever banter. The walls are covered in charcoal gray flannel, while the furniture is mid-century modern, with lamps by Joe Colombo, tufted leather sofas with clean edges and a Scandinavian feel, and a spider-like Serge Mouille chandelier.

Ebonized wood and English pewter are among the other materials used. The ground floor is meant for browsing, while the upper floor is a more private space where clients can try the footwear on.

“I want it to feel as though you are walking into a gentleman’s club, with all the luxurious appointments and comforts,” said Tamara Mellon, the brand’s founder and chief creative officer. “It’s a mod update on an English men’s smoking lounge.”

Schulman declined to give sales projections for the store and the men’s collection generally, saying it was early days. “The goal in these first seasons is not about volume, but about positioning the brand,” he said. Jimmy Choo also has wholesale clients worldwide including Harrods, Selfridges, Saks Fifth Avenue, Barneys New York and Neiman Marcus.

New retail units are in the pipeline: at the end of January, a Jimmy Choo men’s store will open in Hong Kong at Elements. That store will span 540 square feet, and will be the first men’s unit to sit alongside a women’s Jimmy Choo.

“There will be a passage between the two stores,” Schulman said. “We see it as a gateway to China, and a way for us to observe how the local clientele is buying,” said Schulman. He said Choo wants to open in Milan and New York, but that will happen “over time,” and there are no immediate plans.

Burlington Arcade is home to an eclectic mix of shops selling merchandise ranging from antique silver and jewelry to cashmere knitwear. Early next year, parts of the early 19th Century arcade will be restored in a 2.5 million pound, or $4 million project, for which Peter Marino has been a consultant.

The Jimmy Choo store is located directly across from Church’s and not far from another newcomer, Lulu Guinness.

In other Choo news, Dana Gers, who recently moved to London, has been named to the new position of senior vice president of communications. She will report to Mellon and Schulman, and will oversee global public relations, marketing, and visual merchandising. She had been doing the job on an interim basis since May.