The company is gearing up to unveil its first collection since founders Kari Sigerson and Miranda Morrison parted ways last March. 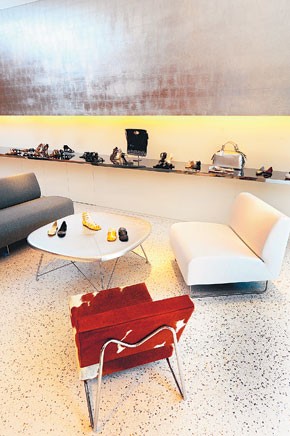 NEW YORK — Sigerson Morrison and its contemporary counterpart, Belle by Sigerson and Morrison, are gearing up to unveil their first collections since founders Kari Sigerson and Miranda Morrison parted ways with the company last March.

“We’re calling this a refreshing of both brands, because what we’re doing is taking the heritage of each, taking all the things that have always been fabulous — and looking to make Sigerson Morrison and Belle even more relevant,” said Susan Itzkowitz, president of Marc Fisher Footwear, the parent company that acquired the 20-year-old footwear brand in 2006.

In addition to enlisting a design team in Italy, both labels will add an assortment of silhouettes and styles, heel heights, materials (including ethically sourced fabrics) and color palettes for the spring 2012 collections, which will both bow at the FFANY show next month.

Sigerson’s newest offerings culled inspiration from a trip around the world — think laser-cut block heels and Lucite-detailed wedges that resemble Moroccan lanterns and Tokyo skyscrapers — while Belle’s collection of flats and wedges with metal studding and colorful metallic fixings are perfect footwear for the summer music festival circuit.

Design sensibilities aside, Itzkowitz said the goal is to grow both brands. Marc Fisher is looking to achieve a 30 to 35 percent increase in sales next year for the lines, with a focus on building major business through leading department stores, independent retailers and various Web sites.

In addition to collections containing 10 to 20 percent more styles each, Itzkowitz said attention has been paid to lowering the price points for the lines. On average, retail prices for Belle will range from about $175 to $250 and for Sigerson Morrison, price points will start at about $300 and go up to $450 — a 30 percent decrease from the previous entry price point of $395.

She also revealed that Marie Claire’s style and accessories director Taylor Tomasi Hill has been brought on board as creative consultant to work with the labels in terms of trend direction, developing new ideas and merchandising the lines. Tomasi Hill will also have a hand in future advertising campaigns, marketing initiatives, events and social media projects.

“Taylor is our style guru. We have such a respect for her and her taste level and trend knowledge and her vision in terms of fashion. She’s always been a tremendous supporter of the brand and we’re very excited to start this collaboration with her and see where it will evolve to,” Itzkowitz said of the new position.

Tomasi Hill added, “I’m looking forward to working together with Sigerson Morrison and contributing my ideas on the design aesthetic, while still keeping true to the brand heritage. With plenty of rich influences to draw from the archives, I’m confident this will be an exciting collaboration.”

The two brands have long been intertwined, and in the coming seasons, the company’s goals are to develop clear and separate identities for each, according to Marc Fisher’s director of marketing and public relations Christina Tung, who also spearheads all social media outreach. She cites Belle’s upcoming partnership with Madewell this fall as a perfect example.

“As sister collections to larger brands, Madewell and Belle by Sigerson both share that cool boho rocker vibe,” Tung said. She added that Belle will take over Sigerson Morrison’s Prince Street store for Fashion’s Night Out in September, throwing a house party (and after-party) complete with kegs, an in-house tattoo artist and a DJ spinning classic house party tunes.

Both entities will also undergo Web site overhauls for more functionality on mobile devices, as well as develop strong social media presences across the major digital platforms — but Tung said each label’s social media strategy is brand-specific. For example, Belle’s Tumblr targets street style girls while Sigerson Morrison’s approach is geared more towards reaching fashion news blogs. The former’s tweets (@bellebysigerson) are those of an underground party girl, going out in the Lower East Side, Williamsburg, Bushwick and Greenpoint. She hangs with a skater crowd and loves the Nineties, Tung said. Sigerson’s tweets (@sigersonshoes) highlight the best of what New York has to offer, from art to film to food.

“We’ll always work with print, but the casual and democratic vibe of blogs fits so well with our brands, especially Belle. The social media community feels so tight and cozy, because you’re literally one click away from everyone,” Tung said. “Belle and Sigerson have become fast friends with blogger all-stars and up-and-comers alike. The top bloggers have such a loyal following and would make great partners. We definitely have our eye on a few. There is so much potential to explore, it can make your head spin.”