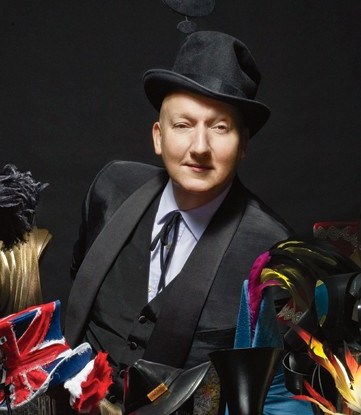 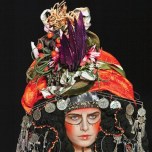 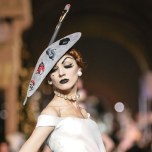 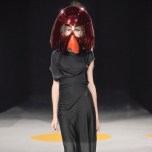 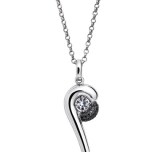 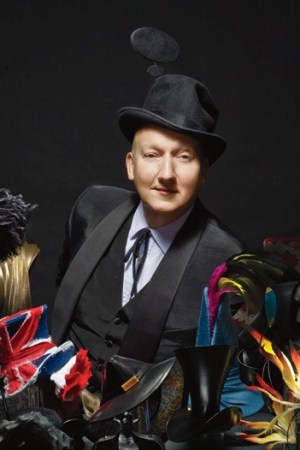 Corum By The Numbers >>

Marking the 30th anniversary of Stephen Jones Millinery, the MoMu fashion museum in Antwerp, Belgium, hosts “Stephen Jones & the Accent of Fashion,” a retrospective of the designer’s oeuvre, starting September 8 and running for six months.

“It’s extraordinary to have done this for 30 years. It still feels like Day One,” says Jones. “This is all my hats—it is like climbing into my mind.”

Among the donors are private local collectors Geert Bruloot and Eddy Michiels, who loaned more than 120 pieces for the show, including the early hats Jones designed for John Galliano.

“It all started with Geert Bruloot, who invented the Antwerp Six,” Jones says. “He has been a collector of my hats for years and he has over 200 that neither I nor John Galliano have seen [in years], and they will all be on show. The curators are creating the exhibition around me and it is fascinating to see someone else’s point of view.”

Jones points out that hats are becoming quite popular for museum fodder: Another anthology on the history of hats, which traveled from the Victoria and Albert Museum and recently closed in Brisbane, Australia, registered more than a quarter-million visitors.

“It is going to be a real adventure,” Jones says. “There are very few fashion museums. It’s quite amazing that the entire museum is dedicated to me. It’s strange to have your life on view.”

Few jewelry designers have an approach like Jig Pattni. For his bespoke pieces, Pattni interviews clients for about an hour to get a read on their personalities, likes and dislikes. “I ask them everything— foods they like, magazines they read, loads of different questions,” says Pattni, who often creates paintings to accompany his designs. “Then I take all those parts and translate them into shapes.” Pattni is a storyteller when it comes to his own collections, as well. His latest line is Scenes of Love, a spin-off of his Lust designs. The five styles follow a narrative arc, Pattni explains, “starting with a couple’s first meeting” (shown here), “to their first embrace, first kiss. Then they become one and, by the fifth, she’s in shivers.”

Apocalyptic undertones fueled Delfina Delettrez’s My World collection. Specifically, she took inspiration from the Mayans’ “Long Count” calendar, which predicts the end of a 5,126-year era in December 2012. Delettrez kept her dark sense of humor, however. One globe ring, for instance, opens up to reveal skeletons pulling sultry poses, with the inscription “2012 Is Now.” Earrings strung with leather tassels carry messages such as “Rock Until You Die.” Prices range from about $600 to $76,000. U.S. retailers include Opening Ceremony in New York and Maxfield in Los Angeles.

Less is more? Not when designers offer clever styles in two-for-one packages. They range from Longchamp’s reversible croc-print leather bags to Chrissie Morris’ sleek ankle boots that turn fl amboyant with the addition of an alpaca hair cuff. Others are taking a single piece a step farther: Glory Chen’s metal-heel pump transforms into a knee-high boot with the addition of a tall loafer spat.

Corum By The Numbers

Mihai Albu isn’t afraid of heights. The Romanian shoe designer used his training as an architect to create a towering 12-inch heel, made from three black wedges. “Everybody does wearable shoes,” Albu says. “I want to shock [people].” The shoes are by special order, and prices start north of $1,300 (Mihai Albu, Bucharest, Romania, +40.021.403.3115).

To complement his animal-print collection for resort, Giambattista Valli offers two pewter and enamel animal cuffs: a turtle with a turquoise cap and a leopard with green Crystallized-Swarovski Elements for eyes. Retailing at about $1,500, the pieces were designed by longtime Valli collaborator Luigi Scialanga. The cuffs will be available at bergdorfgoodman.com and neimanmarcus.com.

Dorothy and her ruby slippers have nothing on fall’s crimson accessories. From Givenchy’s bejeweled gloves to Dolce & Gabbana’s velvet heels, they offer a striking punctuation to the season’s dark trend—and a delightful way to be in the red.

Forget rainy days. The humble duckie is ready to get out of the muck, with designers adding splashy details to the distinctive webbed toe. Tommy Hilfiger’s interpretations feature 5-inch wooden heels on over-the-knee boots, as well as cropped booties in classic red, navy and hunter green.

Nicholas Kirkwood loves a good collaboration. In between designing his most diverse collection of shoes for fall—killer heels and fresh new daywear looks among the standouts—Kirkwood once again teamed with hot ready-to-wear houses Erdem and Rodarte for several co-branded looks that push footwear to its artsy side.

WWD: Do you have a dream collaborator?

Nicholas Kirkwood: Alaïa. But his shoes are so good already. He probably doesn’t need my help. I love his sensibility, and his attention to detail and quality.

WWD: How do you approach your collection with Rodarte?

N.K.: We take a maximalist approach. The shoes are always going to make a statement. We view it like we’re making an object. The platform can be an object by itself, or the heel can be, like this season’s molten candle-wax heel.

WWD: Would you ever do something a little more price accessible?

N.K.: Not for a long time. I’ve been asked, but I just don’t feel like it’s right for my brand image. You can tell immediately if a shoe is made in China. That’s not to say I would never do it, though.

WWD: What projects are in the works for spring?

N.K.: We’re going to be doing a yearlong collaboration with the Keith Haring Foundation, as well as a line with Peter Pilotto—it will be very different from Rodarte or Erdem. [They are] three very distinctive collections and all add a lot of diversity to the brand.

The sexy stocking is back. Racy variations of fishnet, lace and thigh-high tights were all over the fall runways, and will surely add some serious heat to cooler autumn temps.

From Bottega Veneta to Gurhan to Stephen Dweck, fall accessories are crawling with scarabs. The beetle’s ongoing ornamental allure dates back to the ancient Egyptians, who held it sacred for various reasons.

“Scarabs are supposed to bring luck and maternity,” says Aurélie Bidermann, who dipped the real thing in gold for her most recent collection. “I love the idea of how delicate yet imperial they are.”

Natalia Brilli associates the scarab with “rebirth of the ancient Egyptians, and death in the 17th century.”

And, according to Dweck, for whom the scarab has been a signature motif since the early Eighties (he considers the bug his mascot and has gone so far as to name it Adam: “First man, first beetle”), the symbolism is rooted in the superficial. “If a lady wanted to keep her beauty forever and ever, she’d pick a live scarab and put it close to her,” he says. “I don’t know what that scarab would do with her blood, but she believed in it.”

When Cynthia James was 16, she saw Motörhead front man Lemmy Kilmister rock out in Hyde Park, London. The following year, she got groovy at Woodstock, and later spent years as a dancer, with an affinity for Isadora Duncan. Suffice it to say, she’s a free spirit. So when James, who lives in Northampton, Mass., decided to launch her Jamescyn line in 2007, the bags were of a bohemian bent—oversize carpetbags and slouchy leather totes with raw edges. She’s already found a fan in one rock goddess: Kim Gordon, who bought one of James’ leather bags for her birthday this year ($200 to $500, Cathy Cross, Northampton).

Montblanc has looked to an unlikely source to satisfy the craving for the ultimate one-of-a-kind accessory: ink. Personal Code Ink is custom-made from an impossible-to-duplicate botanical code, each as individual as human DNA. Housed in a lacquered wood box along with the ink are two pens, a black-resin and goldplated felt-tip and a roller ball enhanced with mother-of-pearl and diamond details. Perfect for autographs or those who just want something no one else has.