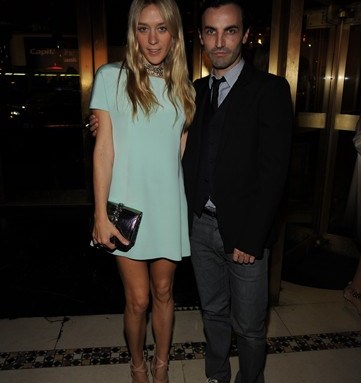 Barneys New York creative director Simon Doonan presented the Magazine of the Year award to Elle editor in chief Robbie Myers, and said he got himself into a “gay tizzy” after Myers tapped him to interview Madonna for the magazine this year. Doonan proceeded to embellish — actually, invent — Myers’ career path, joking that she started working for Larry Flynt at Hustler magazine, had stints at Juggs and even [Car] Mechanics Magazine before she took the helm at Elle.

Chloë Sevigny handed Balenciaga’s Nicholas Ghesquière the Designer of the Year award, describing her first pair of Balenciaga heels. “They must have been 5 inches high,” Sevigny said. “And I never felt more powerful walking down the street—that is, until the pavement met my face and I went down in them.”

“If you don’t wear leather, like me, you have to spend a lifetime shopping at Payless,” she said. Then, to smooth things out with the mass merchant, Hynde added: “Not that I don’t like Payless.”

McCartney said it was her goal to prove that leather isn’t luxury. She recalled a friend who accosted a woman wearing a mink, asking if she knew how many animals died to make her coat. “She responded, ‘Do you know how many people I had to shag — or screw, in American — to get this coat?’”

Rodarte designers Kate and Laura Mulleavy not only presented Vogue fashion news and features editor Sally Singer the Marylou Luther Award for Fashion Journalism, they also dressed her. Singer wore an ivory and navy knit skirt and top emblazoned with the name “Obama,” which the Mulleavys designed for Sonia Rykiel’s anniversary show.
Pharrell Williams, longtime friend of Innovator of the Year winner Lorraine Schwartz, credited Schwartz for teaching him what good jewelry really is. “When I came into meet Lorraine Schwartz, I asked her for H-color diamonds. She said, ‘No, that’s not what you want. You want D-color, that’s the best.’”

Other winners were stylist Cate Adair for Influencer of the Year, Banana Republic for Retailer of the Year and Emilio Pucci for Hall of Fame.