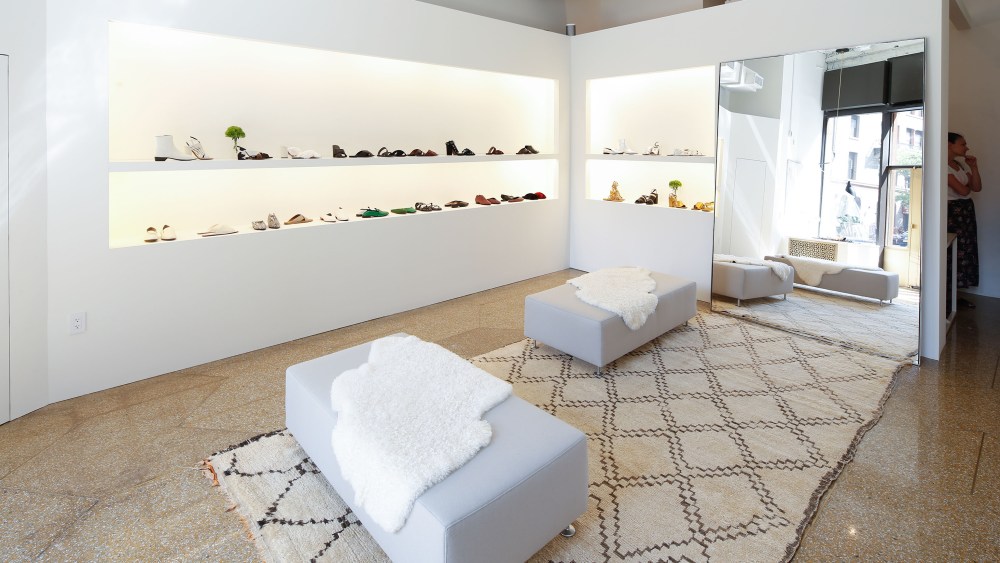 At 545 square feet, the store is a tranquil, minimalist shoebox, but a big step for the brand. It’s located in a landmark building formerly known as the Western Union Building, designed by Ralph Thomas Walker and built in 1928. Neighboring fashion retailers include Thom Browne, Nili Lotan and Issey Miyake, but the area isn’t known as a shopping district.

“There are lots of places to eat. There are fabulous people that live and work in the area and it does have some really incredible architecture,” said Sigerson, noting that the Herzog and De Meuron “Jenga” building is their neighbor. “So there are amazing things going on down here, tons of creativity, so we thought, ‘Well, let’s try it out, let’s see what happens.’”

The store was designed by Von Dalwig studio with custom David Weeks Akimbo lighting fixtures, Paonazzo marble from Italy, a vintage Moroccan carpet from Breuckelen Berber and Jasper Morrison Cappellini seating. It’s clean and bright, much like the Italian-made shoe collection displayed on the white shelving. Alumnae’s aesthetic is modern and understated. Current styles include python bootie/slingback hybrid flats that lace up, Kelly green ballet flat slides, and, on the ore-flamboyant end, fluffy rabbit fur slides in red, black or gray. Prices range from $425 to $1,150.

Sigerson and Axelson-Chidsey are both alumni of Sigerson Morrison, the shoe label Sigerson launched with Miranda Morrison in 1991. It became quite successful, attracting Marc Fisher as a backer in 2006, which ultimately led to the founders parting ways with their brand in 2011.

Spring 2016 was Alumnae’s first season. In addition to its own e-commerce, the line is carried at Barneys New York, which has had a department store exclusive on it. Other retailers include Ssense.com, FWRD.com and Lane Crawford, as well as specialty stores around the U.S.

Axelson-Chidsey put growth at 350 percent since Alumnae launched. “I’ve done this before and I know how hard it can be,” said Sigerson. “It hasn’t been a cake-walk per se, but response has been wonderful. We’ve carved out a very nice niche for ourselves with beautiful quality, low heels and flats that you can walk in and wear every day and you can build your essential wardrobe around.”