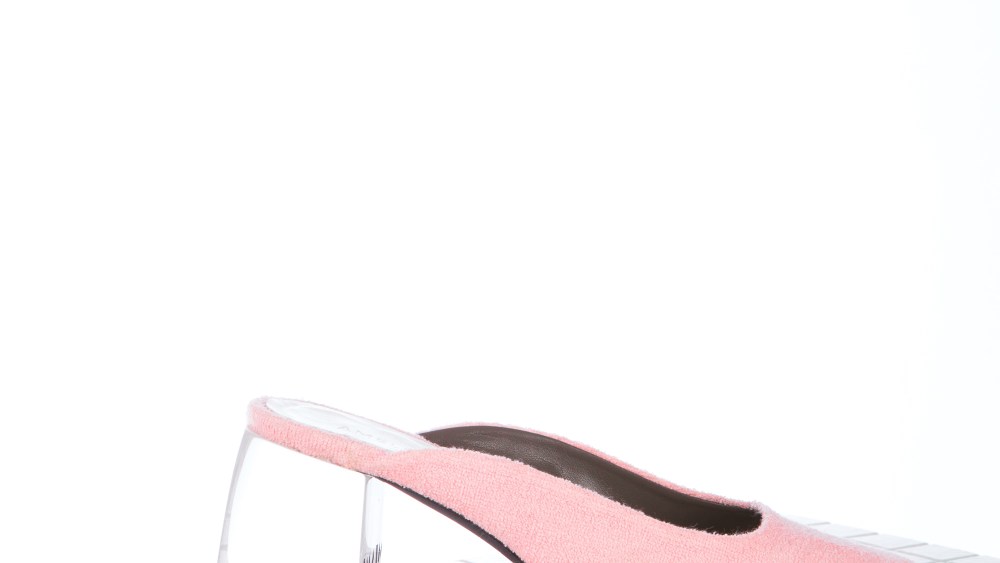 And with that, she has decided to forsake the traditional fashion cycle — closing her wholesale business, and no longer introducing collections each season, in favor of a slow-drip business proposition that will allow for greater creativity and selective, have-to-have-it distribution.

Pichard wholesales to Dover Street Market, Colette, Opening Ceremony and Browns amongst others. But this fall collection will be her last season to do so.

Going forward, her namesake label will collaborate with one or two third-party entities per season, developing capsule collections of product targeted toward regional preferences, weather and stylistic motives.

Updates to her permanent collection, with the introduction of a few new styles each season, will be exclusively available on AmeliePichard.com and in a forthcoming Paris boutique.

The first collaboration to kick off this new model of commerce will be with The Webster, tied to Art Basel. The line of pink terry cloth shoes and bags, some with Lucite heels inlaid with the word Miami in deco lettering — are aligned with the Floridian city’s balmy temperatures and penchant for flashy silhouettes.

Creating a full collection of shoes and bags each season — particularly in today’s globalized world — does not ensure success across a gamut of geography, Pichard said, as spring weather between key markets like Paris, Tokyo and New York greatly differs. As do those cities’ tastes.

“The seasons are totally messed up,” she said. “My label is a universe, but when I only have five models in a shop, the customer can’t feel my universe. The idea is to make something marketable with each shop, something new and a better fit for their customers’ style and the weather there,” she said. “The Miami collection is exciting for me, I can’t make pink sponge shoes for Paris.”

Pichard said the decision to change the cadence of her business came about after the success of her vegan shoe collaboration with Pamela Anderson.

While The Webster is an example for retail partners and Anderson one for persona collaborations, Pichard is also exploring work with artists and brands. “I want something logical, I don’t want to make things just to make things. We are not a big label, so I can,” she said, resolutely.

In creating limited terms with retail partners, Pichard will avoid overdistribution and a laissez-faire attitude by shoppers. “There is product [now] that you can see everywhere. It’s very complicated to find a good place between selling a lot, but not being too present because after that, people don’t care. I love my work and there are shops that love my work so it’s about making something logical together.

“Real girls who buy shoes don’t want something new each season, they need time to see the product and after that she will think about it and buy. I think girls need time — it’s the opposite of our life with Instagram, that you need to ‘buy it now’ I think they want to be sure about what they buy.”

Pichard’s artful designs and kitschy marketing materials have earned her a sizable Instagram following, closing in on 30,000. The hashtag #ameliepichardgirl has become an online status symbol for those seeking unique, directional product.

Such numbers have led Pichard to reinvest the money that she would have allotted to seasonal collections, toward an e-commerce web site and improved customer service.

A new web site will launch in tandem with Pichard’s forthcoming stand-alone store, her first, to be located in Paris’ Bastille neighborhood. Both are expected in March.