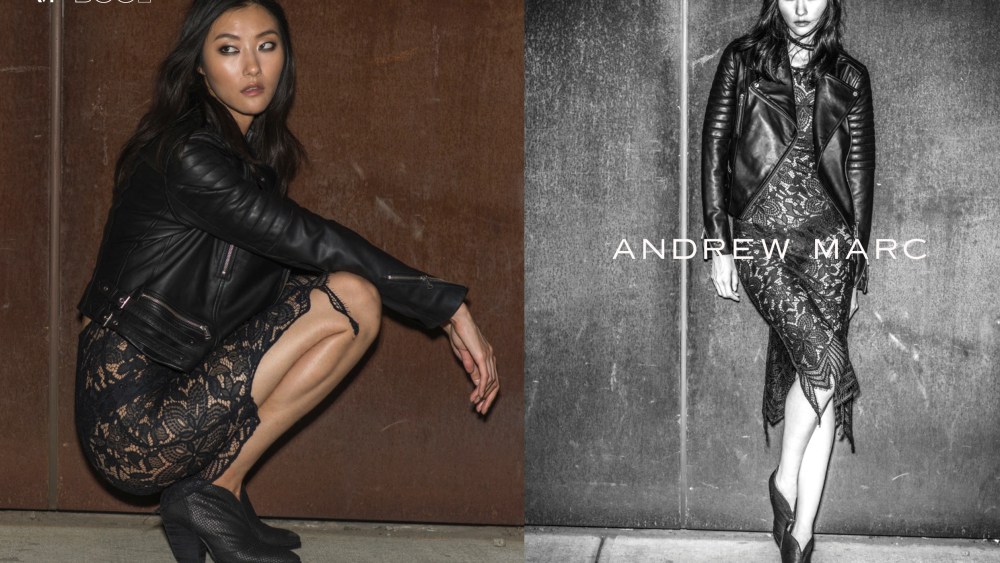 Andrew Marc is pushing further ahead in its quest to create a lifestyle brand. The leather goods specialist that has been owned by G-III Apparel Group Ltd. since 2008 will offer women’s footwear for the first time for fall.

The range, which will encompass a tight offering of eight styles of boots and booties in multiple colorways, will complement the brand’s core outerwear and be sold exclusively on the Andrew Marc web site beginning in October. The label has produced men’s footwear under license for at least four years, but the women’s line will be manufactured in-house.

“The Bass team helped us,” said Marlene McDade, vice president of brand marketing and licensing for G-III. The company also owns the venerable G.H. Bass footwear brand, which is famous for its Weejuns loafers. “It took three weeks to get it together. We reinvented the uppers to make them Andrew Marc-esque.”

The footwear initiative was directed by Chris Gbur, the brand creative director of G-III, who has been with Andrew Marc for over three decades. He also spearheaded the sexy ad campaign for the collection, which was shot last week and features scantily clad women wearing the shoes. “Chris went back to what has worked for us in the past,” said McDade.

The shoes will open at $195 and top out at $325 for a boot fully lined in rabbit fur. The shoes are durable yet still look feminine and are “in line with the men’s footwear and the fall apparel,” McDade said.

For fall, the company is augmenting its core black and brown leather outerwear with some colorful alternatives. There are anoraks with pink and blue removable rabbit fur hoods, washed leather jackets with embroidery details and colorful suede jackets. Pins and patches of everything from lipstick cases to taxi cabs are also being offered so customers can personalize their jackets.

This updated product, coupled with a new push into direct selling, is designed to increase sales at Andrew Marc, which will celebrate its 35th anniversary next year.

“Retail is theater today and to excite the customer, you have to change,” said Stephen Budd, Andrew Marc’s president.

Last fall, Andrew Marc tested a new strategy where it supplemented its traditional magazine advertising with three direct mail pieces, he said. These included a 40-page catalogue, as well as two smaller pieces — an eight-page mailer and a postcard — intended to draw customers to the web site to buy some web exclusives. The result was the acquisition of 3,500 new customers, Budd said.

The offering was a mix of the higher-priced Andrew Marc collection as well as Marc New York, the more affordable line. “The big catalog was about telling the brand story,” said McDade, “which is hard to do in traditional print ads.”

Budd added: “It’s a laboratory for us and a way for us to communicate with our customers. When you go direct, you learn a lot.” The company will offer similar web exclusives again this fall beginning at the end of September and will produce four direct mail pieces this time.

Finally, the executives revealed that the brand will launch a men’s activewear collection next year. Called MNY Active, the line will offer business-casual work attire with performance attributes. The Marc New York Performance active assortment for women has been produced for three years and answers the call for ath-leisure apparel at a reasonable price. G-III also produces the Calvin Klein Performance line so the expertise already exists and it makes sense to expand into men’s as well, Budd said.

“You can’t keep doing the same old, same old and cross your fingers,” he said. “Business is challenging in the retail world, so you have to find a way to differentiate yourself.”