It is located a stone’s throw from the new Met Breuer museum, at the ground level of the former Whitney Townhouses.

By Misty White Sidell on May 2, 2016
View Slideshow 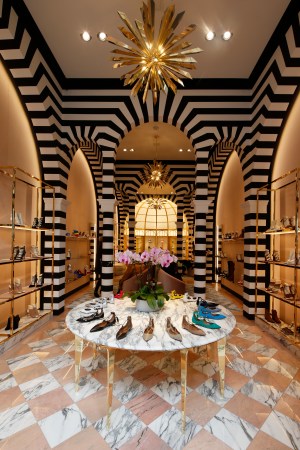 The store is a stone’s throw from the new Met Breuer museum and is at the ground level of the former Whitney Townhouses — a retail development that also counts the new Moynat boutique as a tenant.

For Aquazzura, the store’s opening is strategic, representing the brand’s plans to ramp up its presence in the U.S., a market that accounts for nearly 50 percent of total sales. “New York, I think, is one of the top shopping destinations in the world and for me the American market is so important — it’s our number-one market,” Osorio said.

Aquazzura’s most popular, widely emulated style — its pointed, lace-up Christy flat — will be well represented in the boutique. An assortment of colors and fabrications — including exotics — will be exclusive to the store.

“We normally have at least 20 to 30 percent of our merchandise be exclusive [to each store],” he said.

“Everything looks the same, shopping while traveling became so boring for me, so it’s quite important for us to work with different architects and have different stores and products. I want to make [the stores] personal — each has a soul, a different color palette. It’s like stepping into my New York living room,” Osorio said.

“When we were talking about the store, I was thinking about how I could take all of [Edgardo’s inspirations] and make it ironically feel neutral. That’s where I landed on pink — pink marble, pink suede — softer elements but giving them a harder edge, so this blush, nude color becomes a neutral backdrop by using it in excess,” Korban said of his concept. The suede walls, he said, will be “cleaned with a special brush everyday.”

Aquazzura, founded in Florence in 2011, also operates brick-and-mortar units in Florence and London. A Bal Harbour unit is expected to open in July. Osorio said that he is also investigating retail spaces on the West Coast.

The brand said that it is aiming to double its global business within the next year, although Osorio declined to reveal sales volumes.