The brand is dedicated to increasing its reach in the run specialty arena.

A look from the new campaign.

Running has found a lot of new fans during the pandemic, but Asics has yet to reap the full benefits of the boom. In preliminary results released on Nov. 6, the Japanese activewear brand said it is expecting to report an operating loss of $58.4 million on net sales of $3.1 billion for the fiscal year.

Nevertheless, its new president of North America has high hopes for the brand’s rebound as it releases today a marketing campaign tied to its running roots. The brand was founded in 1949 and its name means a “Sound Mind in a Sound Body” in Latin.

In one of his first interviews, Richard Sullivan, who took over the post of president and chief operating officer of Asics North America in October, believes that the company’s renewed focus on the running specialty space, along with continued improvement in its digital efforts, will position the brand for growth.

Sullivan is the third person to head the North American division in less than two years. The job had been held by Gene McCarthy, a veteran of Nike and Under Armour, who served as chief executive officer of the division and was replaced in February 2019 by Koichiro Kodama. Sullivan was promoted to the top job in the division last fall when Kodama was elevated to a new global role of managing executive officer for Asics at its headquarters in Kobe, Japan.

Sullivan said that for the past two years Asics has been focusing on running. Before that, the brand had been attempting to lure the sneakerheads and streetwear crowd with partnerships such as that with DJ/record producer and fashion designer Steve Aoki. But that strategy was shifted in early 2019 as the brand marked its 70th year in business.

Sullivan said, “Consistency is good in this case. We’re not changing our focus or strategy.”

He said that despite the upheaval caused by the pandemic, Asics North America has seen its third quarter of double-digit sales increases online. Its stores, however, have not fared as well. In fact, the company said last week that it has shuttered its New York City flagship on Fifth Avenue, three years after it opened.

In a statement, the company said: “As Asics looks to evolve its retail and omnichannel strategy, the brand has made the strategic decision to permanently close its Fifth Avenue store in New York City.  The store opened in 2017 and successfully drew in international visitors. With a significant shift in consumer behavior to digital, the brand has decided that it will not re-open the store.” It added that the closure of the store will have no impact on the results for the fiscal year ending Dec. 31, 2020.

Sullivan said Asics’ stores in the Meatpacking District and in California will remain open, but the focus will be on more of an “omnichannel approach.

“The consumer has changed rapidly in the last six to nine months,” he said, leading the brand to evaluate how best to communicate with customers in this new world.

What’s clear, he said, is that communication will center around the true running space. “We’re going to tell our story through our run specialty accounts and through digital means,” he said. In addition, in-person events have been converted to virtual, such as the inaugural Asics World Ekiden 2020 event in December that drew 56,007 participants from 13,602 teams across over 179 countries. The company’s Race Roster and the Asics Runkeeper apps have also been successful in connecting the brand with its customers.

Going forward, he said there will be several footwear launches, including new versions of the Nimbus and the Kayano, along with a new racing flat, the prototype of which was worn by Sara Hall at the 2020 London Marathon, which will be introduced in March.

Sullivan said Asics ranks around third in running shoe brands in the run specialty channel, and his goal is to be on top by 2025.

“We’re very bullish about the future despite all the uncertainties of 2020,” Sullivan said. “We’re proven the brand is resilient and in demand and we hope to carry that momentum through 2021.”

To further connect with its consumers, Asics today is launching a study that will use biometric technology to research the impact of sports on mental health. Overseen by Dr. Brendon Stubbs, an exercise and mental health researcher at King’s College London, the study measured a series of brain pathways known to influence the emotional and cognitive elements of mental well-being. It found that after a short amount of physical activity, everyday athletes experienced an emotional uplift, including up to a 29 percent improvement in their ability to cope with stress and up to an 18 percent increase in their relaxation levels. They also reported a significant drop in negative emotions such as frustration and were up to 28 percent less prone to making rash decisions and react negatively to challenges or disruption. In addition, the participants experienced a 26 percent increase in brain processing speed, up to a 21 percent improvement in memory and as much as a 58 percent reduction in their levels of cognitive stress, or anxiety, forgetfulness and disorganization.

Interestingly, the uplifts in emotion and cognition were actually greater among everyday athletes than elites, the study found.

As the study rolls out, Asics hopes to use the findings to “develop future innovations that unlock the mental benefits of sport and exercise for athletes of all levels,” the company said.

“Sound Mind in a Sound Body is not a tag line for us,” Sullivan aid. “It’s literally our name. And we haven’t really spoken about it to our consumers and customers, but with all the challenges the world is going through, it couldn’t be more relevant.” 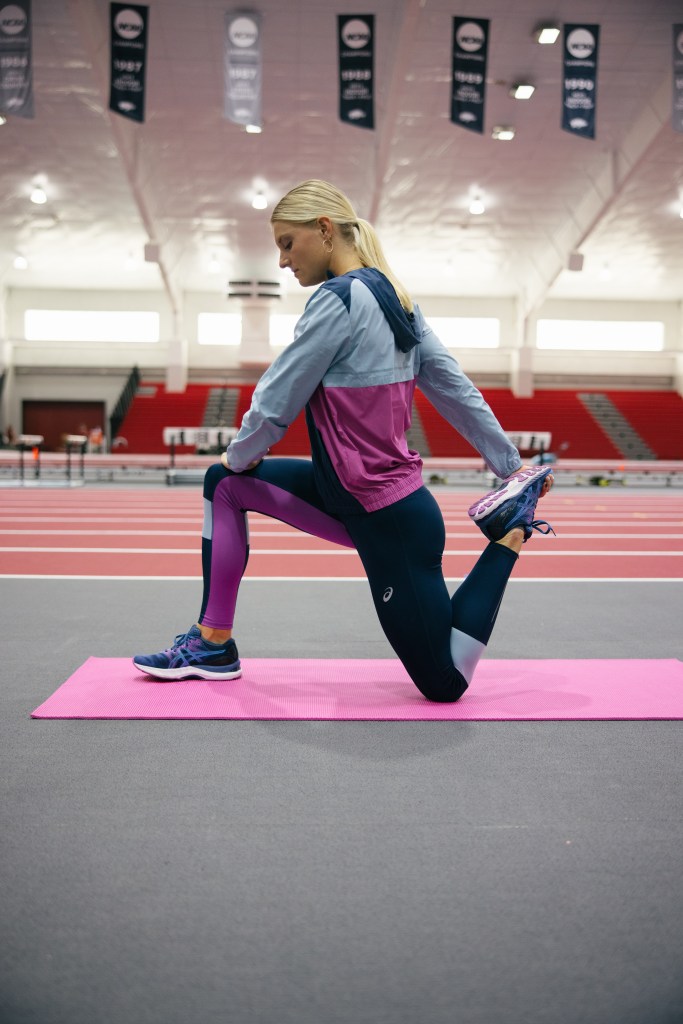 The campaign will launch today on the brand’s social media sites.

To kick off the campaign, starting today, its elite athletes including Hall, Deena Kastor and Taliyah Brooks will issue an open invitation to people to start moving at sunrise by running, walking or taking part in any sport or activity. They’re encouraging followers to upload selfies to Instagram, Facebook or Twitter and to tag Asics or #SoundMindSoundBody.

“It is impossible to overstate just how significant the impact sport and exercise have on our mind,” said Stubbs. “It’s absolutely vital that people regularly move their body to experience those all-important cognitive and emotional benefits for themselves. Never has there been a more important time to become active and experience the mental health benefits sport and movement bring.”

“We know the COVID-19 pandemic has put even more pressure on the wellbeing of millions of people,” said Yasuhito Hirota, president and chief operating officer of Asics. “We also know and believe that sport and movement can lift spirits and help people feel better. For us, 2021 is about unlocking the unique power of sport to uplift our minds. That starts with encouraging people everywhere to move with us at sunrise and will continue throughout the year as we demonstrate our commitments to our founding philosophy of a sound mind, sound body.”