B Brian Atwood Stepping Out 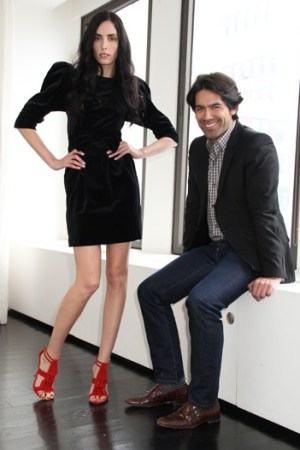 Air Mail Teams Up With Stubbs and Wootton

Six months after signing a licensing deal with The Jones Group Inc., Brian Atwood is ready to launch his diffusion footwear collection, B Brian Atwood.

Atwood said of the collection’s look, “I would definitely say there’s three kinds of aesthetics melted together: Upper East Side poshness, mixed with downtown cool, along with a Parisian sophistication.”

B Brian Atwood is priced at a lower price point (from $200 to $600) with the aim of introducing the Brian Atwood brand to a wider audience.

“This is definitely for a younger, broader market. I think that person is really hungry for fashion…but it could also be some of the same people who are buying the main line, with a different use for it,” the designer said.

This expanded consumer group was precisely what Richard Dickson, Jones’ president and chief executive officer of branded businesses, hoped to reach by signing the B Brian Atwood license in August. Dickson said, “Brian Atwood has added an infusion of energy and excitement to the Jones Group. I am confident the introduction of B will be a success and our intention now is building Brian into an important part of our portfolio for the future.”

Atwood began his own collection in 2001 while chief accessories designer at Versace. In 2004, he left Versace to devote his energies entirely to his own line. His fledgling brand received a considerable publicity bump thanks to a dedicated celebrity following.

“It was huge, especially in a society that’s so celebrity driven, it’s hugely important,” he said. “I do think people took notice, possibly quicker, when it’s on Kate Hudson, Victoria Beckham, all these people. It definitely gave it recognition.”

Atwood said of his recent work with Jones: “There’s definitely more on your plate, which is also very exciting. There are so many endless possibilities to do with the B line and expanding it.”

But after working for himself for 10 years, there were a few challenges with respect to new manufacturers and time lines.

“I’m used to working in Europe where they can make it like that [he snaps his fingers],” he explained. “I think that, with the lead time, and if there are any last-minute changes, you’re not really sure if they’re going to arrive.…But Jones, they don’t waste time, they’re really quick at moving on with whatever it is.”

B Brian Atwood will be available in stores such as Saks Fifth Avenue, Nordstrom and Barneys Co-op, as well as on ShopBop.com, beginning in mid-August.

“We are being very careful on where it’s placed,” he said. “And we want it in this market, we want it to sell out, we want people to kind of figure out where to get it.”

With his first licensed shoe collection behind him, Atwood already has begun thinking of expansion.

“We’ve spoken about jewelry, handbags, ready-to-wear, but we won’t do that until we do it with the main line,” he added. “We started in shoes and it’s been a great experience so far.”