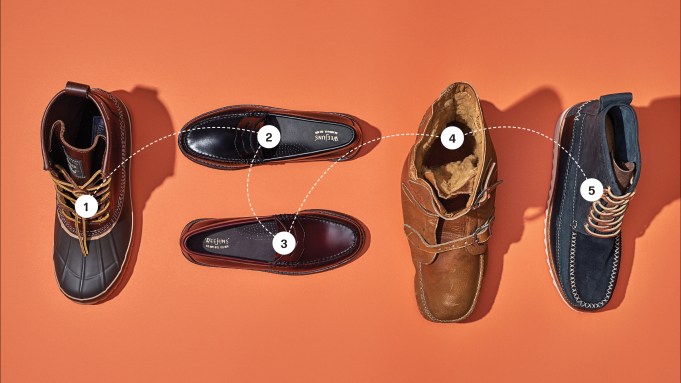 Jeff Goldfarb had no idea what a treasure trove he would uncover after his company, G-III Apparel Group Ltd., bought the G.H. Bass brand from PVH Corp. for $50 million in the fall of 2013.

Sure, he knew that the brand was founded by George Henry Bass in Maine in 1876, but Goldfarb, a self-professed history buff, couldn’t wait to delve into the archives to see what else he might find.

“When we bought Bass,” said Goldfarb, G-III’s director of strategic planning, “we knew it was a great American heritage brand with a rich archive and an amazing narrative that had played its part throughout American history.”

Calling it a “true American original,” Goldfarb eagerly passed along a 93-page typewritten “vignetted history” of the brand written by Maine historian William David Barry. The document speaks to the beginnings of George Henry Bass’ boot and shoe factory that he opened in Wilton, Maine, in a 40-foot-by-20-foot building with eight employees and $2,384 in cash.

Goldfarb seized on the company’s motto — “to make the best possible shoe for the purpose for which it will be used” — and set out to strategize a re-branding and growth plan for Bass’ 140th year to expand its reach in the U.S. and overseas.

“We believe its potential is huge and it can be a $1 billion brand,” he said. Sales are approaching $400 million.

When G-III bought Bass, it was primarily a retailer, operating more than 150 outlet stores throughout the U.S. It was also heavily skewed to footwear, led by its signature Weejuns penny loafer that was invented in 1936 and is celebrating its own anniversary this year. There was also a robust men’s sportswear collection produced under license with PVH that is sold at Macy’s and other retailers as well as in Bass outlets.

Overland in the U.K. is licensed to distribute footwear in Europe. In March, G-III licensed Genesco to design, distribute and market G.H. Bass men’s, women’s and children’s footwear in the U.S. and Canada. Coming for fall is men’s tailored clothing that will be produced by Marcraft Apparel Group. “We’ve put together world-class licensees,” Goldfarb said.

In its 2016 brand guide, G-III gives more than a nod to Bass’ history as a brand “whose very existence relied on being able to survive the outdoors,” but homes in on its future rather than its past.

“Our focus is now on purpose, enjoyment, escape, revival and the form and function that go into that,” the guide says. G-III’s goals are to build a lifestyle brand with a strong presence in footwear and apparel and develop the label into a “modern outdoors icon, able to operate comfortably across a broad range of price points, including accessible luxury/premium pricing.”

The first step will come this week when Bass hits the floor at the Outdoor Retailer show in Salt Lake City with its new Hard Service workwear collection. The line of boots, heavy outerwear and accessories takes its inspiration from the brand’s roots when it outfitted river drivers, guides and sportsmen, and includes canvas field jackets and heavy-duty apparel. It will launch for fall and takes aim at Carhartt and other brands targeted at the outdoor market. It is earmarked for retailers such as REI and Bass Pro Shops.

Although Hard Service will be the primary focus of the show, Bass will also bring along its sportswear, footwear and accessories, including some of the technical pieces offered in the sportswear line such as waterproof fleece.

In addition to Hard Service, Bass’ product architecture is broken down into three other subsets: Outdoors, Ivy and Wilton.

The Outdoors line offers apparel and footwear targeted to the nature enthusiast and is the collection sold at department stores. It also encompasses women’s sportswear, which is being produced in-house and launched for fall 2015.

For men’s and women’s sportswear, Macy’s is a key customer. The men’s wear is carried in 400 Macy’s stores and there are 100 shops for women’s. The Bass collection hangs near Denim & Supply and Tommy Hilfiger in the women’s department and Lacoste and Barbour in men’s.

The Ivy line centers around Weejuns and is aimed at “contemporary prepsters” who are professional and educated.

The Wilton footwear collection is the more fashion-forward offering of casual and dress shoes for men and women and includes saddle shoes, bucks and oxfords.

“Everybody knows us for the Weejuns,” Goldfarb said, “but this brand has much more breadth. We think we have a reason for more, because we have a real story.”

G-III has been mining that story over the past year, producing an exclusive collection of Weejuns for Mr Porter through the European licensee for fall 2016. This premium product retails for $495, much higher than the standard $110 loafer.

“But we want more,” Goldfarb said. “The Weejun is a great way for us to get a foot in the door, but we’re more than a penny loafer.”

In fact, Goldfarb believes there is a possibility to extend the Weejuns franchise beyond shoes and revealed that the company is working on a capsule collection of upscale outerwear, bags and accessories for fall 2016.

Other key products for Bass include its version of the Duck Boot, a product that another Maine brand, L.L. Bean, introduced in 1912. The demand for the style is so high that Bean is chronically sold out of its version, and Bass is experiencing similar popularity for the boot that it started producing in 1924. “It’s one of our core products,” Goldfarb said.

Digital is also seen as a growth vehicle for the company, which launched a Web site in November. “That’s where the customer is shopping today,” Goldfarb said. “And the Web site allows us to tell the story online. So that’s where we’re spending a lot of our marketing money, on e-commerce and unique content.”

The site was centered around sale product, but the revamp offers customers the opportunity to explore the legacy of the Bass product. The site offers a history of the Weejuns; contemporary and vintage photos — including one of President John F. Kennedy wearing a pair on a boating expedition — and even references Michael Jackson wearing the loafer for his famous moonwalk during a TV performance of “Billie Jean.”

The site also offers the company’s new Made in the USA product, a capsule collection of footwear that Bass manufactures in a plant in Lewiston, which retails for $375 for Weejuns, $385 for oxfords and $425 for lace-up boots.

Going forward, the Web site will become more robust, partnering with well-known photographers and tastemakers to elevate its content, and adding Weejuns apparel and the Hard Service workwear line.

Today, Bass operates 160 outlets but Goldfarb sees opportunity to expand its full-price apparel and footwear offerings, which are about equal in size to the retail business. “Growth in both can be huge,” he said.

Andy Gilbert, president of Genesco Licensed Brands, the footwear licensee, also pointed to Bass’ rich history as a strength of the business.

“We love Bass for a number of reasons,” he said, “but mainly because it’s an authentic American heritage brand with roots in footwear.”

Gilbert said before the first Genesco-manufactured product hits stores this month, Genesco moved to clean up the line’s distribution, jettisoning 60 percent of the “big-box and outlet” stores that previously carried the line. The spring collection will be sold at Bloomingdale’s, Nordstrom, Macy’s, Belk and other better department stores, he said. “That’s where the brand should be positioned.”

Gilbert said the most popular items are Weejuns, saddle oxfords and boat shoes — “all Bass classic items.” Most shoes retail for $80 to $100 — “aspirational but accessible.”

“This brand has a great heritage, but there’s a whole new audience of Millennials who don’t know it,” he said.

Gilbert revealed that for fall, Genesco is working with a factory in Dexter, Maine, which will take over manufacturing of the Made in the USA Weejuns and spearhead the production of a new collection. They will be called the Weejuns 207, after the state’s area code, and will be produced in a factory that is being reopened. “It’s a hallmark moment,” he said, adding that many workers from the former footwear plant are rejoining to work on this project. “It shows there are craftsmen in this country who still want to apply their craft,” he said.

The Weejuns 207 will retail for less than $200 and be offered in limited distribution.

Stephen Palmer, chairman and chief executive officer of Overland, which sells in Europe and Southern Africa, said most sales are coming from Weejuns. But the company is also offering boots, welted classics and vulcanized product, all based on authentic Bass styles.

“We are achieving great success in the U.K., France, Italy and Scandinavia,” he said. The shoes are targeted to an 18- to 48-year-old demographic and Overland is working to educate a “younger consumer who may not have heard of the brand. We believe the growth potential is significant.”

Goldfarb said in addition to Europe, G-III is examining expanding into the Far East as well. “We intend to find the best distributors,” he said, noting that companies from Korea, Japan and China have already reached out to the brand. “There’s a lot of momentum and chatter. But we wanted to relaunch here first and find the right partners from strength.”