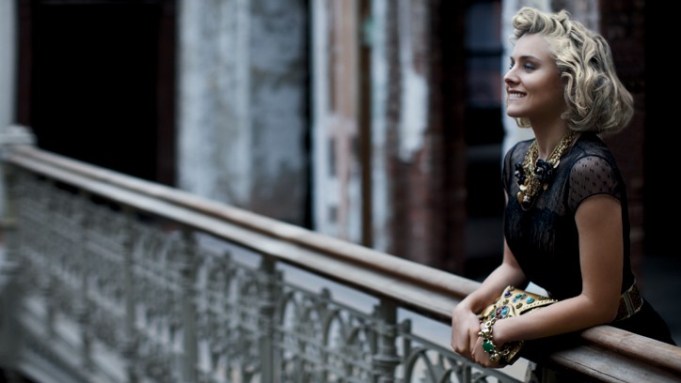 A dingy, touristy pizza joint is perhaps one of the last places you would expect to find a rising Hollywood celebrity like Kristen Bell. Forget the unwashed masses on whose money such establishments rely—aren’t carbohydrates, like, the kryptonite of the red-carpet set?

Apparently not for Bell, who has been frequenting this hole-in-the-wall cafe in Greenwich Village since her days as a musical-theater student at NYU’s Tisch School in the early aughts. Of course, things have changed since then: The Los Angeles–based actress is a movie star, and looks every bit the part. Her blonde hair is pulled back into a chignon, and her small features are obscured by de rigueur oversize sunglasses, which she removes to place her order (one slice of margherita, please). She’s wearing a crisp Prada shirtdress purchased at a consignment shop, which features a bold Venetian-cityscape print—it’s cinched with a braided belt from Goodwill—and Stella McCartney wedges. A bit polished for pizza, true, but Bell, who broke out in 2004 at age 24 as the titular teenage detective in the UPN series Veronica Mars, can’t resist a little theatricality. “I tend to favor things that make me feel like I’m playing a character,” she says, blotting her slice with a napkin. “I gravitate toward vintage styles—equestrian, nautical. I’ve been loving a blue-and-white-striped long-sleeve T-shirt since I was in high school because it makes me feel like Brigitte Bardot sunbathing on the French Riviera.”

Growing up far from du Cap—the Detroit suburbs, to be exact—Bell “always felt a little out of place,” she says. She starred in school musicals, watched Waiting for Guffman on repeat and dreamt of a career in comedy. She was also a late bloomer who didn’t have her first kiss until after her 16th birthday. “I was like the runt of the cool girls [in high school],” she explains

In her choice of roles, Bell has made it a point to stave off monotony. “I was very up-front with [my agents] that, despite how I may appear, it was never my goal to be an ingenue,” she says. “I always wanted to be a character actor. I wanted to be Catherine O’Hara. I wanted to be Kathy Bates and Jennifer Coolidge.” Clearly, genetics got in the way.

Following the cancellation of Veronica Mars in 2007 and a stint on NBC’s Heroes (not to mention an ongoing gig as the omnipresent narrator of Gossip Girl), Bell scored the title role in Forgetting Sarah Marshall, the 2008 raunch-fest from the Judd Apatow crew. Her role as a bitchy TV actress who dumps her schlubby boyfriend for a flamboyant British rocker cemented her reputation as a deft comedic actress, and a bankable one. Plum roles in bubbly studio pics, including 2009’s Couples Retreat and this year’s When in Rome (she met her now-fiancé, comedian Dax Shepard, on the set), ensued, as have high-profile fashion moments, such as this year’s Met Costume Institute gala. Bell arrived in an ombré ruffled Diane von Furstenberg gown—as a guest of the designer. “I like clothes that make me feel feminine as opposed to girly,” she says. “If there’s one too many ruffles or a little too much pink, I will look like I’m going to my own christening.”

For her personal style, Bell knows what she likes and what works for her—but it’s taken some time to get there. “I didn’t grow up with a lot of art or fashion around me,” she says. “I don’t think fashion’s easy—it takes a lot of work.” In the past few years, her stylist-slash-BFF Nicole Chavez has helped her step out of her “clean-cut, all-American-type” comfort zone, pushing her, on occasion, to “get edgy.” (As to whether working on the sartorially driven Gossip Girl has had an influence, Bell says she wears pajamas to record her voice-overs in Los Angeles, and has only visited the New York–based production a few times.) These days, her preferred labels—Prada, Miu Miu, Jenni Kayne and Celine, plus DanniJo and Lizzie Scheck for jewelry—is sophisticated. Plus, as Bell notes, she’s still learning.

Come fall, she’ll continue her sartorial studies on red carpets across the globe promoting two wildly dissimilar films: the family comedy You Again, with Jamie Lee Curtis, Sigourney Weaver and the sizzling Betty White, out September 24, and the darker movie-musical Burlesque, co-starring Christina Aguilera and Cher, which hits theaters November 24. In You Again, Bell plays Marni, an ugly duckling–turned–successful publicist whose brother is set to marry her high school tormenter. Burlesque, on the other hand, has Bell singing, dancing and clad in anatomy-defying costumes as Nikki, the mean lead dancer at a retro girly club. (Of Cher, who plays the club’s proprietress, Bell says, “She is f–king awesome.”)

If the mention of such big names conjures thoughts of behind-the-scenes catfights, or who-is-getting-the-best-lighting dramas, Bell claims her on-set experiences were nothing short of empowering. “I’m playing the role of sponge,” she says, adding: “I worked with all guys for a long time. I wanted some estrogen in my life.” From Cher, for example, she learned “that you can be an otherworldly icon and still have your feet on the ground.” And the 88-year-old White offered tips on keeping things fresh in relationships: “When you hear him coming home, just go change your blouse or put on a little perfume,” Bell recalls White advising, “and constantly celebrate your partner like you did in month two.”

It turns out Bell made quite an impression on her octogenarian co-star, as well. “It was a treat to see this beautiful young girl perform with such terrific comedic skills and professionalism,” says White. “Her career is on fire.”

Bell hopes to flex her acting muscles toward the serious side going forward, including a Broadway show and pursuing “riskier—not in the sense of being dark, but just in the sense of not being as commercial”—independent-film work. But don’t expect the actress to stray too far from comedy. “I’m really happy, when I wake up every morning, that I’m considered.…” She pauses. “It even sounds too cocky to say, because I’m nervous it will be taken away if I say it out loud—but to be considered a female comedian is my dream come true.”