It all started with the dress.

For Lady Gaga’s debut at the Golden Globe Awards last month, her heart was set on a black velvet gown by Atelier Versace that fell off the shoulders and cinched the waist in an ode to Marilyn Monroe. To accentuate the sculptural style with diamonds, she turned to Neil Lane. While the Los Angeles-based jeweler had collaborated with Charlize Theron and Reese Witherspoon for their triumphant turns at the Academy Awards in previous years, he had never worked with the pop star-turned-“American Horror Story” actress before.

Lane sent images back and forth to Gaga’s stylist, Brandon Maxwell, piled 34 square-cut diamonds on a pair of matching bracelets and dropped tear-shaped stones under 10-carat cushion-cut earrings. What clinched the deal was a set of midcentury cuffs, which, enhanced by ruffles and multiple tiers of diamonds, glimmered when she held up her golden trophy later that night. A total of 210 carats dazzled from her earlobes and wrists, adding up to a price of almost $4 million.

“Collaborating with her was really fun,” says Lane, who also provided opals, sapphires and other sparklers to Kate Winslet, Amy Adams, Gina Rodriguez, Maggie Gyllenhaal, Lily Tomlin, Rosie Huntington-Whiteley, Amber Heard and Johnny Depp that night. “It happened to be a very big one for me.”

While much is made about the gowns that glide down the red carpet, the frenzy behind selecting the jewels, shoes and handbags is just as chaotic. The stakes probably run even higher, considering that consumers have a better chance of buying at least some of the accessories than they would a couture dress.

“Our culture is set up in a way today that people look to the red carpet for cues in fashion,” says Greg Kwiat, who is a partner at his family’s namesake jewelry house.

Despite protestations that Millennials don’t watch the Oscars telecast, 18- to 34-year-olds pay attention to the red carpet. “For many of them, it might be their first introduction to brands in that context,” he says. Thus, Kwiat can’t miss the opportunity to get in front of Millennials, especially because “they represent the people coming into the market to buy engagement rings, an important part of what we do at Kwiat.”

The red carpet can be a bargain in terms of marketing. Boutique firms such as Fred Leighton, Kwiat, Neil Lane and Stephen Webster are adamant about not paying people to don their jewelry. Christian Louboutin also toes the line of not paying celebrities to wear his shoes.

Other companies don’t mind whipping out the checkbook. In 2006, Chopard paid Theron $50,000 for wearing at least two pieces to the British Academy of Film and Television Arts Awards and $200,000 for wearing other gems to the Oscars.

Still, the press exposure is invaluable. Glossy magazines, Web sites and TV shows dissect each look. Social media amplifies the message through the stylists’ own accounts and the celebrities’ personal feeds.

Relationships between jewelers, stylists and actresses are carefully cultivated for years, and concessions are often considered. For instance, Jennifer Jason Leigh, who’s nominated for her supporting role in “The Hateful Eight,” never pierced her ears. Her stylist, Maryam Malakpour, who happens to be friends with Stephen Webster and his special projects director, Julie Van Daele, requested bold cocktail rings. That’s how, to add a flash of danger to her black-and-white dress by Roland Mouret at the Critics’ Choice Awards, Leigh ended up wrapping two fingers in Webster’s rose gold ring that resembled a black-and-white diamond snake squeezing a white chalcedony lotus flower in its tail.

The appearances on their Oscars campaigns allows actresses to change their looks. Saoirse Ronan chose Forevermark’s white gold and diamond earrings shaped like wings for the Screen Actors Guild Awards, Stephen Webster’s Art Deco-style pink opal earrings for the Critics’ Choice Awards and David Webb’s pagoda earrings stacked with jade, turquoise, diamonds and white enamel for the Museum of Modern Art’s screening of “Brooklyn,” for which she earned a best actress nomination.

Unlike gowns and baubles, shoes can go on heavy rotation, especially if they prove comfortable enough to last the eight-week slog between the Palm Springs International Film Festival and the Academy Awards. Rachel McAdams, who’s nominated as best supporting actress in “Spotlight,” slipped on black suede platform sandals with an open toe by Brian Atwood for the SAG Awards and turned to them again a week later for the Directors Guild of America Awards.

Especially with footwear, the red carpet can level the playing field for young designers. Olga Djanguirov saw Eva Longoria and Laura Prepon preen at the SAG Awards in stilettos from her two-year-old line called Olgana Paris. Kirsten Dunst’s styling team, Nina and Clare Hallworth, loved the powder pink sandals decorated with handcrafted leather rosettes so much that they shelled out more than $1,500 at Maxfield’s for them. As men move the meter for fashion experimentation, accessories brands are ready to cater to them with tuxedo shirt studs, cuff links, lapel pins and watches. At the Golden Globes, Christian Louboutin shod the feet of David Oyelowo in smoking slippers, and Matt Damon stood tall in the designer’s slender oxfords when he accepted the award for his leading role in “The Martian.”

Moreover, an Oscar winner can serve as a muse. Ever since Rebecca Selva, chief creative officer of Fred Leighton, received a phone call in 1998 from Miuccia Prada to send opal jewelry that could complement a light blue Empire-waist dress for Nicole Kidman, Leighton has been accessorizing Catherine Zeta-Jones, Meryl Streep, Patricia Arquette, Common and other thespians on their winning nights. In 2014, for Lupita Nyong’o’s appearance to accept the prize for her supporting role in “12 Years a Slave,” Selva designed earrings featuring a row of pear-shaped diamonds that dangled like fringe. “We loved them so much that we created other pieces in the collection that were inspired by that,” she recalls. “We launched the collection a year later.”

Other jewelry houses can’t resist the temptation to use the red carpet as a launch pad.

Kwiat introduced its Star collection with the help of Halle Berry, who wore the diamond earrings to the “Die Another Day” movie premiere in 2002. “It became a classic, and our best-selling collection of all time,” Greg Kwiat says. Last month, at the People’s Choice Awards, Claire Danes was the first to wear a $14,900 bangle hand-plotted with 523 diamonds from Kwiat’s Tempo collection. Not available at stores until late June, the bangle already has spurred three inquiries from shoppers and some calls from Kwiat’s retailers wanting to know when they’d be able to stock the piece. “Even when you’re talking to the retail partners,” Kwiat says, “they like what is happening in that [red carpet] context as well.”

Tiffany & Co. previews its famous Tiffany Blue Book to Tinseltown denizens for the Academy Awards red carpet well before its regular clients see it in April. Besides adorning Cate Blanchett and Brie Larson in diamonds and emeralds at various events, the jeweler also dispatched CT60 watches to Liev Schreiber and Oscar Isaac for the Golden Globes.

When it comes to blanketing the red carpet with a high quantity of celebrities or cherry-picking marquee names to represent their brand, Catherine Lacaze, vice president of marketing for North America at Tiffany, shares an opinion held by many houses: “Definitely quality,” she says. “It is incredibly exciting to see an image of an award-winning actress wearing Tiffany jewelry circulate around the globe.”

Indeed, Selva adds, “There’s no question that the Oscars is the greatest fashion show.” 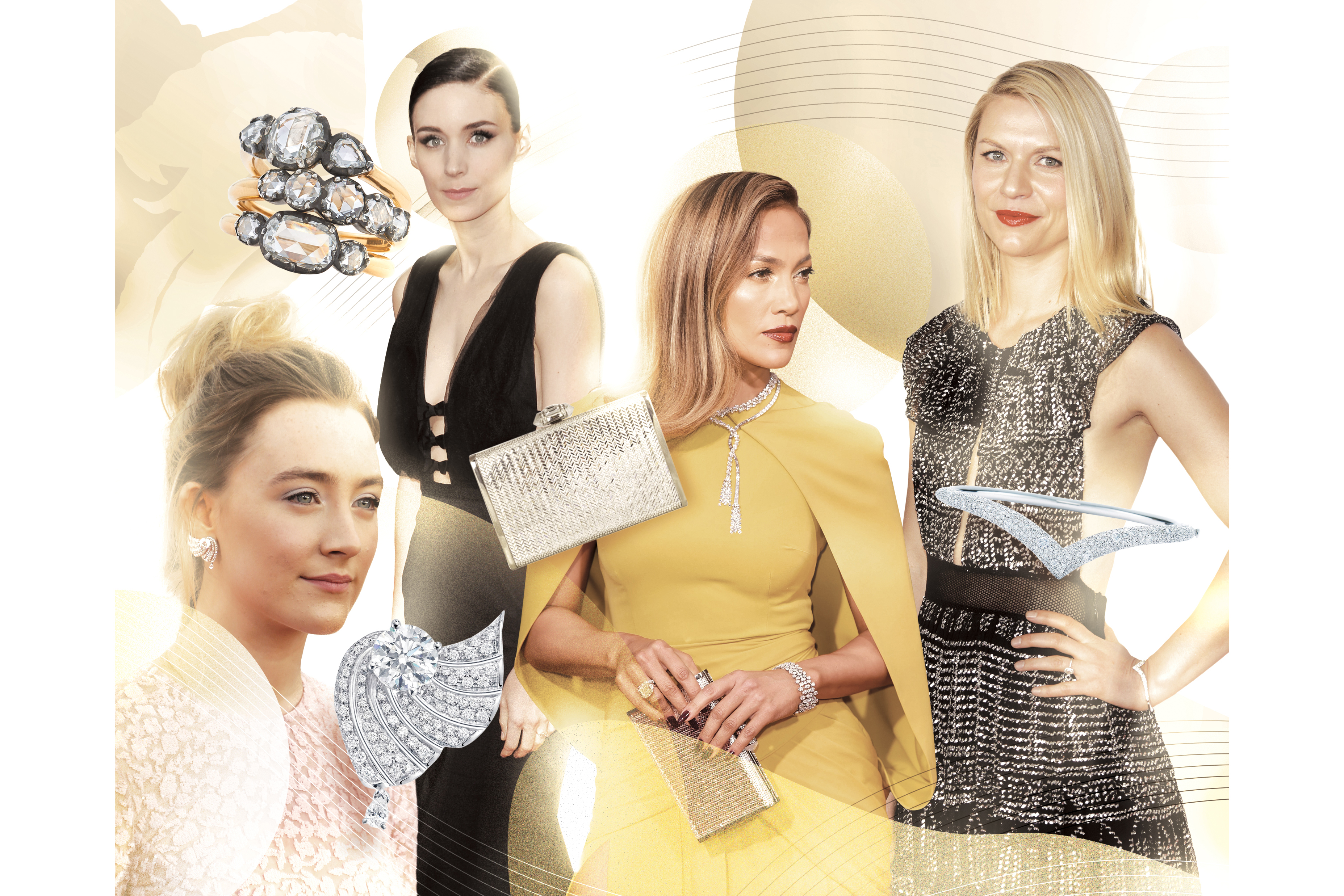 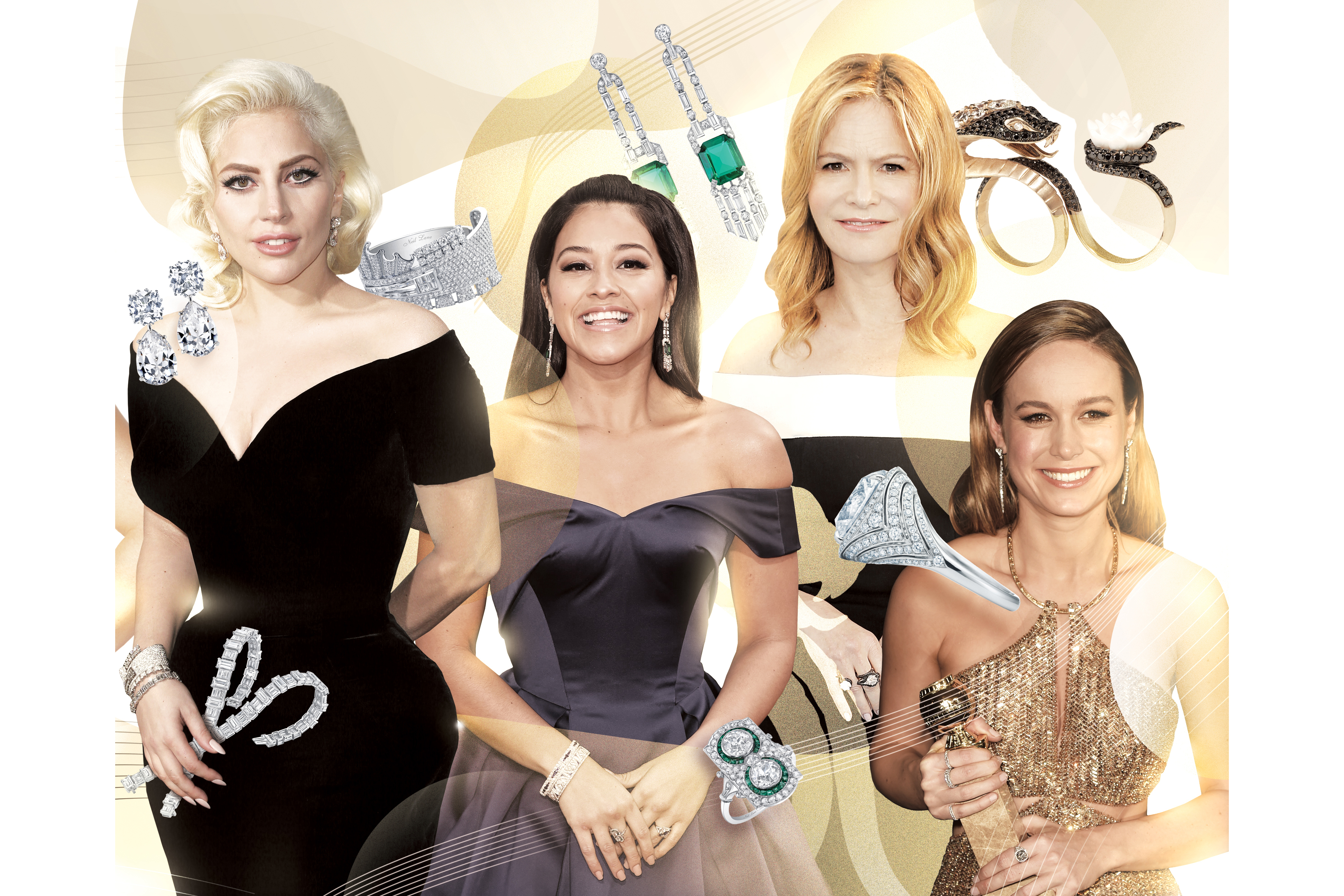 8. For the Golden Globes, Neil Lane outfitted Lady Gaga with square-cut diamond bracelets and midcentury cuffs with ruffles. She also wore a pair of 60-carat diamond earrings.
9. Among other jewelry from Neil Lane, Gina Rodriguez wore an emerald and diamond ring and matching fringe chandelier earrings at the Golden Globes.
10. Jennifer Jason Leigh wrapped her fingers in a double ring resembling a snake squeezing a lotus flower by Stephen Webster for the Critics’ Choice Awards.
11. Brie Larson wore an $800,000 platinum ring, anchored by a 6.43-carat diamond, from Tiffany & Co. to the Golden Globes.