The German brand has accused its Japanese distributor of copying its footwear, down to the last stitch.

Image of Birkenstock and Hawkins shoes

MILAN — Birkenstock is severing ties with its Japanese distributor ABC-Mart Japan, accusing the firm of copying its famous sandal designs down to the last stitch, according to a memo seen by WWD.

Birkenstock said it has notified ABC-Mart Japan and ABC-Mart Taiwan, telling them it will no longer accept any more orders, with immediate effect, the internal memo said.

The German company accuses ABC-Mart of selling shoes under its own brand name Hawkins, “which in our view adopts designs identical — or confusingly similar — to our shoes,” the memo said.

It accused ABC-Mart of inappropriately using the Birkenstock name and reputation “to entice customers to purchase Hawkins shoes” by displaying them alongside genuine Birkenstock goods in its retail stores. 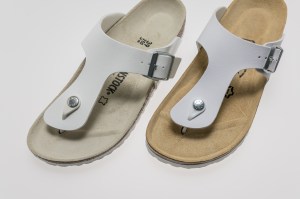 Image of Birkenstock and Hawkins shoes.

“We feel that such conduct is harmful to our well-established brand, and we also informed ABC-Mart that Birkenstock reserves all rights to take any legal action,” the company said.

Neither Birkenstock nor ABC-Japan could be reached for comment at press time.

The memo indicated that Birkenstock had flagged the issue to ABC-Japan multiple times over the years, to no avail.

“Unfortunately, ABC-Mart has proved unwillingness to make any concessions or display any interest in cooperating on this matter whatsoever. We have now reached the point where we are forced to take unilateral action to protect our brand and avoid further damage to it,” the memo said.

It is unclear how Birkenstock plans to distribute its goods in the Japanese and Taiwanese markets going forward, and whether lawsuits have already been lodged in those territories. 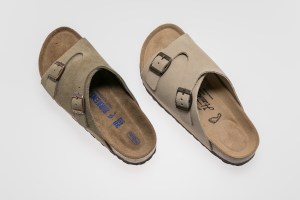 Image of Birkenstock and Hawkins shoes.

The memo, signed by Birkenstock’s chief sales officer Klaus Baumann, urged teams to sit down with the brand’s wholesale and retail partners around the globe, and ask them for their support in fighting all acts that may damage the brand, including any types of counterfeiting and piracy.

“We undertake enormous efforts when it comes to combating any inappropriate exploitation of our brand. Our global IP protection team approaches counterfeiting and piracy from the ground up, and will provide all necessary assistance should the sales team need it,” the memo said.

“We will do whatever is necessary and legally permissible to ensure that any business partner selling our goods does not damage our brand reputation. It is as simple as this. Marketing lookalikes and misleading marketing is clearly at odds with our understanding of a fair partnership.”

This isn’t the first time that Birkenstock has run into trouble with distributors. In 2017, Birkenstock Americas chief executive officer David Kahan cut all ties with Amazon, accusing the site of selling fakes through third-party sellers.

Kahan terminated the direct sale of Birkenstock products, as well as sales from legitimate third parties, from the U.S. site.