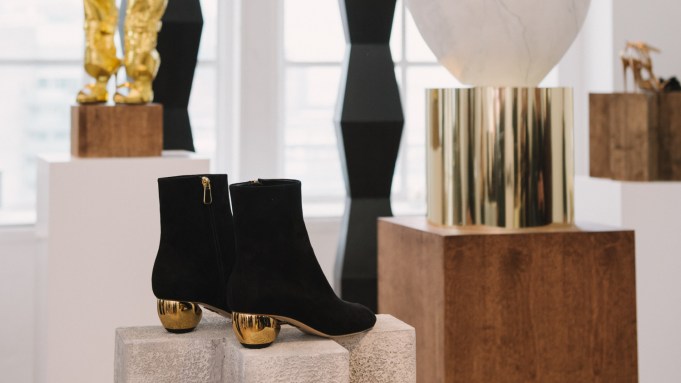 Though the sculptures of Constantin Brâncuși are clean, modern and composed of simple lines, the 20th-century Romanian-born artist’s work was actually quite complex in its creation. The same could be said of Paul Andrew’s shoe designs.

The designer was inspired after he happened upon the Paris-based artist’s atelier, still left intact, after catching an exhibition at the Centre Pompidou. But the influence goes beyond the style of the artwork. The artist was relentless in perfecting his shapes before casting in brass, a process similar to what Andrew uses when creating shoe molds. “I love those two parallels and the connection to his work and the process of shoemaking,” Andrew said.

He also referenced key materials favored by Brâncuși — African wood, brass and marble — in the shoes. To make the point clear, Andrew displayed his shoes on tiered sculpture pedestals created from wood, brass, marble and cement.
The most dramatic shoe, which Andrew called an ode to the artist, was a “half-d’orsay,” an asymmetric pump with toe-cleavage vamp in metallic mirror leather with the new “Maiastra” heel, named after a famous Brâncuși sculpture. The heel was cast in brass, yet overall, the shoe had a golden effect. If the Oscar statuette were a shoe, this would be it.
Andrew also built upon the Carrera marble mood created in pre-fall, expanding the theme to include contrasting marble patterns in classic white on the uppers and a black nero portoro heel and inner shoe lining, for instance. A group of rich, triple-dyed suede pointy-toe mules came in flat and stiletto heights, and has all the markings of a future house classic. Another highlight was a simple bronze sandal with hand-applied black feathers across the toe — which referenced the “pigeon problem” in the open-air section of Brâncuși’s studio.

Besides his own collection, Andrew is about to present his first shoe collection for Salvatore Ferragamo, where he was named design director for footwear. Juggling the responsibilities of two brands can be a challenge, but Andrew seems to be handling it deftly thus far. “I’ve been designing shoes for 18 years and even when I worked for Donna [Karan] or Calvin [Klein], I was overseeing different categories, so I am quite used to balancing it all,” he said as the presentation was winding down. The event may have been ending, but Andrew is just getting started.