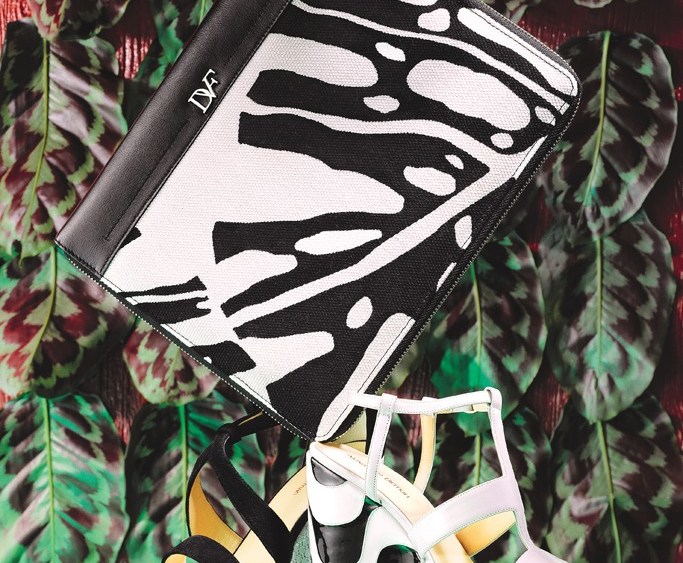 During the Olympics’ Opening Ceremony, Charlotte Olympia shoe designer Charlotte Dellal tweeted a TV screen shot of Team Brazil just as it was entering the stadium. That she is such a fan of the country is no surprise: Her mother, the well-known model Andrea Dellal, is a Rio de Janeiro native, and, as a child, the younger Dellal lived in Brazil’s second-largest city for a few years.

These days, Dellal, now based in London, frequently turns to her “home from home,” as she puts it, for design cues. Case in point, her resort collection. Called “Glamazon,” it includes ankle-strap shoes decorated with metallic swirls that mimic the Copacabana sidewalk, as well as platform sandals flaunting flamboyant heels—mini birdcages encasing painted metal parrots. “It’s such a vast country that you can get inspired from so many different things,” Dellal says. “The people are very inspiring. The music is fantastic, and Carnival is one of my favorite times of the year.”

Dellal is not alone in her love for all things Brazil. If the country is best known for Corcovado, “Girl From Ipanema” (cue the “tall and tan and young and lovely”) and Gisele Bündchen, a different kind of Brazil is now emerging. Fueled by a boom of both the financial and creative kinds, the country is making a real impact on the fashion and accessories worlds at multiple levels—from serving as a leading design and retail inspiration (even Macy’s held a spring promotion called “Brasil: A Magical Journey”) to becoming an emerging market for luxury brands.

“Brazil is enjoying an incredible GDP growth rate,” says Patrizio di Marco, global president and chief executive officer of Gucci, which has plans to open five stores there by the end of the year. “You have a number of high-net-worth individuals—similar to Russia and more than India—which says a lot about how important the market is. I think we’ll have more opportunities there.”

Gucci is among the luxury brands with outposts in the new JK Iguatemi mall in São Paulo, which opened in July; it unveiled a dedicated men’s store there, while the brand has two more stores offering men’s and women’s product in São Paulo, as well as one in Brasilia, with a Rio opening slated for later this year. Other brands at the JK Iguatemi include Van Cleef & Arpels, Lanvin, Miu Miu, Bulgari, Prada and Chanel.

Robert Burke, of consultancy Robert Burke & Associates, cites the explosion of creativity as a significant reason why the industry is taking notice. “Brazil represents a lot of sophistication, which people had underestimated in the U.S. before,” he says. “What fundamentally changed there is that it was a country dominated by local brands because of trade tariffs, but with Brazil’s economy, the number of ultrarich has grown. They travel internationally, and their appetite for international brands also grew—and so has their ability to buy these brands locally.”

Just as international labels are hitting cities like Rio and São Paulo, Brazilian fashion brands, including Melissa, Schutz and Jack Vartanian, are making inroads in the U.S. São Paulo-based shoe designer Alexandre Birman, whose family owns Arezzo & Co., one of Brazil’s leading women’s shoe companies (as well as the Schutz division), isn’t surprised by the new momentum. “Brazil was the first country to really get out of the financial crisis of 2008,” Birman says. “Our recovery was the fastest in the world, and that drove the attention of many investors to Brazil, who, consequently, brought money here, allowing [local] companies to gain in scale and to have the possibility to invest more overseas.”

Birman notes that Southern Brazil’s Vale dos Sinos region is the third-largest shoe-manufacturing area in the world, with a cluster of 20 cities that boast such centers, from tanneries to sole producers. “It was an area colonized by Italians and Germans and their families after the war, and they brought a lot of people that knew about shoe manufacturing to the area,” he says.

Shoemaking aside, Birman cites three other main reasons why Brazil is having such a moment: the contemporary art scene, which is thriving with artists like Adriana Varejão, Beatriz Milhazes and Vik Muniz; the 2014 FIFA World Cup to be held across multiple Brazilian cities, and the 2016 Summer Olympics in Rio.

“Brazil is a buzzword and buzz place,” says designer Monica Botkier, whose resort lineup was inspired by the idea of chic, exotic travel, and, naturally, Brazil. “There was always the notion of Brazil. Now the country is catching up to its own reputation,” she says.

Judith Leiber’s creative director, Jana Matheson, also looked to the country for resort, most notably with her minaudières, some in the shapes of parrots and frogs, and others crystal-embellished to resemble palm trees. “We design holiday and resort in the middle of winter, and as I was working on the collection, I thought, If I were to go out of town, where would I go?” says Matheson. “If I were to hit a beach, I thought I’d be very happy to be in Brazil, and so I thought about hardware development and beach glass in these watery liquid tones.”

Rafé designer Rafé Totengco, meanwhile, was dreaming of a trip to the Copacabana. His structured mother-of-pearl, resin and stainless-steel minaudières loosely reference the designs of Brazilian architect Oscar Niemeyer, while totes are worked in vibrant graphic motifs. “It’s this celebration of color, more than anything else,” Totengco says. And, he adds, who can’t use a little Brazil in their lives? “The girls from Ipanema, the boys on the beach, the Fasano [design hotel chain]…how could you not want to be there?” Totengco says. “It’s got rhythm.”