Ugg is introducing a fresh take on its classic boot with a limited-edition collection, dubbed &quot;Classic Luxe,&quot;with Carolyn Murphy as its face. 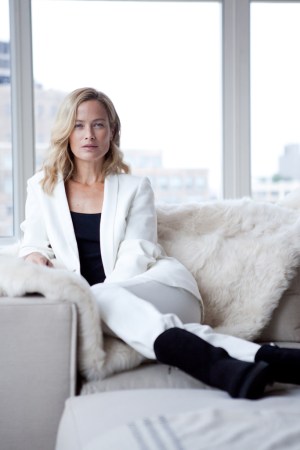 Ugg is getting a new look — and a familiar face to go with it.

For the first time in 37 years, the company is introducing a fresh take on its classic boot with a limited-edition collection, dubbed “Classic Luxe,” and Carolyn Murphy as its face.

Herself a California native, where the Deckers Brands-owned company was founded in 1978, Murphy is no stranger to its products. “I grew up with the brand, having lived in California for 10 years and surfing there, so we were given Ugg boots quite young,” she said. “My first pair was from my uncle when I was maybe eight, and they were the classic sandy-colored boots. My cousin and I both got a pair of my grandfather’s when he passed, which I know is a bit weird.”

The new collection is a far cry from those old styles, though. The Italian-made boots feature a sleeker silhouette with a slimmer, more-contoured construction than the classic iteration. Materials include goat suede and Merino Twinface, with a leather, logo-embossed heel and the signature sheepskin insole. The collection comes in two styles: the Abree, a sister to the traditional boot with a new zipper closure for a snugger fit, and the Karisa, an ankle boot done with tasseled fringe detailing. The Abree, which comes in tall and short heights and will retail for $295 and $250, respectively, comes in colors that include espresso, aubergine and rust, while the Karisa comes in tan and black and retails for $245. The collection will hit select North American Ugg stores, and the brand’s Web site, beginning on Aug. 6.

Murphy praised the new collection’s more refined style. “The great thing about this collection is that it will appeal to a huge age range, no matter what their lifestyle.” Case in point: her 14-year-old daughter Dylan has already borrowed the pair that Murphy took from the set.

She described the campaign shoot as “comfortable” — a trait evident by the images, which depict the model lounging barefaced in oversize sweaters and cozy jackets. Coincidentally, her other high-profile gig for fall — the Oscar de la Renta ready-to-wear campaign — also called for the au naturel look. “Maybe that’s what happens when you are fortysomething — they say you don’t need makeup,” she said.

Though she was discovered at the age of 15, Murphy is hesitant to let her daughter enter the modeling realm just yet. “She’s been approached a lot lately,” she said. “I told a magazine recently that I just don’t think she’s there, maturity-wise, so maybe come back to us in a few years.

“My daughter is 14, and Kate [Moss] started when she was 14, and then Amber [Valletta] and Shalom [Harlow]. My parents were stricter — I had to wait until I finished high school, and then I had to attempt college, which I did for a year. On a personal note, I would stave it off as long as I could for Dylan. That being said, if [Steven] Meisel called tomorrow and said he wanted to do a portrait of her, I don’t think I would say no, because I’m very close with him, and there’s a certain level of trust there.”

Murphy notes an added pressure for younger models these days, particularly in the age of Twitter and Instagram. “I get in trouble for not being that active [on social media],” she admitted. “I do not have a lot of followers.”

The model has 122,000 followers on Instagram — not too shabby, but a far cry from the count of models du jour such as Karlie Kloss (2.9 million), Joan Smalls (1 million) or the reigning queen, Kendall Jenner (33 million), the latter two who also happen to share Murphy’s title as an Estée Lauder spokesmodel. “I find it painstaking at times to self-promote,” Murphy said. “It’s so different from the Nineties when it was very much about art and fashion and music and there was a real passion. Now it’s quite corporate, which is fine because at the end of the day we’re all creating and selling products — that’s our job. The self-promotion is what I have a problem with.”

So no selfies? “I get embarrassed,” she said. “If I post one selfie a week, I’m doing good, because with brands, that’s one of the first things they ask. They want to know how many followers you have. I hear this a lot from the younger models, because it’s really all they know. For those of us who are a little bit older, we have to figure it out.”

To her defense, Murphy has other things to worry about beyond finding the perfect iPhone lighting, including her position as women’s design director for Detroit-based leather goods and watch manufacturer Shinola. “My role at Shinola is something I would have never thought could happen,” she said. “Maybe I would have dreamt of having an actual job and a desk and a salary, which it has evolved into and is wonderful. Having a job where I actually have to think and sit on the creative side of things and have an opinion is really important.”