The store is located on Albemarle Street next to Aquazzura, Alexander Wang and Paul Smith.

By Natalie Theodosi and Julia Neel on November 17, 2016
View Slideshow 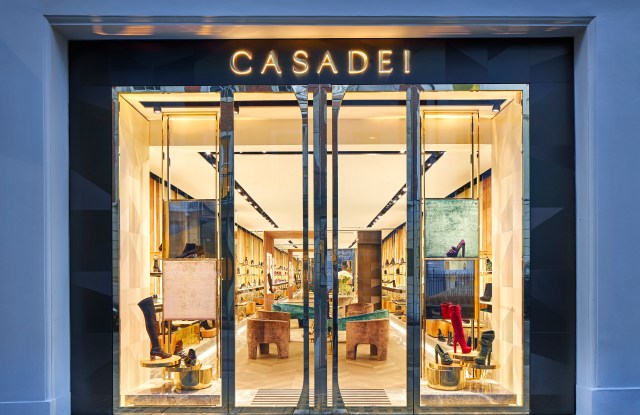 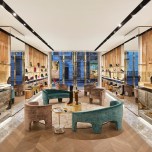 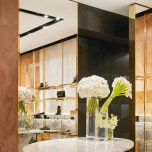 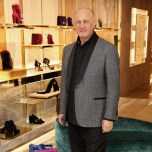 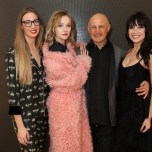 LONDON — Italian footwear label Casadei has opened its first store and largest flagship in London at 48 Albemarle Street in Mayfair — and it’s meant to feel like a home.

“I wanted the space to feel a bit like a living room, because in that environment customers can feel calm and at ease,” said Cesare Casadei, the brand’s owner and creative director, pointing to the cozy velvet seats, silk rugs and the side tables by designer Angelo Mangiarotti.

“I’m the happiest about our London store because it’s a large space and it blends the aesthetics of Milan and Rome together,” said Casadei, who worked with architect Marco Costanzi on the design.

The space is divided into two sections: The main room stocks the brand’s full evening and daywear collections as well as an array of variations on the “Blade” pump, one of the brand’s most recognizable styles, with needle-thin stiletto heels.

The second area, located at the back of the store, has a more intimate feel, and features exclusive pieces from the brand’s range, including intricate, jewel-embellished pumps and a screen projecting the brand’s spring campaign. It is also set to house Casadei’s first jewelry collection, launched earlier this year in partnership with Ilenia Corti, as well as bespoke services.

The store has an aura of opulence, with floors featuring bespoke parquet and peach marble flooring, gold-tinted displays and plush velvet sofas in shades of petroleum and brown. The two areas are connected with a passageway featuring matte brown marble, which creates a contrast with the rest of the store’s shiny surfaces.

The designer said he’s aiming to tap into the city’s international crowd with the Mayfair store opening.

“London is a classic example of a city that houses people from all over the globe. It’s modern, but also has a lot of traditions. That is an idea that’s close to home because, with my work, I always look back at the traditions established by my parents, and at the same time I observe the world today in order to look forward,” added the designer.

He said he was drawn to Albemarle Street because of its eclectic mix of retailers, galleries and restaurants. Some of the brand’s neighbors include Aquazzura, Alexander Wang, Paul Smith and Amanda Wakeley.

“Every major brand has a presence on nearby Bond Street, and I was drawn to Albemarle Street for its refined feeling, it’s still glamorous — but you also get a sense of newness.”

The store will stock the brand’s full collections, as well as a selection of key styles from the new spring Eighties-themed collection, which will be available exclusively in the London store before launching globally next year.

In the next year, the brand is planning openings across Asia and the Middle East as well as a revamp of its web site — spearheaded by Casadei’s daughter Arianna — which has quickly grown to represent five percent of sales and is showing increases on a monthly basis.

On Wednesday, Arianna Casadei joined her father to host London’s well-heeled crowd at a party celebrating the new store’s launch. She was wearing a bee-print For Restless Sleepers pajama suit. “My father doesn’t like my outfit, but I can wear it anyway because I love it. I feel like I’m my own woman now,” said the younger Casadei, the third generation of the footwear dynasty.

During the evening, the footwear designer reminisced about his brand’s long history with London. He said he recalls his parents traveling to London “at the end of the Sixties to see the new fashions on Carnaby Street and the ready-to-wear. The platforms and the chunky heels…It was a revolution compared to other countries — even Italy wasn’t as advanced as London. It is where all the newness in fashion is, and always very open-minded.”

The comely twins were in attendance, wearing Frame denim leather jackets and Casadei heels. Now based in L.A., they said they are planning on returning to Australia.

“We’re going for a month, we have rented a beach house in Stanwell Park in a national park south of Sydney, where we will just hang out with our family. We might do Byron [Bay] for New Years,” Elektra said.

Before that, they will be returning to Los Angeles to put the finishing touches on their new album, due for release next year. “We need to spend two more weeks in the studio but it’s really good. We don’t know what it’s going to be called — we haven’t yet agreed on a title.”