The brand is projecting nearly $50 million in sales for next year, with hopes that a series of complicated silhouettes will help get it there. 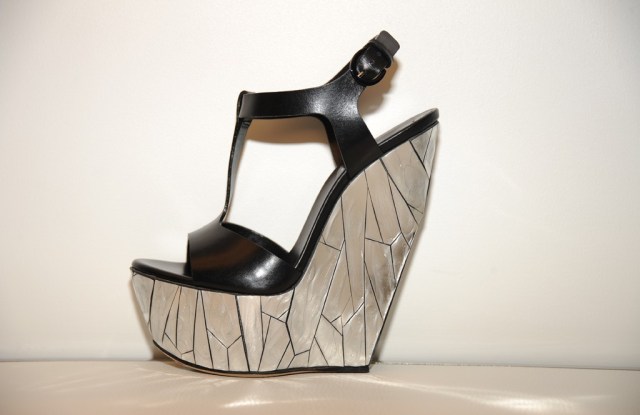 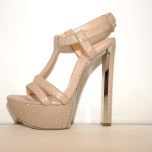 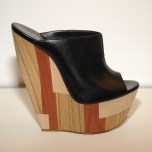 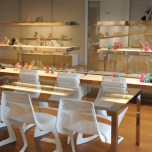 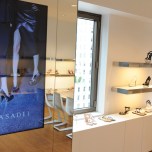 NEW YORK — Casadei is projecting nearly $50 million in sales for next year, with hopes that a series of complicated silhouettes will help get it there.

Every season, three or four technologically advanced constructions are introduced to the lineup, Casadei creative director Cesare Casadei told WWD at the company’s showroom here while in town for New York Fashion Week. The focus was on the wedge this time around, he said, with innovations like a patchwork heel comprised of three colors of wood that were hand cut and assembled or a wedge fashioned from laser-cut plastic treated with heat and a brush to achieve the look of a cracked mirror with a mother-of-pearl effect. An “invisible” Lucite wedge is intended to give the illusion that the shoe has no heel — but the wedge isn’t continuous, with a slither of space between where the heel of the foot meets the top of the heel.

The main reason for Casadei and his wife, muse and right hand in the business Alessandra Casadei’s trip to Manhattan was to attend the Prabal Gurung show on Sept. 8, as the brand collaborated with the designer on the shoes for his spring collection. This was Casadei’s first partnership with an American-based designer, and the brand worked with Gurung on developing two silhouettes — a sandal and a pointed mesh-toe pump, both of which were inspired by Casadei’s popular Blade design. Both styles have an acetate-and-steel wedge with a degrade effect that will come in white, gray, black or red and retail between $900 and $1,000.

Casadei attributes his family-owned company’s success to attention to detail. Revenues grew 20 percent in 2011 and he projects more than $40 million in global sales by yearend. In 2013, Casadei is hopeful that this number will again increase by 20 percent.

From 2011 through December of this year, the brand will have opened a total of 13 freestanding boutiques in places such as Casablanca, Morocco; Cannes, France; the Dubai Mall in Dubai; Rome; Sofia, Bulgaria, and Rostov, Russia in 2011; and in Russian cities Moscow, Saint Petersburg, Yekaterinburg and Kazan from March through September of this year. Currently, the brand maintains 45 doors and plans in 2013 to set up shop in Shanghai, Beijing, Kuwait, Manila and the south of France. The shoes are sold at more than 500 doors worldwide, with 25 of those in the U.S., including Barneys New York and Neiman Marcus.

The biggest market for Casadei remains Italy, and the fastest-growing regions include the Far East and Middle East. The creative director is looking to open a store here on Madison Avenue as soon as possible and to enter Brazil. The digital world is another area the brand wants to tackle, and next year it will see the launch of e-commerce at its digital flagship casadei.com.

The brand introduced a new store concept at its Rome location in 2011, and each shop that’s opened since has implemented a series of mirrored ceilings, black lacquered glass panels covered in white leather and waxed Afromosia wood wall displays. Flagships have tobacco-colored crocodile seating.

A new branding strategy will be executed in tandem with spring 2013 deliveries early next year. The brand’s black-and-white boxes will have a shimmery, pearlized finish and an updated logo, as well as shopping bags to emphasize rebranding efforts on a consumer level.

This will culminate the brand’s four-part expansion plan that kicked off two years ago, Casadei said, which includes the continued opening of additional retail locations, renovating the showrooms in New York and Milan (the latter was completed this summer) and launching an e-commerce enabled Web site early next year.

One of the brand’s best-selling styles remains the Blade, which was introduced into the permanent collection two years ago. Casadei said it was a lengthy process trying to perfect the pointy-toe stiletto (it also comes in a wedge), which has height (115 mm), a thin heel and manages to retain a femininity that sometimes gets lost in the ether of extreme footwear.

“If women can’t walk, then women don’t need it,” said Casadei, echoing the words of his father, Quinto Casadei. The elder Casadei founded the namesake company in 1958 that at one time or another gainfully employed Manolo Blahnik, Christian Louboutin and Giuseppe Zanotti.

Cesare admitted that the first prototype of the Blade — which originally had a plastic heel — broke. That’s when he turned to steel, which he calls the defining material of the shoe. He picked up an ivory leather pump with its sleek metal appendage — set to debut at the brand’s spring 2013 presentation in Milan this week — which looks hardly sturdy enough to hold the weight of an adult female. Casadei gave surety that it does.

All footwear is produced in-house at a factory in Rimini, Italy, about 200 miles south of Venice on the Adriatic Coast, and it’s been this way since the company’s inception 54 years ago. The same woman has been responsible for sample production — by hand — since the late Sixties. The brand also employs four women specifically tasked to embroider and embellish each pair of shoes, when the style calls for it.