By Jocelyn Anderson and Regina Smith-Popp and Katie Abel and Kristen Henning on May 9, 2011
View Slideshow 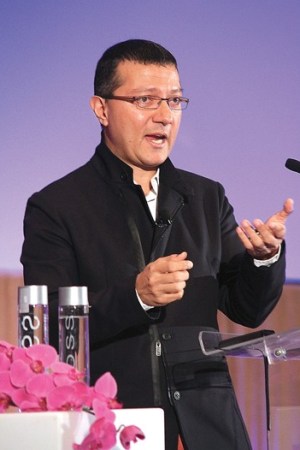 Bernie Sanders’ Style and the Antihype Sneaker: How Saucony Plans to Capitalize

In the fast-moving digital world, only the best ideas prevail. Google, Ideeli, Polyvore, PepsiCo and Shopkick have all captured a piece of the market with strategic business models, from personalized shopping sites and unique flash-sale platforms to interactive social media initiatives.

Below, five digital case studies, as presented at the summit.

Google’s Rules
Dare to be different.

That was Google’s mantra when it designed Boutiques.com, the six-month-old shopping site that lets consumers find and discover product by creating their own personalized boutiques. They can choose the brands and styles they love, and the ones they hate.

“We really set out to do something different, and we wanted to break the mold,” said Gaurav Suri, head of commerce sales for Google’s emerging businesses. “We knew that what worked for hard goods wouldn’t work for fashion. We needed a discovery engine, not a search engine.”

That discovery aspect has resonated with consumers, especially when it comes to the popular celebrity boutiques on the site.

And the company has already learned a lot since the launch.

For one thing, people don’t typically want to go head to toe in a brand. “It’s the mixture of things that people [desire],” Suri said.

And those who spend time personalizing their own boutiques keep coming back. “They’re addicted,” he said.

Digital Dominance
PepsiCo’s Bonin Bough brought some outside perspective to the summit. As the company’s global head of digital, Bough shared that the driving force around technology there is change.

“We have to ask ourselves: ‘How do we survive in a world moving so fast?’” he said. “Those most adaptable to change [will survive].”

As a result, PepsiCo works constantly on its digital fitness, or its ability to adapt to changes in the digital environment. One method to help it stay current was to launch PepsiCo10, a program that matches technology, media and communications entrepreneurs with PepsiCo brands to activate pilot programs in digital media and social marketing. Out of 500 submissions, the company narrowed the field to 10 and is pioneering pilots with them, Bough said. The program moves into Europe this year.

“Digital is the beacon of culture,” said Bough. “It’s permeating every aspect of our lives.”

Fashion Social
Combining social networking and fashion styling, Polyvore.com boasts more than 7 million unique visitors per month, making it the largest community of tastemakers and stylists on the Web.

Shoes feature prominently on the site, according to Crane, and the top designers last month included Christian Louboutin (No. 1, used in more than 51,000 sets), Converse (No. 2, used in 39,000 sets) and Jeffrey Campbell (No. 6, used in 7,000 sets). A black leather pump by Nicholas Kirkwood and a leopard-print ponyhair extreme platform from Christian Louboutin were the top two shoe styles showcased by users during the period.

“Shoes feature disproportionally large in sets because they’re sexy, fun and complete the looks,” Crane said. “And often the top-used shoes were also the top sellers from designers.”

Polyvore also aims to engage users with special events and partnerships. Most recently, the site teamed up with Urban Outfitters-owned Leifsdottir in a styling event to coincide with the brand’s shoe launch, where 15,000 sets were created with the new product.

The New Ideeli
Flash sales have become an online phenomenon, but Ideeli is determined to set itself apart with unique editorial content and a bigger focus on footwear.

Company co-founder Paul Hurley acknowledged that the recession opened brands’ minds to the opportunity to dispense with excess inventory through flash sales. But he suggested that isn’t the only benefit.

“Because we have the right audience, we can help brands find an incremental customer in their target market, tell a longer brand story and even help them drive traffic to their core channels,” Hurley said.

According to the exec, Ideeli was actually built as a marketing platform. “We want to listen to the customer and her wants and respond quickly,” he said, adding that what she wants is content and commerce.

Hurley noted that Ideeli’s more than 4 million members also seem to want more shoes. The company experienced nearly twofold footwear growth in the last 12 months, and on surveys, women have overwhelmingly requested more shoes, according to the co-founder. “More than half of our top [shoppers] are heavy shoe buyers, and half of that group bought eight or more pairs of shoes in the last year,” he said.

The site also hopes to build its men’s base over the next year. “We are methodical about getting a new audience, and more details about that are under way as we speak,” Hurley said.

The company, which launched for summer 2009 as an app that provides consumers with rewards by scanning in-store items, is constantly working to update the shopping experience for users.

One way is by creating features that resemble video-game functions. “You have shopping and gaming at the core, so [users] have a purpose to stumble upon [the program],” said Sellinger.

The app also includes location-based items to make the program more specialized and to “drive loyalty,” he said.