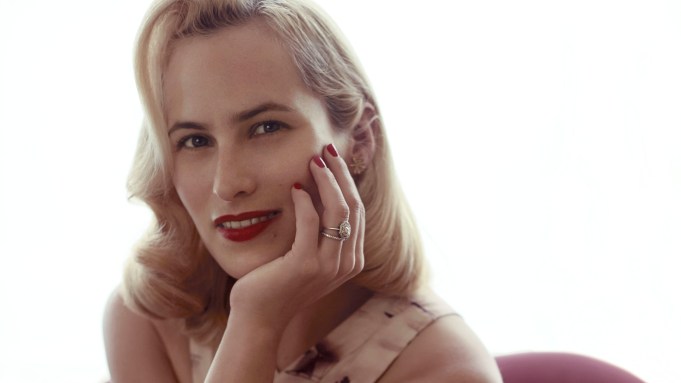 LONDON — Charlotte Olympia is set for a busy season, with a debut runway show set to take place Friday during London Fashion Week and three collaborations — with Agent Provocateur, MAC Cosmetics and Havaianas — landing in stores for spring.

Charlotte Olympia Dellal, the brand’s founder — who won the 2015 accessory designer prize at the British Fashion Awards in November — said she had long dreamed of her catwalk moment. Even when she was staging static presentations, she always created a set and conjured a mood.

“This is the season I’ve decided to jump and do it. It feels right. You can want to do something for a while, but if you don’t have the right timing it doesn’t work,” said Dellal, whose title is chief executive officer and creative director, from the office in West London she shares with Bonnie Takhar, the company’s president.

Her show should be as theatrical as they come considering Dellal’s love of Old Hollywood glamour and the bright, sculptural look of her shoes and accessories. Her current offer includes platforms with red sparkly lips on the toe or leopard insets; chunky bejeweled wedges with gold straps, and sandals festooned with fat faux emeralds. The brand’s long-running styles include pumps and flats adorned with little pointy ears and bewhiskered cats’ faces.

For the show, Dellal has dressed the models from the feet up, although she didn’t give any more details. “They will definitely have a head-to-toe look, so it’s not just shoes and bags. Everything is Charlotte Olympia.” The show will take place at The Roundhouse, a vast space in London’s Camden. It will be live-streamed on the company’s Web site, charlotteolympia.com.

Takhar said that given the evolution of the business, it was time to show on a runway. “It makes absolute strategic sense to engage in a fashion show, not only to take Charlotte’s visual expression to the next level but to very precisely communicate the various product categories and extensions that exist within the collections,” she said.

The company is growing across a number of areas, including retail, wholesale, product extensions and collaborations. It currently has 11 stores, including a new shop in Moscow with a local franchise partner. There are 230 wholesale doors and an e-commerce site.

Takhar said she and Dellal, who set up the business in 2008 after studying shoe design at Cordwainers in London, are building the company with longevity, rather than an exit strategy, in mind. Annualized growth over the past four years has been 45 percent a year and Takhar confirmed the company remains in expansion mode.

Earlier this year the brand unveiled a capsule collection with Agent Provocateur, mainly lingerie but also boudoir-inspired shoes. Dellal is a longtime customer and has an extensive archive of the brand’s designs. The new capsule collection includes Fifties-inspired bras, high-waisted, big underpants with removable suspenders, French embroidery and sheer black tulle mesh with spider jewel embellishments. There is also a shoe/stocking hybrid that mixes Lurex fabric with a stiletto-heeled boot.

The MAC collection, meanwhile, has a retro-glam vibe and will bow in March. Dellal helped design the products and packaging for the 26-piece collection, which includes three lipsticks – one each for blondes, brunettes, and redheads. Next month she’ll be traveling with MAC to launch the collection in the Far East. It will be distributed in about 800 doors worldwide.

“I love Hollywood glamour and how pieces, makeup pieces, were accessories for your dressing room table, proudly displayed. I was looking at makeup as an accessory in that sort of way, but I always think of makeup as an accessory itself. Like heels can change your outfit, so can a slick of red lipstick,” said Dellal, whose personal style is inspired by Rita Hayworth, her hair parted on the side with a 1940s-style wave.

With Havaianas, the half-Brazilian Dellal created three flip-flop styles and a beach towel, all riffing on her design signatures, which land at retail this month.

While it’s a big year for collaborations, Dellal and Takhar believe growth will come from the core categories, shoes and bags.

“There is some natural, organic growth that is still an opportunity within the business. It comes from retail and we’re nowhere close to fully penetrated or even half-penetrated in wholesale, and we have our e-commerce channel as well, which we have just really started to build,” said Takhar.

She said opportunities lie in Western Europe, including Germany, Scandinavia, Austria, Italy, Spain and Portugal. “In 2012 we focused on the U.S. market, in 2013 we focused on Asia and the rest of the world, including the Middle East, and then in 2014 we really started focusing on Europe,” she said.

Dellal added that the company is also “delving farther” into product categories such as bags, more classic footwear styles and the children’s shoe collections. It recently opened a shop at Harrods in the children’s department. About 80 percent of the business comes from shoes, with the remaining 20 percent from bags.

Takhar said one of her great challenges as she and Dellal plot the future of the company is shopper behavior in a landscape that is full of opportunity and highly competitive.

“I think consumer behavior has changed so dramatically in the last few years and it’s really about understanding where they shop, how they shop. I think everybody today is still trying to figure out the relevance of bricks and mortar versus e-commerce or where they cross over.

“Everyone has got very mixed opinions on it and I think that’s the challenge. Shoppers do cross over, they’re traveling into your stores, they’re shopping online, they’re not distinguishing. They just want to get hold of a product,” she said.