Cole Haan has linked with comedian, writer and political commentator Hasan Minhaj on a limited-edition footwear collection, launching in select U.S. and international Cole Haan stores on Nov. 10, with another drop slated for next month.

The first drop, two colorways of the 4.Zerøgrand Hikers, are waterproof boots with the footwear company’s signature sole technology, and the second release, the GrandPrø Rally Court Sneaker, launches in December and features a number of Easter Eggs.

Both the boots and the sneakers, ranging in price from $170 to $270, bear the words “live” and “survive” on the tongues, as well as the date Minhaj landed his first big television gig at “The Daily Show”: 10/9/14. He was the last correspondent to join the show before Jon Stewart handed the reins to Trevor Noah.

“All four styles are inscribed with the words ‘live’ and ‘survive.’ In 1982, my father arrived in America. He left his home to build mine, and he fought to survive so I could live. It’s been a mantra I’ve carried around with me throughout my adult life,” Minhaj said. 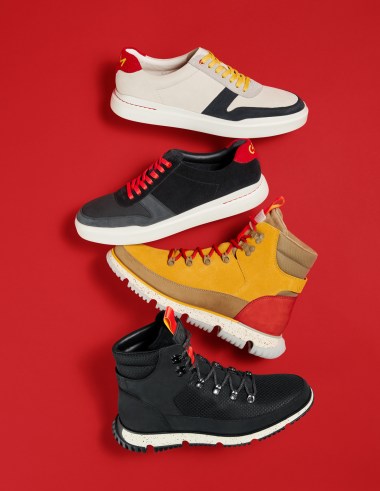 Minhaj, the former host and creator of Netflix talk show “Patriot Act With Hasan Minhaj,” worked closely with Cole Haan on the shoe, as well as Jeff Staple and the Reed Art Department, who have collaborated with Cole Haan for at least four years. Staple first approached Minhaj because of his body of work that has seen him awarded with two Peabody and Webby Awards and vaulted him onto Time’s 100 Most Influential People list, but when they met, they discovered that he also had a connection with the brand.

Staple worked with Minhaj to translate his ideas into the footwear. A yellow colorway of the hiker references an Indian spice market, while the Easter Eggs nod to Minhaj’s affinity for sneakers. In addition to the words found on all four of the shoes, the brand created a “CHM” icon, combining Cole Haan’s and Hasan Minhaj’s initials.

The pairing seems unlikely at first as comedians and talk show hosts don’t often collaborate on sneakers — “I guess me and Kevin Hart are vanguards in the fashion and shoe industry for our charm and raw athletic ability,” Minhaj said about his inaugural fashion collaboration — but he has a long history with the brand.

“Cole Haan has been there for me during some really life-changing moments,” he explained. “When I was still pretty unknown as a comedian and getting ready to interview for Jon and ‘The Daily Show,’ I realized I didn’t have a proper suit or dress shoes. I went looking for what to wear for a screen test, and I went to the Cole Haan store in Manhattan. At the store I saw this pair of black, cap-toe oxfords; they looked like sneakers on the inside with this blue and orange insole, and for some reason that spoke to me. So I grabbed the shoes, got the job, and ever since that specific pair of Cole Haans has been a good luck charm for. I still have them, in fact; they’re the pair I wore during the White House Correspondents’ Dinner.”

“The interesting thing is if you talk to people about how they come to the Cole Haan brand, it’s often when they’re working or doing what they’re best at,” said Cole Haan brand president David Maddocks. “Our customers are doing the things they want to put into the world and doing so in our product. Our campaign, ‘Write New Rules,’ is about the voice of our customer and the young people who are going to push the future.” Staple added, “Hasan makes perfect sense for this era now.”

“With Cole Haan, it felt like they were looking for more than just to put my name on something,” Minhaj said. “They trusted me to bring my voice and all of my ideas and sensibilities to this. And as long as that’s the kind of collaboration we’re talking about, I think this kind of collision of different types of creatives will always yield some fascinating results. It does feel like Cole Haan is breaking a bit of a boundary here. They talk about writing new rules, and I believe it — and I’m thrilled to have been able to work with them to bring this collection to life.”