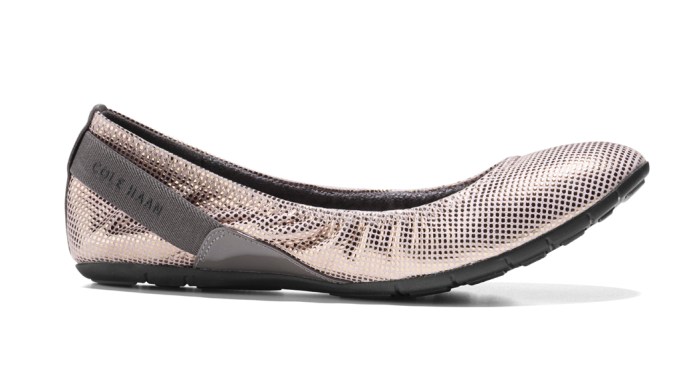 Cole Haan has placed the finishing touches on its fourth season of collaboration with the New York City Ballet. The partnership’s fall 2015 collection includes Cole Haan’s first ballet flat designs to include its ZeroGrand performance technology, which was first introduced to consumers through its men’s wear line last year.

Like with previous NYCB collaborations, Cole Haan consulted company dancers Sara Mearns, Megan Fairchild, and Gretchen Smith on what footwear issues they encounter everyday. “We actually met with a design, merchandising, and innovation team. Megan, Sarah and I were in the room for a few hours explaining what we need for our feet and our body,” Smith explained of the process, while en route to Washington D.C. for City Ballet’s residency at The Kennedy Center this week.

“I’m happiest when my feet are closest to the ground and Sara had a lot to say about shoes and how they affect her back,” she added of the pointers raised throughout this season’s collaboration.

The collection’s eight designs have been updated with new fabrications. “They are very minimalist, with very clean lines. We are really happy with what we created,” Smith said of the ballerina styles, which come fabricated in snakeskin-embossed and metallic leathers.

But before then, Smith has some pretty weighty tasks at hand. The dancer — who has been with city ballet as a member of its corps de ballet for the past eight years — has recently been cast in an increasing amount of solo and pas-de-deux roles. This week in D.C. she will dance in Alexei Ratmansky’s “Pictures at an Exhibition.”

The company’s spring season, opening on April 28, will include the historic ballet “La Sylphide” as part of its repertoire for the first time. Smith just found out that she will dance the role of Old Madge, an evil witch, in the production.

“It feels really surreal, I feel very lucky in any moment that I have to push my craft. I am very grateful that they are giving me the opportunity,” she said of her increased stage presence.

So is a promotion to soloist on the horizon? With recent company departures from the likes of principals Wendy Whelan, Janie Taylor and Jenifer Ringer, it would seem that the company has some wiggle room for upward mobility within its ranks.

According to Smith: “It’s what I’ve been working towards, I hope there is a promotion — absolutely, that’s what I want.”