Common Ace, a Sneaker Destination for Women, to Launch in May

The new platform by Sophia Chang and Romy Samuel aggregates brands such as Nike, Acne and Chanel for one-stop shopping for women.

Common Ace, a new sneaker destination for women, is launching in May.

Sophia Chang and Romy Samuel are launching Common Ace, a new sneaker destination for women, on May 15.

Common Ace is an affiliate network that aggregates streetwear and sneakers from partnered brands and sites such as Kith and Sneakersnstuff, alongside luxury and contemporary labels including Chanel, Gucci, Acne Studios and Sacai.

According to Samuel, who previously worked at MassMedia Studios and oversaw digital marketing campaigns for Dove, Lipton, Magnum Ice Cream and Audi, among others, Common Ace has been in the works for over a year, but plans moved along much faster after meeting Chang at an event in Los Angeles.

Related: The Sneakers Are Still Dropping, but for How Long?

“It’s been a huge passion of ours and we’ve been working toward this for a long while now,” she said. “The bottom line is we wanted to solve a problem for ourselves. It was staring us in the face for so long.”

The problem is how cumbersome shopping can be for women who are interested in sneakers and other categories. Chang said because the selection is so much smaller, she has to have 10 to 12 tabs open to casually shop a wide assortment of brands from a number of sources simultaneously.

“We know the need, we know the frustration, we’re organizing the chaos and hopefully drive that traffic toward retailers and provide women more access,” said Chang, the New York native who currently resides in Los Angeles.

Chang has worked on projects for HBO, the NBA and Samsung, as well as Nike, Adidas and Puma, for whom she designed a collection in 2013 that became the company’s top lifestyle grossing line. “Everything I’ve done in my career and life and work has led me to this project,” she said.

“There isn’t a center hub that really brings this community together. Sales are important, but we’re solving a problem in accessibility and being able to offer legitimate access.” 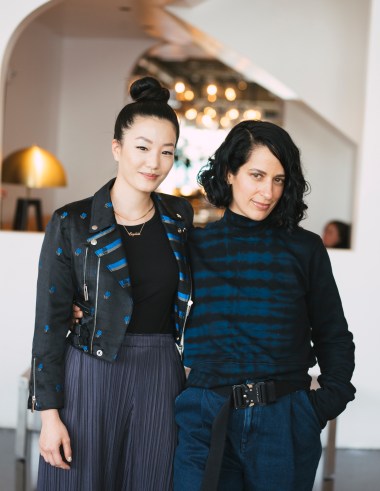 Women have not been the focus of sneaker companies for years, but that doesn’t mean there hasn’t been demand. And the pendulum is starting to swing as more companies shift their focus to the female consumer through collaborations with figures in the women’s sneaker community or collections and ambassadorships with global superstars.

The launch of Common Ace seems well timed with the increase in demand for women’s sneakers, but Samuel and Chang reassert that the platform is an overdue answer to a problem, one they expect will attract new consumers as well.

“It has grown, but I don’t think in any way, shape or form it’s reached its peak,” Samuel said. “The majority of the friends I grew up with didn’t come up in the space I came up in. They’re asking me questions and not following the bigger names in the community and I think those women are now starting to catch on.”

Chang added, “We want to be able to create that access point for women that don’t have access to Kith or Extra Butter stores. Hopefully this year or next year we start working toward the single checkout process.”