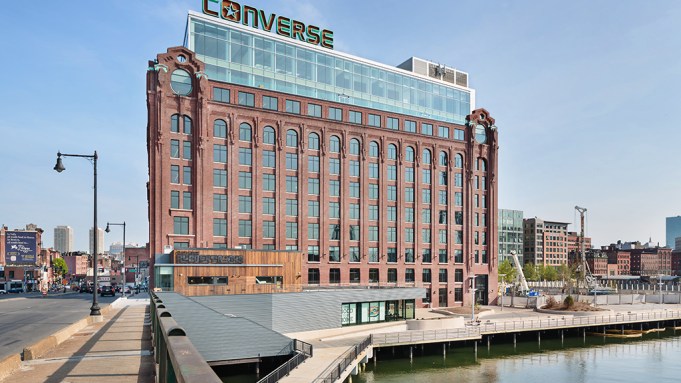 BOSTON — Over the past decade, Converse has transformed itself from a passé basketball label to a lifestyle brand favored by artists, musicians and young Hollywood. Now a move out of the suburbs to a 10-story loft space downtown sets the stage for further ambitious growth.

The company renovated a 214,00 square-foot turn-of-the-century brick factory on Lovejoy Wharf, a formerly decrepit section of Boston’s waterfront, for its new headquarters.

“The move means good things for Converse,” said John Shipman, the company’s senior director of workplace design and connectivity. “As a company, we are inspired by the possibilities of what it means to be closer to our consumer and to have even more access to creative talent. This is the next logical evolution of our culture and our brand.”

The new space — styled with concrete floors, exposed steel beams and swathes of wharf wood reclaimed from the site — has a recording studio, performance deck overlooking the water, café, lounge, gym and gallery space. The brand will open a flagship, featuring a made-to-order atelier exclusive to the location, on Friday on the plaza in front of the new headquarters.

The company will open archives and an innovation lab in July, in a separate building about five minutes away. Taken together, the new properties signal how serious Converse is about talent and growth.

In fact, though more than 400 people work at headquarters, the space can hold twice that headcount. Converse, a $1.7 billion subsidiary of Nike Inc., posted a 24 percent year-over-year gain in the second quarter of fiscal 2015, according to Nike’s filings. A recruiting video features chief executive officer Jim Calhoun touting Converse’s culture and new facility.

The 3,500-square-foot store, Converse’s sixth U.S. door, “stands in the footprint of the new world headquarters and is therefore essentially the face of Converse,” noted David Kelsay, a former Nike executive who is now Converse’s vice president of global retail. “This store is a true destination, providing an unfiltered brand experience with access to new, exclusive, customizable and even experimental footwear and apparel. Boston will be the first Converse retail location where fans will be able take the idea of the “Made By You” campaign to the next level, by creating their own one-of-a-kind Chuck Taylors from scratch.”

The back of the store, “Blank Canvas,” is dedicated to customer creativity. There are two customization options: InkBar, which allows customers to print graphics on basic canvas styles, and Workshop, a space where customers can — by appointment — design every detail of a low- or high-top Chuck, from the fabric to the grommets. Those shoes start at $150 and take four weeks to produce.

The store uses the same industrial materials as the headquarters: oxidized metal, wharf wood, polished concrete. A section of Boston-specific apparel and footwear sits at front. A pair of high-tops in distressed green leather reference the verdigris of the building’s copper trim and new Converse sign. Core Chuck Taylor styles have been customized with a sole with a red stripe, a reference to the red line that marks the Freedom Trail, which crosses Boston Harbor near Lovejoy Wharf.

At rough estimate, the store is 65 percent footwear, with 175 different styles including Missoni, Warhol and John Varvatos product. The balance of the assortment is T-shirts, fleece and casual bottoms. There are no dressing rooms; sneakers are the main business here.

The store and headquarters underscore the degree to which Converse has let go of sport and embraced arts and music. Paintings of basketball greats like Larry Bird wearing his one-star Weapons, for example, are destined for the archives. Meanwhile, furniture designers have created funky chairs out of Converse canvas, works from graffiti artists hang everywhere, and the main social lounge is decorated with posters from the brand’s CRT Live program, which pairs well-known performers with emerging artists. The recording studio, called Rubber Tracks, allows Converse to expand its program of allowing musicians to record music for free.

Shipman calls it “a great example of the brand finding a meaningful way to connect with consumers and give back to communities that have embraced us for decades and helped us become the brand we are today.”

But of course, no one is forgetting the iconic shoe that has truly made Converse’s fortune. The lobby features a “chandelier” constructed of 170 pairs of black Chuck Taylor high-tops dangling down, with LED lights shining through translucent soles.