The Nike Inc.-owned brand opened its flagship earlier this month on the Third Street Promenade in Santa Monica, Calif., with customization its centerpiece. 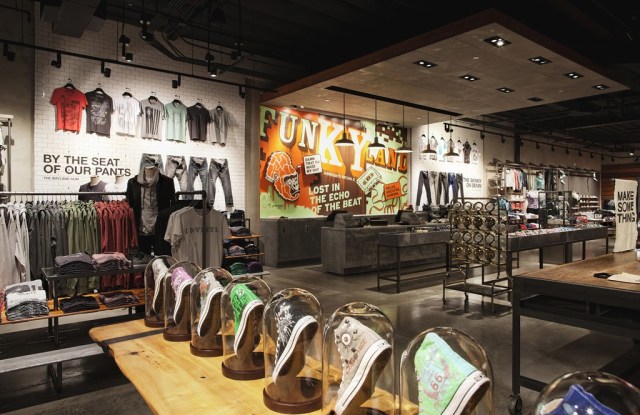 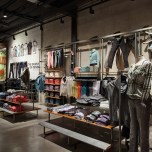 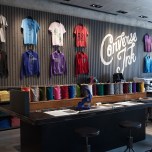 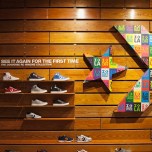 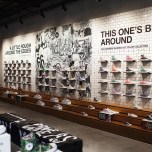 LOS ANGELES — Converse is out to put customers in charge of their shopping experiences.

After entering full-price retail in 2010 with stores in Boston and New York, the Nike Inc.-owned brand opened its debut West Coast flagship earlier this month on the Third Street Promenade in Santa Monica, Calif., with customization its centerpiece. About a third of the 7,000-square-foot store is devoted to it, with the rest of the space split about evenly between apparel and footwear in Converse’s largest global presentation of its selection across the categories.

“People have been writing on Chucks for years and making them their own, so this is allowing them to do it here,” said Jonathan Tappan, Converse’s general merchandise manager, direct to consumer. Added Dave Powers, Converse’s vice president of global retail, “Our goal here is to inspire creativity with customer-designed product.”

Half of the store’s 25-foot window is covered with an American flag composed of Converse shoes similar to a display in New York, but the other half is a live look-in at a 750-square-foot customization station, which is almost triple the size of such stations at Converse stores elsewhere. Using iPods set up at the station, customers choose from 277 graphics or bring in their own images to personalize apparel, footwear and accessories before watching maestros, Converse’s name for staff with graphic design backgrounds it trains in personalization, complete the process in typically 20 minutes to two hours with machines housed within the station.

Behind the station, Converse has erected a craft workshop table of sorts filled with grommets, drawstrings, studs and eyelets that customers can rummage through to individualize merchandise. For inspiration and purchase, examples of modified shirts, shoes and more made by the store staff are displayed throughout. Converse is also partnering with local artists — Jimmy Danko is its first in the Los Angeles area — to produce customization graphics and art to decorate its stores. On top of the base price of the goods, customization costs $10 per print for apparel and $20 to $30 for footwear, plus $5 extra for additional laces and ribbons.

Converse has followed Nike’s NIKEiD program in embracing customization. As shopping shifts online, Tappan and Powers explained, it gives customers a reason to come into stores and inspires loyalty from customers who are attracted to unique merchandise. “Pretty much anything in the store can be one-of-a-kind,” said Tappan. Converse customization is available online, but it takes three to four weeks and doesn’t allow customers to observe the process.

At the Santa Monica store, Converse has enhanced customer participation in shoe shopping, as well by incorporating a service window at which customers can order their own shoes instead of waiting for employees to carry them out to the store floor and can peer into the stock room. “We look at this as a bit of a revolution in the service industry,” said Powers, who noted the service window concept was piloted in New York and its size has been doubled in Santa Monica. It helps speed shoe shopping for customers who know what they want when they come to the store, and it keeps shoe staff on the floor because they don’t have to go into the back room every time they fulfill a request.

Powers said Converse, which had 58 stores, including factory outlets, at the end of Nike’s last fiscal year, plans to open five to 10 full-price stores within the next 18 months, and its fourth is slated for an April opening at the Garden State Plaza Mall in Paramus, N.J. He said existing stores “are doing great, on or above expectations.” Although Converse wouldn’t discuss the performance of its newest Converse store, industry sources estimated it would generate at least $1,000 in annual sales per square foot.

“The stores have really opened up everybody’s eyes to what we have to offer,” said Tappan.

The Santa Monica store has 225 apparel stockkeeping units and 230 footwear sku’s of Chuck Taylor, All Star, Jack Purcell, Star Chevron, One Star, Skateboarding, Converse by John Varvatos, Kids, and other collaborations and special-edition styles, notably a Los Angeles pair for $85. The brand’s apparel focus is on T-shirts, fashion fleeces and denim. Singling out a best-selling $78 Allen Street Hoodie in the women’s line, which is only available in-store at Converse’s locations, Tappan said, “This is the attitude of our girl. It is more fitted. It is a fashion style. It is not about your basic fleece.”