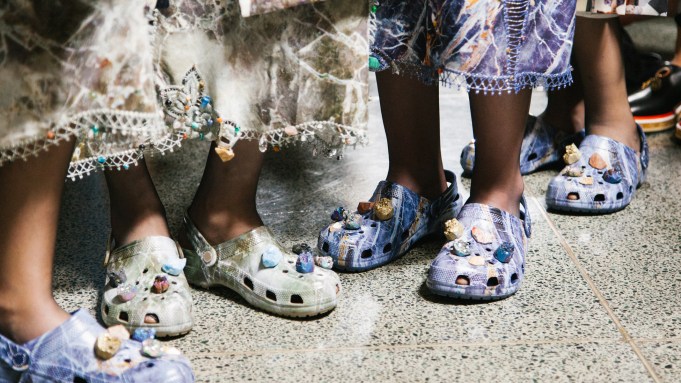 Crocs’ clogs is aiming to amp up their style quotient for spring — and it’s starting with Christopher Kane. In an ironic touch, the designer accompanied much of his 10-year anniversary collection show Monday with “bespoke” Crocs clogs.

Until Monday morning, the style was best known for perennially adorning the feet of culinary persona Mario Batali — who has a well-documented affection for the brand’s “tangerine” colorway.

“We’ve started seeing a real resurgence. I think we have definitely seen something bubbling away. I think in the marketplace we are seeing more exaggerated silhouettes and right now is a time in the fashion cycle where [our] clog is starting to feel very fresh again. Its silhouette works with what’s trending in the rest of the market,” Crocs senior vice president of global product merchandising Michelle Poole told WWD.

Kane approached the label three months ago with his idea to include Crocs clogs in his show. The company’s team developed four marbleized finishes and two solid colors specific to the collection, and worked with Kane to adapt its “Jibbitz” shoe charm concept to suit the designer’s aesthetic. Each Jibbitz is handmade to include natural gemstones.

The clog’s shape was not altered for Kane’s use. “He loved the idea of playing with proportions as well as that classic bigger shape and how that would fit in with his collection,” said Lucy Thornley, Crocs vice president of women’s and kids product.

While market details have yet to be finalized, Crocs estimates that the clogs will retail for more than $150. In contrast, the average Crocs clog retails for about $35.

The Kane editions will be sold with its custom Jibbitz included and the designer’s insignia stamped on each ankle strap. They will be retailed through “a very select list of stores that Christopher Kane current distributes to,” said Poole, and will not be sold in Crocs’ own stores.

“I think when you look at the items that Christopher built, it’s something really special. Part of his design aesthetic is creating the extraordinary from the ordinary. There is beauty in all of the individual gems and how they really enhance the overall shape of clog, plus the marble finishing. And up close all of these handmade charms are something really special,” Poole said of the incentive for consumers to purchase Kane’s Crocs over the less expensive, mass-market styles.

Having caught the fashion world’s attention, the label intends to introduce new styles, colorways and finishes to capitalize on the moment. While Crocs web site presently categorizes its uses to include nursing, chef, camping and shower, could Lower East Side strolling soon be added to that mix?

“Really reigniting the clog silhouette is a strategy for us,” Poole said, acknowledging that future collaborations are being mulled, but that details could not yet be confirmed. “Consumers are looking for brands with icons and trust brands with icons. You could draw a picture of clogs anywhere in the world and people would know it’s a Croc. It’s about making sure one’s icons are as relevant as they can be. It’s about giving people another opportunity to think of Crocs,” she said.

The brand’s forthcoming spring collection — to be shown in New York in early October — will exhibit new fashionable flourishes, according to Poole. “I think we are looking to elevate and extend our reach as a brand. Our spring line has a lot of fresh, unexpected excitement. New colors and graphic new silhouettes.”