The historic brand founded by Henri Bendel has undergone a flagship renovation for the first time in decades.

Now under new ownership, the Belgian Shoes store has been carefully renovated — but its signature footwear, hand-stitched in a rainbow of colors and topped with a little bow, will remain intact. The store’s newest iteration officially opened on Friday.

Founded in 1955 by Henri Bendel, the company became a joint venture in 1979 when the legendary retailer brought on his Belgian manufacturer Georges Vanacker as partner.

The shoes have been produced in the Vanacker family’s factory ever since. When Bendel’s son died in 2013, a handful of potential buyers, from big fashion manufacturers to venture capitalists, were said to approach the company about ownership. Vanacker’s own daughters — Barbara, Vanessa and Sarah — stepped up to the plate, becoming the brand’s proprietors in 2019.

“We were born into the shoe business,” Barbara said of her intentions for the company. “We thought we just want to put our own touch into the store and have something of our own.”

The Belgian Shoes flagship closed for renovation throughout January, but not before the brand held its first sale, which attracted artist-types, financiers and various creatives — both young and old — in lines that snaked down the block. If there were ever a time to invest in strengthening the brand’s fan base for a new generation, it would appear to be now. 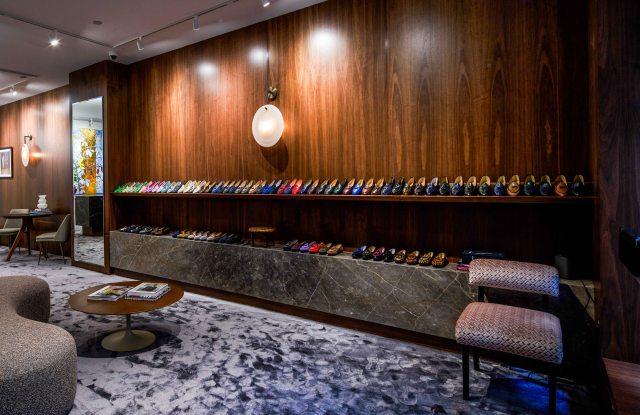 “We have this kind of cult following, people love being in the know and that no one knows who made their shoes. We are very protective of our limited production and the lack of overexposure; our customers like that,” said general manager Pana Diamantopoulos. The company has hired its first social media consultant to incite further desirability.

The Vanacker sisters sought out a store update that “feels like a living room where people feel welcome — when you own a house you change an interior from time to time as well. It will still have a Belgian touch,” Barbara said.

While the Belgian Shoes cult members are “resistant to change,” said Diamantopoulos, they may be comforted by the store’s thoughtful renovation — warm wood panel walls, plush carpeting and two long shelves spotlighting Belgian Shoes’ innumerous color options. The shoes’ price of about $450 a pair will remain.

As for the brand itself, the Vanacker family has no plans to double down on expansion. They intend to gently update some of the company’s textile and colorway offerings, while adhering to limited production and distribution.

The brand currently issues about 10,000 pairs per year — a number Barbara said would be hard to push further. “We have 12 people in total making the shoes, most of the work is done at home by home stitchers. We are in a small town 20 minutes away from Bruges in a city that used to be known for its shoes with over 100 factories — now there are only two left.” The factory’s operations are so strained that custom orders take 12 weeks to complete.

“We are not interested in wholesale; this needs to be an exclusive very unique product from another time and want to keep it that way,” said Barbara.

“From time to time we will add new styles, but we want a gradual growth — we don’t want to double the business, that’s not our intention. Mr. Bendel always said ‘Small is beautiful.’ We believe in that and don’t want this to be a mass product.”