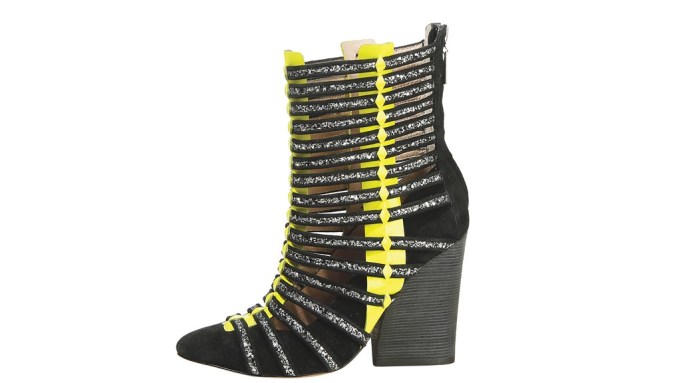 “Shoes are the same as jewelry — it’s an emotional buy. You gravitate towards something different and unique. These shoes are more like jewelry for your feet,” Jodie Snyder said of Dannijo’s first footwear endeavor.

“We call them the Zeppelin because they are so rock-star,” Danielle Snyder interjected, referring to the above booties, which will be available for sale come August when they launch on Matt Bernson’s Web site at mattbernson.com, shopbop.com and dannijo.com. In total, offerings will include five styles — from denim Maryjanes with a glitter strap to calf hair and pony suede fringe boots with a conical glitter heel — and will retail from $238 to $420.

Danielle and Jodie Snyder co-founded the accessory brand four years ago. The layered, entangled necklaces comprised of mixed 18 karat yellow and rose gold, silver and gunmetal chains that originally got the girls noticed have evolved into a collection of beaded bib necklaces that are updated seasonally.

The company is on track to have retail sales of at least $5 million this year, and its Web site — which Jodie calls “our number one door” — saw a 200 percent increase in sales from 2010 to 2011. For 2012, the two expect e-commerce sales to increase by another 600 percent. So far, sales on dannijo.com last month were higher than January, February and March of last year combined.

The brand is also releasing a follow-up to its collaboration with blogger Leandra Medine of the Man Repeller, Mr Dannijo, in April on dannijo.com.

After the first collection sold out within two weeks — and a second production run that was quadruple the size of the original also sold out — the three set to work on creating the Mr Dannijo “Eye Spy” collection. Prices will start at $118 for a ring and go up to $450 for a bib necklace adorned with a pair of jewel-encrusted evil eyes.