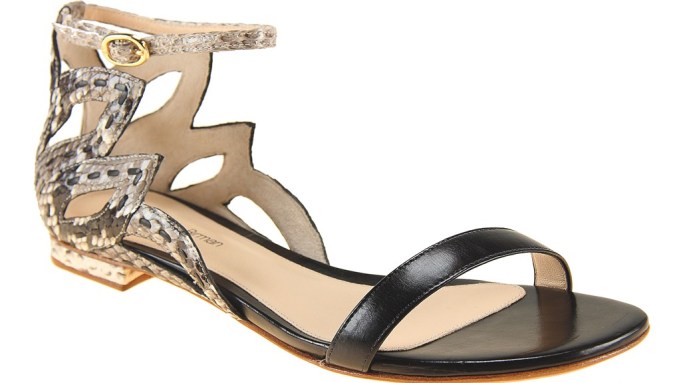 The category is experiencing a shift, with a group of high-end brands — Charlotte Olympia, Nicholas Kirkwood, Tabitha Simmons and Alexandre Birman among them — gaining entrée into the sector’s retail space.

While it’s less a changing of the guard — Manolo Blahnik, Jimmy Choo, Prada, Gucci, Chanel, Yves Saint Laurent and Christian Louboutin remain perennial bestsellers — the above designers have edged their way into the minds (and closets) of trend-conscious consumers.

Department stores especially are placing a huge emphasis on the category, pumping capital into extensive renovations at their flagships. Barneys New York unveiled a revamped designer shoe department last week on its fifth floor and Saks Fifth Avenue did the same in 2007 on its eighth floor, with an additional expansion taking place last month.

“People are seeking out extreme fashion from footwear selections, and it only helps the excitement factor when we’re selling shoes. The more that we’re able to bring these brands in and market them, the more they become a designer staple. We need them from a merchandise perspective to add newness but also from a business point of view,” Saks Fifth Avenue fashion director Elizabeth Kanfer said. “Because the major brands can only get so big, we need to think of the next crop of staples in the store. The new guard becomes less emerging and more of a substantial part of our sales.”

Last September, WWD reported that one of the fastest-selling designer shoe styles at the retailer’s flagship here were $1,540 suede fringe platform wedge booties in burgundy from Kirkwood’s fall 2011 collection.

But this is not the case in every location, Kanfer explained. While Kirkwood’s elaborate designs might fly off the shelves in New York (it’s also a test ground for emerging brands), in the less urban stores and non-flagship locations the customer often doesn’t know who these designers are — something the retailer is keen on changing.

“Our hope is in the next several years we can roll these brands [Kirkwood, Simmons and Brian Atwood] out to other locations. We hope these emerging brands become more established and we can offer them in more stores. It’s the direction we’re taking footwear,” Kanfer said, noting that the store has begun carrying Simmons fall collection on saks.com and will roll the line out in two doors, the New York flagship and Boston.

Of this group, though, it’s Atwood who was the first to be accepted into the designer shoe circle. He launched his namesake line in 2001, and is now carried in the majority of the department store’s doors. “He’s out of the new guard and into the established emerging designer category,” Kanfer said.

As for the “new guard,” one of the fastest-growing labels is two-year-old Aperlaï, a French brand designed by Alessandra Lanvin and known for its architectural, elegant silhouettes with unexpected details, such as hand-painted mirror or marble effects on velvet, lizard or suede. The line, which retails from about $600 to $1,000, was picked up by Saks upon its launch in 2010 for the spring 2011 season and is now available at nearly 60 doors worldwide, including Harvey Nichols, Luisa Via Roma, L’Eclaireur, Opening Ceremony Tokyo and Tsum in Moscow. Domestically, it’s currently sold at Saks, Scoop, Stanley Korshak, Fivestory and Fred Segal.

According to Lanvin, married to Jeanne Lanvin’s grandson Hubert Lanvin, business has doubled in terms of doors since its first season and has increased three times in terms of sales volume.

“It’s a very prolific period for shoe design. There are a lot of big talents outside that I love,” Lanvin said, listing fellow designers Simmons, Laurence Dacade and Gianvito Rossi as each having successfully developed a particular signature. Of her own signature, Lanvin points to the graphic heel introduced in her fall 2011 collection, an ode to Picasso’s cubism. The handmade heel is a lightweight, rectangular structure that the designer evolved for fall 2012. Lanvin will present spring 2013 next month, for which she has developed a new style that she coined the “Lady Cat” — an “intense tropical green” snakeskin and suede sandal with a curved “talon” hugging the ankle, adorned with five gold buttons resembling a spine.

For Ken Downing, Neiman Marcus fashion director and senior vice president, Charlotte Olympia is one of the “next big, most important footwear names” in the industry right now. The department store has been a strong supporter of the line for several seasons — styles such as the whimsical 6-inch Dolly pump with a floating gold platform are carried in 26 Neimans doors and on neimanmarcus.com — and although Downing is aware of her cult following within the industry, he knows the collection still has a ways to go in terms of becoming a household name.

He also cites Simmons in the same breath, calling her understanding of styling and the ability to have her finger on the pulse of fashion “not only as it’s happening, but before it happens” as instrumental in the brand’s upward growth trajectory.

In the past year, Simmons’ three-year-old collection has seen a 25 percent increase in business, and is carried in about 60 doors worldwide, including Le Bon Marche, Colette, Harrods, Selfridges, Lane Crawford, Saks Fifth Avenue, Barneys New York, Bergdorf Goodman and Neiman Marcus. Shoes start at $495 for lace-up espadrilles, and go up to $2,295 for boots lined in fur.

“Footwear has opened up a lot more. Before, there were the three or four big giants and not any new ones. People are much more open to newer brands,” newly minted CFDA Vogue Fashion Fund finalist Simmons told WWD. The designer already has a “signature” — the Bailee, a double ankle-strap sandal with corseted, lace-up detailing along the back. Simmons is often asked to bring it back in the original colors it came in several seasons ago, and she said her collections always have a “Victorian bootie in there somewhere.”

Like Simmons, Alexandre Birman’s predominantly exotic-skin footwear business has grown about 25 percent in the past year, the U.K. being the fastest-growing market. The Brazilian native told WWD that he’s really invested in growing distribution for the brand outside of the U.S. It’s carried in about 150 doors worldwide (74 in the U.S.), primarily at department stores such as Saks Fifth Avenue, Neiman Marcus, Harvey Nichols, Lane Crawford and Printemps. Birman already has one freestanding door in São Paulo, and a second will open in the same city at Iguatemi mall next month.

The label was originally picked up by Bergdorf Goodman four years ago as a contemporary line and sold on the retailer’s fifth “5F” floor, but Birman’s spring 2012 collection was moved to the designer shoe department on the second floor.

Nicholas Kirkwood has also seen robust growth. The business has tripled in size since 2010 and is available at 140 doors worldwide (throughout 36 countries). Since its launch in 2005, the brand has become synonymous with unique materials and innovative constructions, such as a rapid prototyping technique, also called 3-D printing, that allows for the production of unusual heel shapes not possible from a mold (this process was used to create the silver-and- wood-effect wedges in Rodarte’s spring 2011 collection).

“In the past two years, we’ve expanded the collection. It’s double the size with other categories and different heel heights. Now, there’s less focus on the platform and even more on the midheel. Two to three years ago, it got to the point of ‘how crazy can you make the shoe,’ but it’s coming back down. It’s gone through this whole cycle in a way,” Kirkwood said of the evolution of his $595 to $2,500 footwear since its launch in 2005. This past May he also celebrated the opening of his second freestanding store in the Meatpacking District here, following a first door in London a year earlier.

But is there a difference between the customer who buys Kirkwood’s peep-toe glitter lace-up booties and the one who gravitates toward Jimmy Choo or Manolo Blahnik?

Not so much, according to Net-a-porter’s buying manager Sasha Sarokin.

“While our customers love their Jimmy Choos and Louboutins, they’re aware of new designers and are confident in fashion — so they’ll respond to a beautiful shoe across a breadth of designers. They’ll wear their studded [Louboutin] Pigalles, [Choo] 24:7 pumps and colorful [Olympia] Dolly pumps all in the same week,” Sarokin said.

Downing agrees. He’s observed that it’s about the style — not the brand. The Neiman Marcus shopper is trend-curious and seeks immediate “credit” in her wardrobe — and she’s attracted to a pair of shoes that she doesn’t have. According to Downing, these women follow fashion in print and online, they know the silhouettes and colors that are trending and they want these new shoes immediately, and its not as important who the designer is.

When it comes to purchases within the fashion assortment, it’s not about necessity with this consumer. Downing and Kanfer both said emotion contributes heavily to the women buying shoes of this caliber — and in the end, what she’s looking for is newness.

“What Blahnik did with ‘Sex and the City’ was bring a heightened awareness of designer footwear, and very early on Louboutin was involved with putting designer shoes on runways,” he added. “They’ve paved the way for young talents to express themselves and play in the arena of fashion footwear.”