Velasca, which offers Made in Italy men's shoes at affordable prices, is about to inaugurate a store at 250 Elizabeth Street, in NoLIta.

Velasca shoes are handcrafted by artisans in Italy

MILAN — Velasca is gearing up to bring its accessible Italian style to the U.S.

The director-to-consumer footwear brand, which was established in 2013 in Milan by Enrico Casati and Jacopo Sebastio, is about to open its first U.S. store in NoLIta in New York,.

According to Sebastio, the company signed the 10-year lease agreement for a retail space at 250 Elizabeth Street in March 2020 but the opening was postponed due to bureaucratic issues linked with the COVID-19 pandemic.

“We can’t wait to open the store, where there are already 800 pairs of shoes which are ready to be sold,” said Sebastio, who added that the boutique will serve as warehouse for online shipments in North America. “We have good sales results in America, but since we didn’t have a logistics center in the country the duties on returns were denting our profits. Now with the store, we have great potential to grow in the North American market, especially through the e-commerce.”

Born as a brand with the mission of connecting Italian artisans with global consumers, Velasca kicked off its activity in 2013 with an online store and opened its first boutique on Milan’s via Tortona a year later.

“Since in two months from the opening of the shop we saw our numbers increasing tenfold, we decided to turn our digital company into an omnichannel business,” said Sebastio, who added that as of Dec. 31, 2019, half of the company’s revenues were from online and the other half was generated by the brand’s directly operated brick-and-mortar stores.

Along with the store in New York, Velasca is expanding its retail network with a shop in Naples, opening this year. Currently, the brand operates nine boutiques in Italy, as well as a store in Paris and one in London. 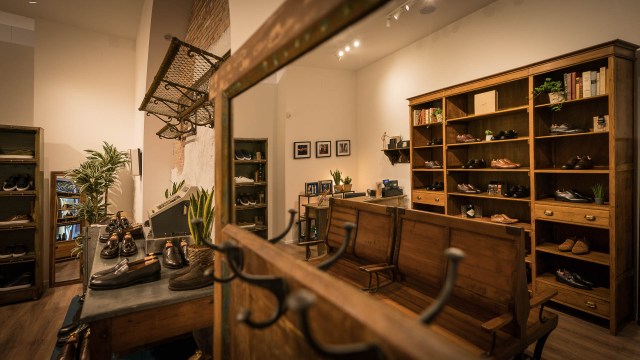 Like the majority of the companies in the fashion sector, Velasca, which has two private equity investors, P101 and MIP Sgr, in 2020 had to adapt to the new market scenario generated by the pandemic and succeeded, also thanks to detailed data analysis, at redirecting consumers to the online store. While Velasca is mainly known for its high-quality men’s formal shoes, which are sold at prices spanning from 180 euros to 250 euros, during the lockdowns the company invested in the development of more informal styles, in particular boat shoes for summer and booties for winter.

“Thanks to the flexibility of our company and to the close relationships we have with artisans we succeed at limiting the losses and we closed 2020 with 8 million euros of revenues, flat compared to 2019,” said Sebastio, who also expects “a strong positive rebound effect this year.”

Sebastio, who expects the company’s revenues to increase 60 percent in 2021 compared to 2020, said Velasca will continue to grow thanks to the introduction of product categories.

In particular, the company is working to expand its offering to women’s shoes. “We are not planning to launch hyper-feminine shoes, but it’s going to be an interpretation of our designs, which can already be considered unisex,” said Sebastio.

At the same time, the company’s ambition is to become a lifestyle brand, introducing a range of Made in Italy pieces, including knitwear, denim, outerwear, pants and shirts.

“In five years, we plan to offer men and women a full wardrobe reflecting the authentic Italian style,” added Sebastio.