The brand is opening a monthlong pop-up in SoHo just weeks after closing a Series A funding round led by Reddit cofounder Alexis Ohanian.

The Atoms pop up at 264 Elizabeth Street

According to “The Whole Foot Book: A Complete Program for Taking Care of Your Feet,” 60 percent of people have different-sized feet. The Brannock Device, a foot-measuring tool, helped people see the differences in their feet, and more recently Nike launched a digital foot-measuring technology that further supported the claim.

But now the ability to buy the right size for each foot is made possible with direct-to-consumer shoe brand Atoms, which is opening its first pop-up in New York at 264 Elizabeth Street this Friday.

Founded by Waqas Ali and Sidra Qasim from Pakistan, Atoms officially launched in June with a simple sneaker in whole, half and quarter sizes to get a more precise and accurate shoe fit. The duo partnered with a material scientist in South Korea to develop their first silhouette, Model 000, which is built almost entirely from scratch. “We wanted to go to an atomic level to make the shoe better,” said Ali at the company’s Brooklyn Navy Yard headquarters.

Atoms sneakers have a custom insole, midsole and rubber outsole that are all unique to the company, elastic laces so the wearer doesn’t have to tie and untie the sneaker, flat eyelets so the laces don’t spin, a knit TPU-coated yarn and polyester upper, and copper lining to combat odor.

The rubber outsole also has holes to reduce its weight, and the sneaker’s tongue has a band to keep it in place. Ali added that building every facet of the shoe influenced the name of the company and its logo, which is a group of atoms that look like a flower.

New customers are sent three pairs of shoes in quarter sizes and are to keep the best fitting pair and return the remaining two. The $179 sneakers are available in white, all black and black with white sole, gray for existing customers, and neon, which is available for preorder.

“When we started working on this, we started doing research with our customers and our friends and were asking them what’s your shoe size and they would say ‘sometimes 8 sometimes 8.5, depends on the brand.’ People don’t know their actual shoe size. There should be a way for people to know,” Qasim said.

The ability to send multiple sizes and keep mismatched sizes is easier for the company now that they’ve combined their office and fulfillment center in one location. The change also allows for them to engage with their customer in more fun ways, like one instance where a customer asked for a picture of actor Danny DeVito with their purchase, which one of their employees happily obliged by sending a sketch. 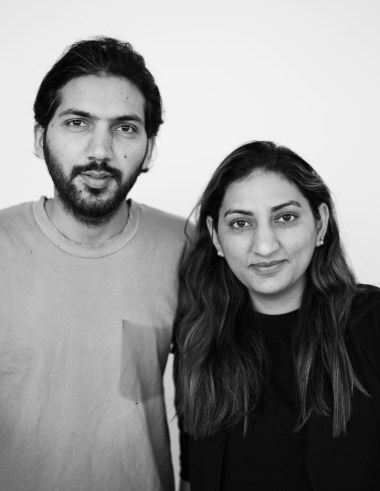 Atoms will be engaging with their customers in New York more directly, beginning this Friday. Customers will get to try on different shoe sizes at the monthlong pop-up and experience events like panel discussions about curation hosted by Lauri Freedman of the Whitney, as well as film screenings, book discussions and question-and-answer sessions with guests such as Nicolas Heller, better known as New York Nico, Subway Book Review founder Uli Cohen, and Humans of New York founder Brandon Stanton.

“The desire is that when people wear our shoes, we want them to do good things,” said Ali. “People will come to our events and hopefully learn things that will inspire them to do good in their own ways and have the right shoes to do the work.”

Atoms this month closed its Series A funding round for $8.1 million — “We’ve never raised this much money before,” said Ali — from Kleiner Perkins; LinkedIn chief executive officer Jeff Weiner, who also became an adviser for the company; Acumen founder and ceo Jacqueline Novogratz; rapper and known investor Chamillionaire, and Initialized Capital, the investment firm started by Reddit cofounder Alexis Ohanian. The founders called out investor Aatif Awan for his personal contribution to Atoms’ seed funding and Series A. “He’s originally from Pakistan,” said Ali. “We have always looked up to these people. It’s humbling in many ways.”

Ali and Qasim were acquainted with these entrepreneurs when they were learning about business in their home country. Ali wanted to start a social media art agency to help small businesses and nonprofits tell a better story and Qasim did not want to go down the traditional life path set for women in Pakistan: “You can get married or become a teacher,” she said. They eventually partnered to launch a footwear brand called Markhor with a group of local cobblers made possible by a grant they won from P@SHA Social Innovation Fund and from the Y Combinator accelerator program, which they graduated from in 2015. They met Ohanian at the program as well.

After two years of research and exploring the market, they developed the first Atoms shoe, which accumulated a waitlist of more than 39,000 people. The founders are not in a rush to develop more silhouettes. They are developing technology around how people walk, more specifically people that walk on the inside of their feet.

Ali said, “We just launched so we have a lot more to do on the product but we have the right foundation for that.”