Eckhaus Latta found its stride in the accessories realm. 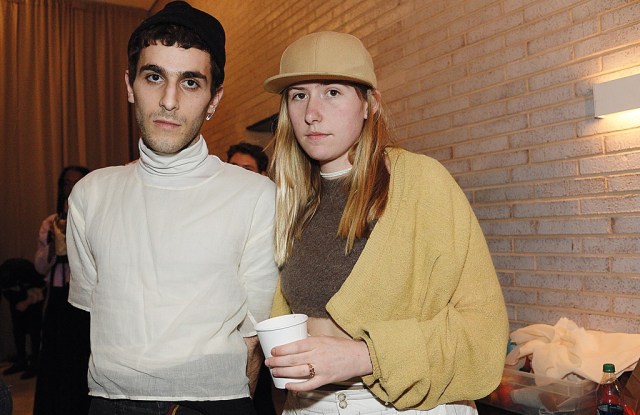 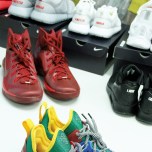 These are the experimental components that, at just seven seasons in, are helping emerging New York ready-to-wear brand Eckhaus Latta find its stride — particularly in the accessories realm. The brainchild of former Rhode Island School of Design classmates Mike Eckhaus and Zoe Latta, the label has established a fringe, underground following — due in part to its ability to express a brand story through shoes, jewelry and miscellaneous art-piece accessories. Their efforts have landed the duo a partnership with Nike iD, which will be unveiled at their runway show Monday.

For the past several seasons, Eckhaus and Latta — who just filed an application for the LVMH Prize — have been churning out a look that melds utilitarianism, pansexuality, streetwear and thrifted silhouettes into a unique, counterculture aesthetic. Their overriding color palette could best be described as Band-Aid-inspired. “In essence, we approach the brand as two fine art students,” said Latta, a former textile design student who operates her own textile-consulting firm on the side. “We really don’t want ‘a girl,’ we don’t want to tell people who they are,” she added of her brand’s interest in promoting individuality.

Eckhaus, a former sculpture student who designed accessories for Marc by Marc Jacobs for more than two years before departing to work on the label with Latta full time, said of his penchant for the unconventional: “I think at the end of the day, neither of us has classical ideas of prettiness; they are never things that interest us so much.”

The label has been staging its shows and presentations with a full accessories story from the beginning, from jewelry (which is often produced in partnership with Latta’s father), to shoes and random art pieces like Eckhaus Latta-scented deodorant. “For us, it’s about creating a world, and the idea of us making clothing and then not having shoes, it was like, ‘How could that happen? You don’t walk around barefoot,’ ” Eckhaus said of the label’s all-hands-in approach. He conceded, though, “Yes, we’ve shown collections barefoot, but there was a logic to that.”

On the accessories docket for fall, Eckhaus and Latta have teamed with Nike to create an “inspired” assortment of basketball sneakers, using the activewear giant’s customizable iD program to produce a portion of its runway shoes. The label is among a small grouping of emerging designers to be chosen for the Nike program’s inaugural season. Fellow emerging American brands Baja East and John Elliott are also participating.

In addition to the sneakers, there will be a heeled clog in pastel shades and pony hair fabrications. While samples still had not arrived from the label’s Spanish manufacturer during a recent studio visit, a digital rendering showed the styles — designed in two heel heights — appearing something like an inclined Dansko clog.

Aligning with the brand’s emphasis on gender “fluidity,” the clogs will be produced for men and women. “Ever since the beginning, there has always been this overlap between genders, especially with the footwear. It’s the same style but for both sexes — we just size it accordingly,” Eckhaus said.

The clogs recall the label’s continued interest in using medical-grade supplies and colors as inspiration. Pills, in particular, have formed an aesthetic baseline for the brand’s range of semifine jewelry. Capsules carved in jade or fashioned of Lucite and suspended on rose gold chains come packaged in branded prescription bottles. Eckhaus earnestly admitted of his design process: “It’s important to me to remember that I’m not our customer. I’m not the person who could afford our clothing.”

While the bicoastal duo declined to reveal sales volume, they said sell-through rates at stockists such as Opening Ceremony and Maryam Nassirzadeh are “really high.” This season they will travel to Paris for their first go at market week in the French capital.

Latta expressed interest in taking on an investor, but said she and Eckhaus are looking to do it in a “smart way.” She summed up their intentions for the season and beyond: “We are definitely a fashion company, but not in a way that I can explain another one that’s like us. We are not defiant to the structures or constructs of fashion, but more interested in engaging in a conversation about how they function.”