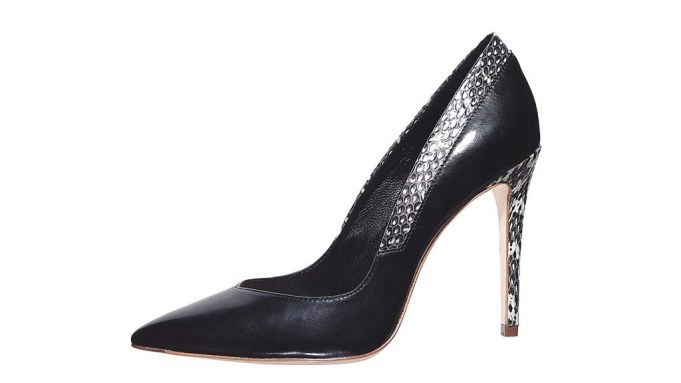 “The goal is not only to expand what we do on a wholesale basis. But [licensed products] will also enhance the shopping experience online and in our stores,” said Bob Galvin, chief executive officer of Elie Tahari Ltd. “Today, non-apparel-related items represent 5 percent or less of sales. Our goal is to have it be 20 to 30 percent of all store sales. You need the product categories to drive that.”

Having an expanded footwear offering, for example, will allow Tahari to expand that business quicker overseas, he said. “As we’re rolling out international shops with partners, nonapparel categories become very important. This will help fuel our growth both domestically and internationally.”

Top priorities for the company are developing the home business — tabletop and bedding — and forging a handbag deal for the Elie Tahari brand. It already has a handbag license for T Tahari and Tahari with Envisage Group. Also high on the wish list is a fragrance.

“That would be one of the biggest opportunities for growth,” said Galvin, noting that the marketing and advertising supporting it, and the great visuals, would boost Tahari’s global presence.

At present, however, no fragrance deals are imminent. “We’re talking to a number of people in the category,” he added.

Men’s has been a growing category, and the firm has inked deals with Peerless Clothing, PVH Corp., Collezione SA and Imperial.

“We have a huge men’s initiative under way in accessories [belts, small leather goods, cuff links]. We do suits, shirts and ties,” said Galvin.

He also noted that the company is looking aggressively into kids’ apparel and footwear, and is considering women’s swimwear, women’s loungewear and activewear. The firm recently signed deals with Imperial for men’s and women’s cold weather hats, gloves and scarves, as well as men’s underwear.

For spring, Tahari will launch women’s and men’s sunglasses with Colors in Optics.

Asked why they haven’t been more aggressive with licensing over the past 40 years and are becoming more so now, Galvin said it’s important to find the best partners out there, that not only have great quality, but get Tahari’s aesthetic and design and understand the DNA of the brand.

“It’s easy to do a lot of licensing deals. Everyone that I pick up the phone and call would love to become part of the Elie Tahari family. We’re just much more selective in terms of who we invite to be part of the family,” said Galvin. “Elie loves product and loves having great product that represents him in the marketplace. Whether sunglasses or a belt, anything that has his name attached to it has to be Elie Tahari. If his name is out there, it has to be wonderful.”

“The right category expert is able to interpret [Tahari’s aesthetic] into that product category so it’s on-brand. And then it comes back to us for approval. Nothing goes out without Elie’s OK,” said Galvin.

Rick Paterno, ceo of Highline United, the women’s footwear licensee for all three brands, said the footwear labels have been doing well. The collections “take their design cues from Elie.”

The Elie Tahari label is sold in stores such as Saks Fifth Avenue, Bloomingdale’s and Neiman Marcus, and the Tahari footwear brand — the largest piece of the business — is geared to stores such as Macy’s, Lord & Taylor and Belk. Paterno said Highline recently presented the T Tahari collection to Nordstrom.

Paterno said the color and material direction is coordinated with Tahari’s sportswear collections. Historically, the Elie Tahari footwear line was “pretty dressy and sophisticated, but now we’ve expanded the casual and weekend collection with more sneakers, sport casuals and flats,” he said.

“It performs well. We just came off FFANY [the Fashion Footwear Association of New York show], and the reaction to the collection was outstanding. We’ve had two good shows back to back,” said Paterno.

“We were always fascinated by Elie’s exceptional designs and the way he interprets fashion. It’s a great fit for us,” said Hutton. “We are a design house for eyewear, and we’re both timeless, sophisticated and use fresh styling of the moment that can last for years to come.”

She described the Elie Tahari woman as someone “who has a sense of her own creativity, has a great sense of style and is diverse in what she likes. She’s very sophisticated, timeless and wants to be of the moment.”

Elie Tahari eyewear and sunglasses will be all hand-made of European acetates and European hinging. They will have a discrete logo, reflective of the Tahari brand, she said. As for design, she said, “They would have a modern twist on the retro infusion in eyewear today.”

Mann believes there are numerous synergies with the ready-to-wear collection. He said Tahari designs a lot of nuanced colors and shades “and really wonderful print designs.” He said his own design team works collaboratively with Tahari’s team.

Betsy Ferraro, president of better women’s outerwear at S. Rothschild & Co., said her company makes every type of outerwear for its Elie Tahari, T Tahari and Tahari collections, including leather, wool, down, fake fur and puffer coats and jackets.

“We do all classifications,” she said, from sporty to dressy. “The Elie Tahari customer isn’t ubercasual. It’s a lifestyle brand. We design for every occasion where she would need a coat,” said Ferraro. “It’s very much the DNA of Elie Tahari. It has a very easy-to-understand aesthetic. As his line has evolved, we tailor that to our market. Elie has a very good eye. He’ll give us a general feeling, such as the colors, silhouettes and overall spirit, and we try and complement his collection.”

Elie Tahari outerwear wholesales from $120 to $400, depending on the classification. T Tahari wholesales from $65 to $150, while Tahari coats go from $50 to $135. “We try to keep the same aesthetic across the board. The customer who loves Elie Tahari should be able to get it at any level,” she said.

She added Tahari has been consistent for 40 years.

“He’s one of the first people to understand branding and gives the customer what she wants. Elie does a lot of in-store events and he’s got quite a following. He made a name for himself and delivers consistent, fashionable and on-trend outerwear,” said Ferraro.

Describing the essence of the Elie Tahari brand and what the team hopes their products convey, Galvin summed it up this way: “Elie’s all about femininity. Whatever the product is about, it has to exude femininity. It’s not a harsh leather, it’s a soft leather.”

He added that from a design perspective, Tahari loves architecture and fit, and there’s a richness to his product.

“You look at the clothing and the way Elie is able to mix materials and have things come together that creates a ‘wow’ factor. He’s also known for great prints,” Galvin said. “I think material innovation and design direction is all about Elie.”