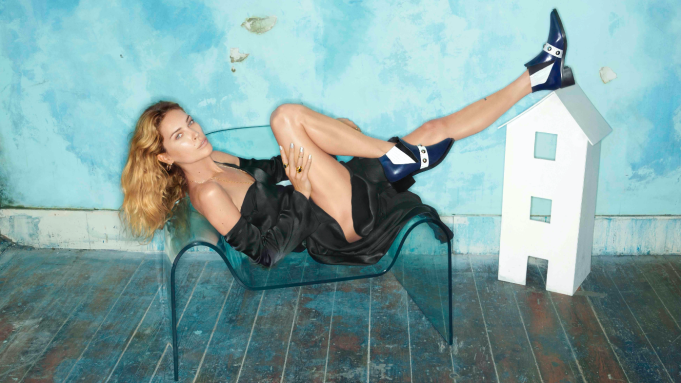 LONDON — Model Erin Wasson has loaned her face — and creative talents — to an ad campaign for the new British footwear brand that aims to bridge the gap between high street and high-end women’s footwear.

Inspired by street style trends and global cultures, Attribute uses Italian leathers and exotic skins in bold designs. The launch collection, available at attribute.london and at a pop-up store on Redchurch Street in east London, is being sold alongside capsule collections of handbags and shearling jackets and bombers.

The business model is direct-to-consumer and there are no plans to wholesale.

Wasson said that when she was approached by Attribute last year, she was attracted to the inclusive mentality of the brand. “I like that they are a new brand and at the early stages of crafting what they will look and feel like,” she said. “I like that they are taking on the shoe giants by removing the wholesale margin from the cost of the shoes and retailing directly to a consumer, it’s brave.”

She helped design the Patti boots, pointed-toe ankle boots with a studded front strap and colorblocks, and said her personal style shines through.

“My style has always been the same idea: very free, easy, relaxed and slightly androgynous. I think it came with being from Texas. It’s a laid-back kind of place. I’ve never been a girly girl, never drawn to things that are fussy. And the older I get, the more basic I get. I look at pictures of the stuff I wore five years ago and am like, ‘Wow, I was really going there.'”

Other designs, including bags and court shoes, feature hand painting by the artist Mark McDonald, who has previously collaborated with Comme des Garçons and Alexander McQueen.

The brand, founded and backed by a collective of luxury and high street professionals in areas such as production, fashion and graphic design, is embracing a “see-now-buy-now-wear-now” consumer-focused sales model. New footwear collections will drop each month, allowing the brand to maintain a design-led philosophy and react quickly to trends.

“The market is saturated at the entry and luxury levels,” the brand said in its mission statement, adding the aim is to appeal to consumers who have “outgrown the high-street, but find designer luxury brands price-prohibitive.

“We strongly believe there is a real gap in the market for a premium brand and design studio that creates its own trends, is strong in its beliefs, and offers its consumers quality, a strong brand identity and an accessible price.”

The debut collection, “Let Us Dream,” was inspired by Eighties punk rock icons and the glamour of the Nineties supermodels, and consists of nine shoe styles including sandals, mules and boots. There are also five bag shapes and six jackets.

Key styles include the Alice sandal, a chunky style with a buckled ankle strap and domed stud details, the elastic-sided Patti boot, and the Blondie bucket bag.

Studs feature strongly throughout all the designs, and there are hints of leopard. Cracked leather, meanwhile, hints at a rock ‘n’ roll attitude.

The brand ships globally from its site, and plans to continue opening pop-up stores in London, New York, Los Angeles and Tokyo, with plans for permanent flagship stores farther down the road. Prices range from $250 for black mules to $730 for a pair of hand-painted shoes.