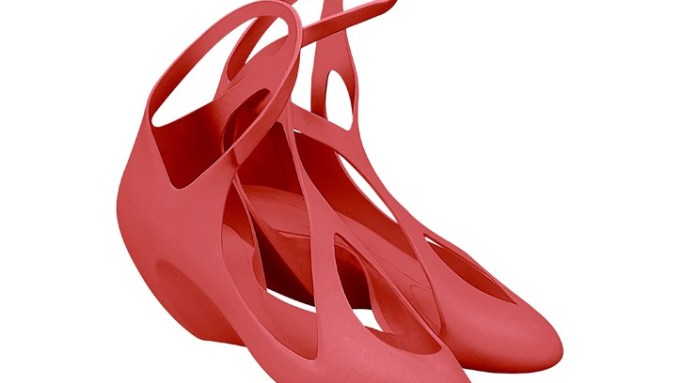 IF THE SHOE FITS: Architect Zaha Hadid is exploring new mediums, including fashion. Hadid was commissioned by Brazilian footwear brand Melissa, known for its plastic shoes, to create limited edition styles from the synthetic. The shoe evokes Hadid’s buildings, with fluid lines as straps and a rounded toe.

“The project with Melissa is about creating something fun and new — something that feels good,” Hadid said. “The design engages with the fluid organic contours of the body and the asymmetric quality conveys an inherent sense of movement, evoking a continuous transformation. We designed the shoes to emerge from the ground and climb up the foot and leg with a soft elegant movement. There is an implicit sense of lightness that blurs the boundary between body and object.”

The Melissa + Zaha Hadid Collection will hit stores such as Opening Ceremony in November and sell for about $350.

A MAN’S TAKE: M.C.L. designer Matthew Campbell Laurenza’s first passion is women’s jewelry, but he has a soft spot for his own gender.

“So much of men’s jewelry is very nondescript and really does not allow men to represent too much diversity in their wardrobe,” Campbell said. “I had noticed also that I was receiving requests for men’s from my female clients for their husbands, as well as requests from men who had seen the women’s product lines, so I knew that the market had interest for something new.”

The M.C.L. men’s collection, which hit Bergdorf Goodman Men’s store this month, incorporates blackened silver cuff links with brightly colored enamel and a money clip embossed and enameled to look like an exotic skin. There also are gem-studded charms in the shapes of crosses, shields and the like.

“For men I wanted to capture the excitement of getting a new toy and I decided to look back into my past and use toys as the basic inspiration for the collection,” Laurenza said.

MR. INCREDIBLE: The Incredibles by Harry Winston, a collection of 11 statement pieces inspired by the jewelry house’s archives, is taking a world tour. The pieces already have traveled to the firm’s London boutique. They include a glittering necklace set entirely with 77 round and marquise diamonds, with a 12-carat marquise diamond and a delicate diamond necklace set with a rare padparadscha sapphire at its center — a 37.92-carat stone with a pinkish-orange color.

“You could sit for a long time and look at that stone,” said Susy Korb, creative director of Harry Winston, adding that many of the pieces are inspired by the jewelry designer AV Shinde’s creations and sketches for the house from the Fifties and Sixties. After London, the exhibit goes to Hawaii, New York, Paris and Costa Mesa, Calif.

MOM’S INSPIRATION: Jane Seymour exerts as much creativity on screen as she does on canvas. The actress, who has painted for the last 17 years and has had exhibits in museums around the world, recently took her art to the next level when she painted a motif of interlocking hearts that are open at each end. Inspired by her mother. who recently died, she was moved to create a diamond pendant using the same shape.

“My mother always told me that when life is tough, help someone else and they’ll help you,” Seymour said of the Open Hearts motif.

After wearing her design on “Dancing With the Stars,” Kay Jewelers approached Seymour to do a collection. The Open Hearts by Jane Seymour collection offers the motif in myriad styles, such as a sterling silver ring or a diamond earring. Prices range from $39 for a silver piece to $1,400 for a gold necklace with diamonds.

“I never tried to do this, it just happened to me,” said the actress, whose next film, “Dear Prudence,” will air soon on the Hallmark channel. The line is available on kay.com and at select Kay Jewelers stores.

SNAP, CRACKLE AND POP: Selfridges in London is showcasing a selection of handbags and clutch purses from Bulgari’s fall collection in a space in its ground-floor accessories hall. The area carries a different label’s accessories every two months. The Bulgari collection includes heavily beaded clutch bags and will retail for as much as 3,500 pounds, or $6,900. All the Bulgari pieces sold in the space will be exclusive to Selfridges for their two months in the store.

TINSLEY TOWN: As if the public won’t get enough of Tinsley Mortimer with her upcoming stint on “Gossip Girl” and her real-life portrayal of gal-about-town, now fans can check on her latest doings on samanthathavasausa.com, the Web site for the Japan-based accessories firm for which Mortimer designs a capsule collection. Having launched this month, the site features not only the latest styles and sales, but also an “About Tinsley Mortimer” section.

“We wanted to create a primary source of information for our U.S. customers, informing consumers on the brand, our continuous relationship with Tinsley Mortimer and our wide assortment of products,” said Tobias Buschmann, director of U.S. operations for Samantha Thavasa.