Kooba will launch footwear on Aug. 5 at the FFANY New York Shoe Expo. 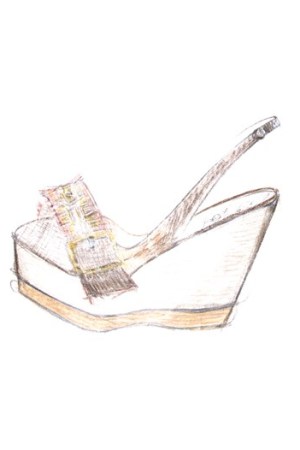 SHOE BIZ: Kooba will launch footwear on Aug. 5 at the FFANY New York Shoe Expo. The collection will feature platforms, flats and gladiator sandals with a similar look to the firm’s classic hobo bags and totes. The shoes will retail from $225 to $450 and will be offered at spring market to the same distribution channels as the bags, including high-end department and specialty stores. “I’ve always been obsessed with shoes, so after building a successful handbag business, it just seemed like a natural next step to translate our unique mix of rich and interesting leathers, attention to detail, and an effortlessly chic sensibility into footwear,” said Abbe Held, founder and creative director at Kooba.

VINTAGE SHOPPING: Yoox.com is partnering with jewelry collector and historian Deanna Farneti Cera on a series of themed sales taken from Cera’s collection of vintage costume jewelry. The first sale later this month will focus on “Revisiting the ’80s” and will include 20 pieces from the era, such as a Karl Lagerfeld by Ugo Correani Plexiglass and metal ruffle cuff and Yves Saint Laurent rectangular wooden earrings. Yoox.com will feature a sale every two to three months. Last week, the Bologna, Italy-based e-tailer said it was preparing for an initial public offering and could list before yearend.

DIMASSO AND DEVI: Accessories firm Devi Kroell has tapped Tony DiMasso as president and chief operating officer, a new post. DiMasso has joined the company after five years as chief operating officer at Jimmy Choo, where he was instrumental in expanding the brand’s U.S. presence. Before that, he was the chief operating officer of Diesel USA. “[Kroell] has an international presence and a lot of unexplored potential,” said DiMasso. “I am looking forward to a fantastic partnership with Devi as we look to take the brand to the next level of growth and drive its retail and wholesale operations.” DiMasso reports to Devi Kroell, designer and chief executive officer.

MERCI GABLONZ: Parisian concept store Merci has unveiled a treasure trove of colorful vintage rhinestone jewelry crafted by the women of the Czechoslovakian village of Gablonz, where Daniel Swarovski began his glittering career. The collection’s previous owner, a Gablonz native, was selling several pieces at a flea market in Vienna where it was spotted by Merci’s artistic director, Daniel Rozensztroch, who bought the entire stock, until then stored in a box in a garage. Comprising 70 brooches, bracelets and holiday decorations, made from cut glass and mercury glass beads, the pieces date back to between 1900 and 1930. Designs take inspiration from the animal kingdom, be it an elephant brooch or a lobster tree decoration, or more playful themes, such as a teddy bear, or a Mickey Mouse, proving the character was already a cultural phenomenon in Eastern Europe. Pieces are 300 euros, or $420 each, and go on sale in September.

DIVA-MADE SHADES: The House of Deréon label, cofounded by Beyoncé Knowles and mother Tina Knowles, signed a licensing agreement with Allure Eyewear to produce an eyewear collection under the brand. The initial collection of Deréon eyewear consists of optical frames and sunglasses in bold colors and oversize, glamorous silhouettes. It will be sold at major department and specialty stores around the country and retails from $40 to $200.

“Sunglasses and eyewear add an incredible amount of appeal and they are truly an essential accessory for any look,” Tina Knowles said.