Hot fashion brands and fast-fashion players have a leg up on the middle market, observers say.

By Natalie Theodosi
with contributions from Misty White Sidell
on August 18, 2017
View Slideshow 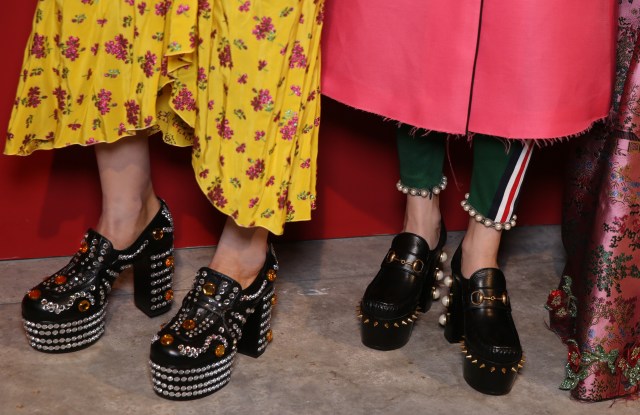 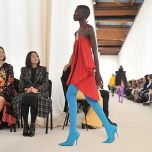 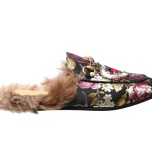 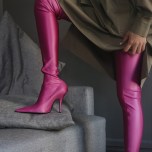 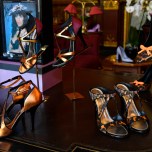 LONDON — The ground is shifting under the soles of the footwear industry as customers gravitate to extremes, spending their money on fast-fashion or on big-name, long-established pure players such as Manolo Blahnik and hot brands like Gucci.

The middle market, populated by the likes of Michael Kors and The Kooples, meanwhile, is being squeezed from both ends.

Jimmy Choo’s $1.35 billion sale price may have left many slack-jawed, but it was indicative of the trend: Choo, a long-established pure player, will give Michael Kors the opportunity to diversify its product offer and move upmarket in an increasingly polarized environment.

“Players at both ends of the market are better positioned: Brands like Zara and H&M are offering compelling design and price points while controlling their own buys, discounting, etc.,” said Coye Nokes, partner at OC&C Strategy Consultant’s New York office. “At the other end of the market, luxury brands like Gucci with its own distribution, either stores or concessions, have more control over merchandising and pricing — and have had significant success with their recent ranges.”

Pedro Aguilar Domínguez, industry analyst at Euromonitor International, personal accessories and eyewear, agrees. Worldwide, both the high end and the low end are at an advantage because they rely on their own retail networks — and powerful social media campaigns — to capture consumers, he said.

Retailers concur that the big brands’ footwear firepower cannot be underestimated. “Balenciaga and Gucci are selling like hotcakes and it’s a similar situation with Vetements,” said Ida Petersson, women’s buying director at London’s Browns. “For us, it’s almost like a trickle-down effect from what’s hot in ready-to-wear.”

Petersson said she believes that in the age of social media and the constant quest for exposure, rtw labels have a great advantage because of their established communications channels fanned by catwalk shows and influencers. They’re able to engage with the consumer in a number of ways and create a buzz around a variety of products, including shoes.

“The Gucci loafer became an ‘It’ shoe, so did the Vetements boots and now Balenciaga’s sock-boots are also turning into an ‘It’ item,” said Natalie Kingham, Matchesfashion.com’s buying director. Those styles are some of the most popular at the retailer — and garnering the same sort of attention as ‘It’ bags did 10 years ago.

Other buzzy rtw names that have been successfully exploring the possibilities of footwear include Off-White with its striped and logo trainers; Proenza Schouler with its metallic block-heeled pumps, and Altuzarra, which is known for feminine, lace-up sandals.

Joseph Altuzarra said he believes fashion brands are finding success because they are building on past styles in a much more consistent way, and not abandoning what they have done prior.

“We see that across the board with the brands that are performing really well like Gucci and Balenciaga. There is sort of a consistent messaging. It’s something we’ve really concentrated on in the last few years, building a very consistent narrative,” Altuzarra said.

Off-White, Jacquemus and Attico are all new to the footwear category, and Petersson said seeing assortments develop based on its customers’ initial response “has been amazing.”

There’s another dynamic at work, too: The bigger rtw brands have also begun to compete on price, viewing certain styles as an entry point into the luxury looks they’re peddling.

A pair of Gucci espadrilles can cost 255 pounds, while prices for loafers start at 305 pounds. Both cost about the same as a pair of sneakers from Golden Goose, Lanvin or Pierre Hardy.

“Shoe prices a couple of years ago were threatening to become extortionate, which led to a deliberate restructuring from some of the bigger brands,” said Petersson.

According to Euromonitor, the retail value of the worldwide women’s designer footwear market was $17.65 billion in 2016. It is set to grow about 5.3 percent annually until 2021, driven mostly by tourism and high-income local customers.

Moda Operandi, which has been growing its accessories offer across all categories in the past year, has also seen a spike in consumers’ interest for footwear made by hot rtw brands, and has tailored its trunk shows around that trend.

“We have partnered with key brands such as Proenza Schouler, No. 21 and Rochas to launch a separate accessories trunk show so that pieces can truly stand alongside the rtw collections,” said Deborah Nicodemus, chief executive officer of Moda Operandi. “The client can see the pieces separately, and the format has proven to be highly successful.”

While the big pure players, such as Choo, Christian Louboutin, Gianvito Rossi and Manolo Blahnik continue to drive sales from their classic shapes and evergreen styles, they’re also competing on the customization front.

Nicodemus said an exclusive capsule collection by Louboutin, where customers could choose the silhouette, materials and embellishments on the shoes, was a hit on Moda.

“The attention to detail and personalization delivered extraordinary results. Our client is willing to pay for quality and unique product, like the $3,000 Christian Louboutin shoes,” she said.

Where, then, does they new dynamics leave the smaller, high-end brands, the ones that don’t have a hot rtw label behind them or a big name like Blahnik, Louboutin or Choo?

A pair of Zodiac-themed shoes from a capsule designed by Christian Louboutin exclusively for Moda Operandi.

According to a luxury retail source, growth has been more challenging for the smaller brands including Charlotte Olympia and Tabitha Simmons, who are competing with the rtw brands on price and on go-to, evergreen styles, such as a recognizable loafer, bow pump, a stiletto — or in the case of Louboutin, a red sole. “For pure shoe players, having a true brand identity is key to giving the customers a reason to buy,” said Cassie Smart, buying manager for footwear and bags at Matchesfashion.com.

According to Lisa Aiken, retail fashion director at Net-a-porter Group, shopping today is “less about brand loyalty and more about individual cult items — this is true across all categories, not just footwear. Our customers want statement pieces, hence why we’ve seen such success from the likes of Vetements.”

Earlier this summer, Charlotte Olympia sought to confront that challenge, quietly selling a majority stake to Onward Luxury Group, an Italy-based fashion manufacturer and distributor with expertise in apparel and shoes, for an undisclosed sum.

The brand, which was founded in 2008, said it wanted to expand its distribution footprint and manufacturing capabilities and to “accelerate new growth initiatives” for the business, which had been seeking strategic investment for a while.

Another footwear segment under pressure is the middle market, which in the U.S. in particular, has fallen victim to the crisis among the U.S. department stores.

Nokes of OC&C Strategy said brands that rely on wholesale channels, rather than their own store networks, are at a particular disadvantage right now.

“Distributing through the wholesale channels means that brands have less control over the prices, styles and merchandising. With department stores struggling, many brands that rely on them as a route to market are struggling as well,” said Nokes.

In the U.S., she said the “department store issue is having a disproportionate effect on the midmarket brands, as many do not own their own retail channels. These brands are often discounted heavily and are subject to pressure from buyers to adjust their ranges. All of these factors can ultimately damage the brands and impact the consumers’ perception and their willingness to pay a premium over lower priced brands.”

In the U.S., the overall luxury market is $100 billion, while luxury footwear comprises abound 15 to 20 percent of that, and is growing at 2 to 3 percent per year, according to A.T. Kearney.

The challenges in the U.S. are myriad. Not only are there too many stores, but more people are also buying their footwear on the Internet.

“You can order a few different sizes. With free returns and everything they do now, it’s changed how people experience buying shoes,” said the consultant Robert Burke.

“I think there is an interesting fragmentation of the retail market, so women are finding different things for different occasions in different settings — whether it be department stores, specialty boutiques, or online stores. It depends on the kind on customer you are and the kind of service you are expecting,” he explained.

A London-based industry consultant who asked not to be named said there’s “a lot of misery” around the state of the American department store due to the impact of Amazon and online generally, but the big, international U.K. stores such as Harrods and Selfridges are expanding their footwear departments.

According to Selfridges, the women’s and men’s Shoe Galleries, which carry brands with a variety of price points, have “exceeded expectations.” Last year, Selfridges also rolled out a new shoe department at its Manchester Exchange store.

In London, Liberty is set to unveil its new men’s wear department where the footwear space is about 40 percent larger than before, while Harrods and Selfridges are looking to expand their already sprawling spaces.

So, what of those small, pure-play footwear designers who are just breaking into the business? With so many headwinds from fast fashion and the big luxury names, is it worth the effort?

Fabrizio Viti, who launched his namesake label last year, would reply with an enthusiastic “yes,” as would the Turkish-born, London-based designer Dora Teymur.

Viti, who draws on 20 years’ experience working as a footwear designer and who is also Louis Vuitton’s women’s shoe style director, has quickly made a name with his whimsical, daisy-embellished shoes.

“There was a need for something that made girls feel like they’re in a fairy tale, something far from drama, red carpet — and very high heels. My heels are about 6 centimeters high,” said Viti.

Viti has built in a broad range of prices, from 550 pounds to 980 pounds, but said his top-end, most elaborate creations are the most popular.

“Most of the time the work on the shoes is quite intense and long and complicated, and that makes the price go up. We also use high-quality materials that I don’t want to compromise and those choices come with a certain price tag. We sell more of the expensive product because my woman doesn’t really need another pair of shoes,” Viti said.

The Turkish designer Teymur, who is also playing in the high-end space, has torn a page out of the big luxury brands’ handbook. His prices range from 360 pounds for a pair of loafers to 2,000 pounds for exotic skin pieces, and he also customizes his designs, on Farfetch.com.

Petersson of Browns said the store is selling “as many loafers from him as we are from Gucci.”

The designer, best known for its graphic hardware, backless mules and sculptural heels, added that one of the biggest challenges he’s facing now is how to evolve beyond his signature silhouettes.

“You are often encouraged to continue doing the same thing, but after a while you could end up as a product maker — and not a designer.”