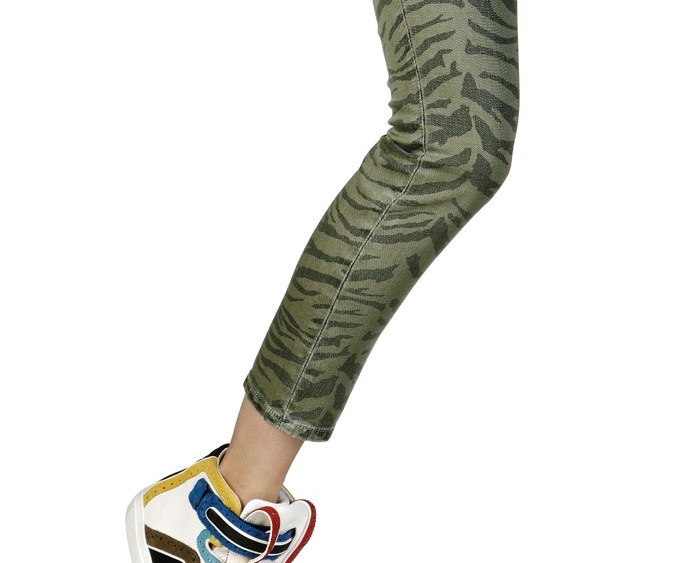 It’s been 30-plus years since sneakers as a fashion statement got their improbable start when the New York City transit strike of 1980 had legions of career women hoofing it to work with broad-shouldered suits on their backs and high-tops on their feet. Little did they know then, those women were creating a look that would last — even if it was a dubious look at best — and one that has reemerged ever stronger in the designer market, where high-tops are kicking ballerina flats off their casual-chic perch.

“The high-top trend has been bubbling up for some time, and, as trends go, it usually takes a few seasons for them to take hold,” says Holli Rogers, fashion director of Net-a-porter.com. “I think it’s most prevalent now, since this year we have seen a resurgence of trends from the late Eighties/early Nineties and the high-top sneaker is certainly associated with that excitement.”

All the major accessories houses have gotten in on the look, as Rogers named Christian Louboutin, Giuseppe Zanotti, Lanvin, Yves Saint Laurent, Miu Miu, Mulberry and the original Chuck Taylor high-top by Converse as top sellers. The more distinctive, playful and counterintuitive, as in the case of Isabel Marant’s Bekket sneaker with a hidden wedge (another Net-a-porter bestseller), the better. “I’ve always found wedge sneakers very unattractive,” says Marant, who drew on her own teenager years — when she would put a cork sole inside her trainers to appear taller — for inspiration. “To me, it’s all about the style and attitude, so when I created mine, the challenge was to keep a real balance between a nice aesthetic and the comfort of a flat sneaker.” Added bonus? “They also make women look taller!” she says.

High-tops, as opposed to low-tops, can also alter the look of the shoe’s proportion, creating a stronger silhouette. “It’s more flattering because of the volume,” says Pierre Hardy, whose multicolored Dapperama high-top with a fringed tongue is being distributed in limited edition in June. “It also maybe comes from the Eighties and is a youthful reminder of the beginning of hip-hop — this funny, crazy girl with nice energy.”

Ruthie Davis, whose studded high-tops have been picked up by 10 Corso Como, sees the style as an edgy alternative to ballet flats. “The ballerina is somewhat limited because there’s only so much you can do,” she says. “I’ve always like a sneaker because there’s a lot of surface area to add design. And there’s something about a sneaker that adds a playfulness and a little bit of street. It says, ‘I’m not too serious.’ ” Davis actually comes from a sneaker background, having clocked time at Reebok before starting her own line. “It used to be that Puma, Adidas and Converse designed for the cool girl and the designer sneaker was Chanel, Prada and Gucci, but they were for an older customer,” adds Davis. “I always used to say that there’s a huge market for sneakers from a designer label that’s younger, hipper, cooler — that’s the new area. The same people I compete with in heels are doing sneakers.”

Alejandro Ingelmo added sneakers to his line in 2007 and reports that the interest at retail has picked up considerably over the course of the last season. “My inspiration comes from the streets of New York,” he says. “For my girls, it’s either a pair of flats or a pair of cool kicks. And for a while, women were afraid because they felt sneakers were too masculine or not chic enough. But it’s quite the opposite. It’s now more chic to wear kicks.”