The shoes are designed to walk the line between performance and fashion.

The men's model of the Courser.

Sneakerheads historically don’t shy away from high retail prices. And that’s just what Michael Petry and Laurie Spiro are banking on as they launch Courser, a sneaker they’ve dubbed “hyper-luxe” — a shoe that combines performance and luxury and retails for $825.

The married couple has a rich résumé in the footwear business, and even met when they were working at different companies in the field. Petry, a former professional soccer player, has helped grow the footwear business at brands such as Adidas, Ralph Lauren, Prada and The Frye Company. His wife was also at Ralph Lauren, working in-house with the licensees including Reebok on the brand’s footwear. She also worked for Cole Haan.

“We talked for a number of years about starting our own business,” Petry said.

Now is the right time, they believe, to take their combined skills and create a new kind of shoe. “It’s a moment in time where we take the sum of everything we’ve learned in a space where we saw opportunity.” His wife added: “We are making the absolutely best performance sneaker we could. Most people design to a price point, but when you don’t think of what it costs, it’s liberating.” 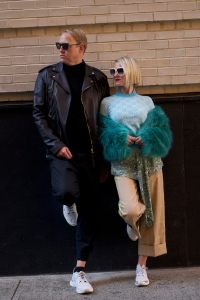 Courser’s sneakers are handmade in Italy from nubuck leather backed with what they say is “the most durable, unrippable fiber on earth.” The brand’s proprietary 100 percent carbon-fiber plate offers better biomechanics, and a reduced injury risk​, they said, and the midsole/outsole uses a compound that provides a cushioned ride with virtually no compression. Each shoe will sit on the last for 24 hours, even more than bespoke footwear, and in contrast to the 10 to 12 minutes for most mass-produced models.

In addition, they said, unlike most running shoes that perform best when they rest and rebound for at least 24 hours, Courser’s sneakers don’t need to rest. They also last 2,500 miles rather than the 300 to 500 miles of most other running shoes, meaning they don’t need to be replaced as often.

The footwear market is broken into either performance or luxury and the two don’t intersect like they do in watches or automobiles. “So why not shoes?” Petry said.

“Courser was founded out of our desire to create a new category for footwear — hyper-luxe. We sought out and developed the best technical materials in the world and combined them with beautiful design and the ultimate Italian craftsmanship,” Petry added. “Much like the world’s legendary super cars, Coursers are engineered for the highest levels of pleasure and performance.”

The shoes will be sold direct-to-consumer initially on the Courserworld.com web site beginning today. The web site also tells the story of how the shoes are made and is staffed by live customer service agents. “That’s one of the best ways we can tell our story,” he said. “Performance brands want you to dig in and learn.”

Petry and Spiro realize the shoes are expensive and so will appeal to a small segment of the population. But that’s OK. “Not everybody wants to buy a Ferrari or a Porsche,” Petry said.