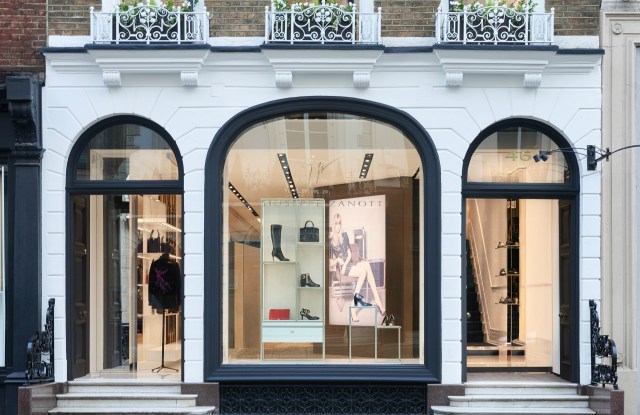 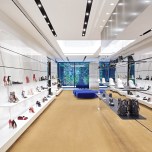 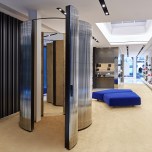 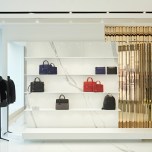 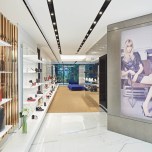 LONDON — In or out of the European Union, London remains key for Giuseppe Zanotti, the Italian footwear designer who has opened his largest flagship in the former Donna Karan space on Conduit Street near Oxford Circus, a thoroughfare that’s fast becoming a nexus of international luxury brands.

Giuseppe Zanotti Design has taken over all three floors of a historic Georgian building for the first London store that houses all of the brand’s glamorous, high-sparkle collections: Women’s, men’s, children’s, jewelry, bags and ready-to-wear. There’s even a dedicated bridal section in the 2,300 square feet of selling space.

Zanotti has two other stores in London, one on Sloane Street that sells women’s and another in Belgravia focused on men’s.

In an interview, the designer said 95 percent of his sales are international, and calls London “an important crossroads, with clients from China, India, the Middle East. And we sell very well in England generally. We needed the visibility, the framework for telling our story. We’re an independent brand — and the designer is still alive!” said the jovial Zanotti from behind a pair of round glasses with thick black rims.

He added that while the weak pound happens to be a boon now, the store has been in the works for two years and would have opened regardless of the Brexit referendum result.

The brand, which counts the private equity firm L Catterton as a minority investor, has recently opened its first directly operated Moscow store. It already has three franchises in the Russian capital.

Giuseppe Zanotti Design will expand next in Asia, with its first boutique launch in Vietnam in December, and further openings in Tokyo and Singapore in the first half of 2017. The label has approximately 100 stores globally, and sells in 75 countries.

The London unit is bright with clean lines and a contrasting color palette of electric blue, dark gold and shiny metallic surfaces. Walls and floors are clad in white boiserie and marble, with brass details.

Features include mirrored brass bars on one wall, and a silvery, cylindrical dressing room on the ground floor.

The front of the boutique has a large bay window overlooking Conduit Street, while the green garden space (also a part of the former Donna Karan store) at the back will be open to customers.

Women’s wear, including a capsule collection of hand-painted boots and bags, is stocked on the ground floor, while upstairs is dedicated to men’s wear.

Zanotti said that while the business has changed considerably — and become more challenging — since he started in the Nineties, the important thing is to remain flexible.

“Business changes and you have to keep thinking how to change, how to be exciting, and still remain relevant to your brand codes. Today, fashion is no longer about the runway; sport has become fashion, and low heels can be feminine and sexy.”

Zanotti is also moving ahead with his celebrity collaborations, and plans to launch Giuseppe for Jennifer Lopez, a new footwear capsule collection designed with the American singer, in January with Neiman Marcus in L.A.

The limited-edition lineup features six styles, with prices ranging from $795 to $2,995. It will be available in select Giuseppe Zanotti Design stores, on giuseppezanottidesign.com, and at retailers including Saks Fifth Avenue, Neiman Marcus, Bergdorf Goodman and Nordstrom.

Zanotti has also worked with Kanye West, Zayn Malik and G-Dragon, the South Korean singer. He said he loves working with musicians, and finds them inspirational.

The business has overcome a series of challenges this year. The U.S. is the brand’s biggest market, generating about one-third of sales, and Eugenio Morselli, the chief executive officer, said it hasn’t been an easy year. He said the U.S. department stores’ sluggish performance and the upcoming presidential election have both dented sales. He also said that import tariffs imposed by countries such as China and Japan are also weighing on sales.

The brand continues to grow, although not as fast as in past years, which were notching 40 percent increases. Morselli said that this year growth will be around 7 percent with sales of about 172 million euros, or $187 million. Growth will be in the high-single digits next year and the brand will continue to meet its targets, he added. The brand’s fiscal year ends on Oct. 30.

Online, Morselli added, will be a great driver of future growth, via the brand’s own e-commerce and also through sites such as saksfifthavenue.com and neimanmarcus.com.

“The market is unstable and the best we can do is to overcome those obstacles and build the framework for a future when things are better, and the London store is a true showcase for the brand,” Zanotti said.