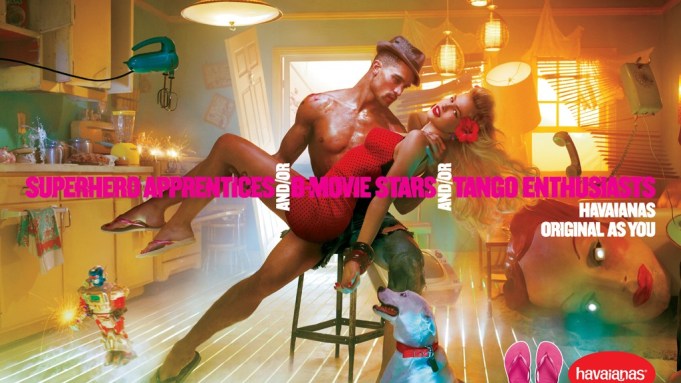 Havaianas’ iconic flip-flop is about to hit the half-century mark.

The brand, which has been available in the U.S. for less than a decade, marks its birthday as June 14, 1962 — the day the intellectual property patent on its “Original” rubber flip-flop style was filed, when the first pair was designed in São Paulo, Brazil.

The company plans local celebrations all over the world come June. In the U.S., various programs and events with retail partners will take place, along with a slew of online promotions.

But the biggest initiative comes from the product perspective, said Afonso Sugiyama, president of Alpargatas USA Inc., the American subsidiary of Alpargatas SA, Havaianas’ parent. In an effort to “give back to the people who helped build the brand,” the company produced 50,000 pairs of flip-flops inspired by the “Original” model. Each limited edition pair, priced at $28, has a white footbed with a contrasting, colorful strap (this was before monochromatic styles arrived in the mid-Nineties), and all proceeds will be donated to UNICEF.

“Havaianas are more popular than Coca-Cola in Brazil. They’re everywhere. We’ve done studies, and the brand awareness is 100 percent, so literally everyone in Brazil knows about the brand.”

To give this sweeping statement some scope, the shoes are carried in about 2,000 doors in the U.S., but in nearly 100,000 in its native country, where they’re also manufactured. Brazil-based Alpargatas — the 105-year-old publicly traded company that owns eight brands, including Topper (Sugiyama likens it to Reebok in the U.S.) — is the largest footwear company in South America.

Sugiyama maintains that the company overall has seen 16 percent year-on-year growth since 2008 and sales for last year reached $1.4 billion. And although he would not give an exact amount for Havaianas’ volume, he said its revenues make up a large percentage of Alpargatas’ overall sales. For the U.S., Havaianas sales for the first quarter of 2012 are up 35 percent from the same time last year. The brand sells more than 200 million pairs a year.

The brand began as a commodity item — a simple, inexpensive shoe that was seen as the first option to not walking barefoot. For 32 years, the product range consisted of just a single style available in five colors, but starting in 1994, the company started expanding its offerings — and changing its image. Now, more than 80 styles exist in more than 400 color options.

“The Original is still sold in Brazil and is one of the top sellers there. The brand didn’t abandon its origin as footwear for the masses, it just layered on top of that with other fashion items,” Sugiyama said, noting that the most popular style today is the Slim, a more contoured, delicate version of the classic style. “In the U.S., people are comfortable wearing Havaianas as casual footwear with their dresses and summer clothing. It’s not something they only wear to the beach.”

At about the same time Havaianas began to increase its assortment, a greater focus was placed on advertising and molding it into a global brand. Opening Ceremony started carrying its product in the U.S. in 2003. The company opened its U.S. headquarters in New York in 2007, followed by offices in Spain, England, Italy and France a year later.

In the U.S., Sugiyama said product is more connected to fashion trends — and special collections adorned with crystals and other embellishments launched in 2008, a response to requests from American customers that has since seen global success as well. These styles range from about $40 to $80 — in some cases more than double the retail price of the $26 Slim — and are sold at department stores such as Nordstrom and Bloomingdale’s. For spring, neon straps were incorporated into the collection to mirror current trends.

“For Brazilians, it’s been around for 50 years, so we don’t need to talk about Brazilian spirits there; they understand it naturally,” Sugiyama said. “But we needed to find the right language to convey this to the U.S. in a way that this consumer can better relate to.

Although the overall strategy is to remain primarily a wholesale business, select freestanding locations in key metro areas will serve as “marketing and brand support so consumers can have a reference point,” according to Sugiyama. Currently, there is one pilot store in Huntington Beach, Calif., that opened in October 2010. A location in Miami is expected to open this year, followed by stores in Los Angeles and New York in 2013.