Hoka One One Attracting a Fashion Following

The cushioned running shoe brand has a new collaboration with Opening Ceremony.

NEW YORK — Hoka One One started to make strides in the endurance running community around eight years ago when athletes began to look for a cushioned alternative to the minimalistic shoes that were all the craze at the time.

Although the company’s oversize soles, which are about twice as thick as those of its competitors, were criticized for looking like Frankenstein shoes, their maximum cushioning soon garnered fans among marathoners and Ironman triathletes.

But now, the company’s sneakers have become a fashion industry favorite.

On Friday, two days before the New York City Marathon, Opening Ceremony released the first of three rereleases of classic Hoka styles updated in designs inspired by the store and its positioning at the intersection between streetwear and high fashion.

“Hoka is an innovative brand that marches to the beat of its own drum, balancing design and function in a distinctive way,” said Humberto Leon, cofounder of Opening Ceremony. “At Opening Ceremony, we have always prioritized individuality and bold design, so this partnership was a natural fit.”

Wendy Yang, president of Hoka, said the brand aims “to do the unexpected and we collaborate with partners who operate and think the same way. Opening Ceremony has staked out its place in the industry with head-turning designs and adherence to its principles of exploration and friendship around the globe.” 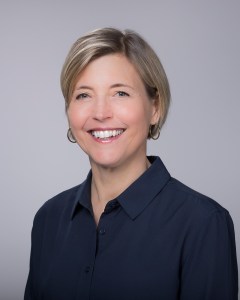 The first drop included the Hoka x OC Bondi, which retails for $185 and is an adaptation of the Bondi 5, an “early stage meta-rocker.” On Dec. 4, an iteration of the Tor Ultra Hi trail running shoe, priced at $260, will be offered, followed by a Clifton model for $150 on Feb. 6.

The Opening Ceremony partnership is one of several Hoka has created over the past year. Others include buzzy activewear brand Outdoor Voices as well as Engineered Garments. And Instagram-worthy celebrities including Pippa Middleton, Reese Witherspoon and Britney Spears have all been spied wearing the brand.

“And we have more in the works,” Yang said in an interview at the brand’s first pop-up in SoHo on Friday. “We’ve gotten the brand in front of new consumers in the fashion lifestyle space.”

But although Hoka has gained fans in fashion, the company is careful to ensure that its product “remains very authentic.”

Lee Cox, a former professional triathlete who is global vice president of marketing and sales, added: “The sneakerhead and the performance runner are looking for the same thing — that oversize look — and we started it.”

Yang said: “The consumer is savvy and wants the real thing. We’ve stayed authentically true to what Hoka is.”

With the exception of some slides, every piece in the Hoka line can be worn for running, even the Hupana, which was introduced in 2016 and earmarked more to the lifestyle market. “You can take the Hupana on a pretty significant run,” she said.

Yang said since joining the brand about four-and-a-half years ago, she has assembled a team including Gretchen Weimer, global vice president of product, that has successfully updated the design and technology of the brand, and attracted a lot of interest inside and outside the running community.

Hoka is now the third most popular shoe in the running specialty category behind Brooks and New Balance, and in August, it was actually number two, according to Cox.

“We’ve made tremendous progress over the past four years in our ability to scale,” Yang said. And while the brand may be found on the feet of elite runners, Hoka’s message is to address the everyday athlete as well as the fashion fitness crowd and anyone who is looking for a cushioned, comfortable shoe. “We also resonate with doctors and nurses and people who are on their feet all day,” she said.

And it’s showing up in the bottom line. In the first quarter ended June 30, Hoka’s parent, Deckers Brands, reported the brand posted explosive growth of nearly 70 percent, and the momentum continued into the second quarter where sales jumped 50 percent to $78.1 million, up from $52.1 million in the same period last year.

Yang said the goal is to eventually grow Hoka into a $1 billion brand. At the end of the fiscal year on March 31, it was $235 million. “We have a strategy to get there,” she said. “The U.S. is our biggest region but there’s lots of opportunity internationally.”

But getting to that number will be handled with kid gloves.

Yang said Hoka turns down more offers to collaborate than it accepts and actually has fewer wholesale accounts than it did four years ago. It focuses on specialty run and outdoor specialty stores such as Fleet Feet, Jack Rabbit and REI, as well as independent stores, rather than big boxes and department stores. It also has a strong online business.

“We don’t need thousands of points of distribution,” Cox said. “The consumer will seek you out.”

Yang knows that run specialty is not a growing channel, with growth either flat or up only modestly. So it’s about “stealing share” from other brands. “The pie isn’t getting bigger but the consumer is voting for Hoka.”

Case in point, this year, the company opted to open a pop-up on Mercer Street rather than a space at the New York Marathon Expo at the Jacob K. Javits Convention Center. “We’ll sell fewer shoes than we did at the Javits, but this way, consumers can better experience the brand,” Cox said. 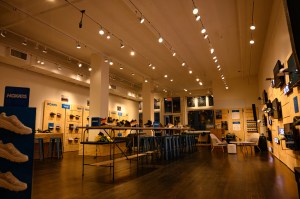 The Hoka pop-up in SoHo.

Yang said there are no plans to keep the store open or embark on a retail strategy, but it will likely do more pop-ups. “We’d rather go to where the consumer is than open a permanent location,” she said.

Hoka One One — pronounced O-nay O-nay, a Maori phrase that means “fly over the earth” — was founded in 2009 by Nicolas “Nico” Mermoud and Jean-Luc Diard, two French ultra-runners who were unhappy with the options available at that time in the running shoe market and searching for an alternative that would help them run downhill comfortably after racing up mountains. It was acquired by Deckers Brands in 2013.