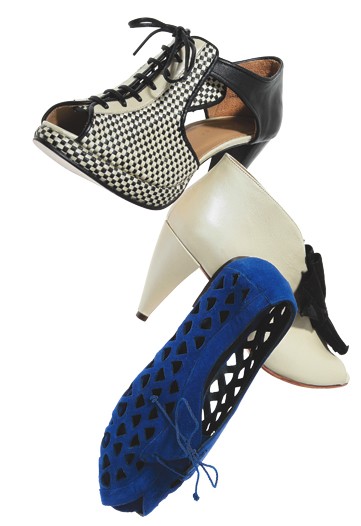 Hailing from Chile, the Philippines and New York, three accessories designers tap their heritages for a trio of spring launches.

Barbara Briones
Backstory: After watching the shoemaking industry in her country practically disappear to mass production, Chilean-born Barbara Briones set her sights on reviving the tradition. She attended the prestigious accessories design program at Cordwainers College at the London College of Fashion, and then held internships at Salvatore Ferragamo and Mulberry before setting off on her own. “For me, design is a discipline that has a function,” Briones says. “Even though what we design should be an object of desire, we cannot forget that it should also be wearable.”

Collection: The shoes have a slightly retro quality with fan pleats on booties and lace-up heels, and fun pops of details throughout, from leather pom-poms to intricate cutouts. Everything is handmade in Chile, where Briones employs 15 artisans.

Stats: Wholesales from $130 to $300; available through JA-MH Julie Agashiwala-Marketing House.

Siraks
Backstory: Adam Sirak’s route to fulfilling a lifelong dream in shoe design began in sales. He first worked at Aeffe before moving to Salvatore Ferragamo, where he is still employed as an account manager. “I used this time as a training ground to hone my vision and identify opportunities in the market,” he says. For his first collection, he took inspiration from an interesting mix of contemporary art, electronic music and architecture. “[Shoe design] is my attempt to synthesize the world around us into an object that is beautiful and useful,” Sirak adds. “The impulse to make art comes from the same source.” It’s little surprise, then, that he also designs furniture under his Sirak label, which he plans to show at Art Basel Miami in December 2011.

Collection: New York-based Sirak believes there is a void in the shoe market for sexy and sophisticated styles at prices that “make sense.” His collection, which is both sourced and produced in Brazil, ranges from more conservative narrow-toe flats and pumps to heels and ankle boots, some with cutouts and mesh.

Stats: Wholesales from $99 to $210; available through Joey Showroom.

Joyce Makitalo
Backstory: Joyce Makitalo is equally fascinated with art and semiprecious stones, and now she’s putting both passions to work. While painting full time as part of a local art group in the Philippines, she began collecting turquoise and other chunky stones. In 2008, she entered the Guild of Philippine Jewelers’ annual design competition and won in the nontraditional category, a success that has now prompted her to launch her own collection. “I see my jewelry pieces as handmade works of art,” she says. “I love boldness, exaggerated proportions, drama. My paintings are usually heavily textured, and so is my jewelry.”

Collection: Makitalo says her sculptural line, which is produced in the Philippines, is inspired by past eras and the concept of the future. “To me, past plus future equals now,” she notes. The designer works predominantly with semiprecious stones, pearls and shells, as well as 24-karat gold-plated brass and sometimes silk. Makitalo hopes to soon add fine jewelry and bags to her repertoire.

Stats: Wholesales from $200 to $600; available through Conceptor Showroom.